When thunder crackles in the Niger Delta, like the sound of a short burst of fire, the pounding rain is never far behind it.

Caught in the downpour in the town of Kogbara Dere, known as K Dere, a woman runs to the shelter of a restaurant by the side of the road. The plastic bottles of homemade petrol she was selling are beaten off their wooden perch by the heavy rain.

The smell of petrol rises up from the ground and hangs briefly in the air before being washed down a mucky lane. Following the shiny oil slick, through a warren of small concrete houses, we arrive at the home of Love Sunday.

Love gave birth to her fifth child just over a month ago. For two weeks everything was fine.

“When I had the baby there was no problem,” she says. “But then I was carrying him in my arms. He took three breaths and was gone.

Love doesn’t know how her baby died because she didn’t see a doctor. But she’s not the only one in her village dealing with this grief.

Patience Sunday and her husband Batom, who live just on the other side of town, were also expecting their first child in October.

“When the baby was first born he wasn’t breathing but then the nurse was taking care of him and he started to breathe,” she says. “They took the baby to the house to bathe him and the baby collapsed.”

He only lived a few hours.

“I gave birth and the child died at the same time,” says Barinaadaa. She still has a picture of her child framed in her home. He’s wearing a blue and pink woolly hat and looks like he could be sleeping.

It happened in 2014 but Barinaada and her husband haven’t been able to have a child since. Their farm sits on the site of the last big spill in K Dere, which happened that same year.

“Our farming area is always deep with this oil, when you go there you can perceive the odour,” says Chief Bira Saturday, who has suffered from asthma since the spill.

“The doctor said it was the odour of this oil that we are perceiving that damaged the baby in my womb,” his wife added.

Patience Sunday heard something similar from doctors while she was pregnant.

“The doctor said I should not go out in the rain or use rain water because the rain water contains oil,” she says.

Each of the parents we spoke to named one or two others who also lost young babies.

A recent report by a group of scientists at the University of St Gallen in Switzerland may hold a clue to what happened.

It found that children born within 10km (six miles) of an oil spill were twice as likely to die in their first month.

The research is based entirely on data.

Its writers took two sets of data – the Nigerian Oil Spill Monitor, which records the time and location of oil spills, and the Demographic Health Survey, which has records of the birth histories of Nigerian mothers.

They looked at children conceived after a spill and compared their health outcomes with siblings who were born before the spill.

By only looking at siblings, the research rules out many other variables like poverty, diet or health of the parents.

It found those conceived after the spill were twice as likely to die in their first month.

“The effect was much stronger than I expected – larger and longer lasting,” says Roland Holler, professor of economics at the University of St Gallen and co-author of the report.

“We found that even if there is an oil spill three or four years prior to conception, it still has a strong effect on a future new-born.”

The report doesn’t look at what exactly might be causing these deaths. There is surprisingly little research into the effect that crude oil exposure from on-shore spills has on human health.

When crude oil spills on land, it seeps into the soil, the air and the water table.

It releases certain harmful chemicals – such as benzene and toluene. Benzene is a known carcinogen while toluene can cause kidney and liver damage.

Many on-shore spills also cause fires, which released toxic fumes that can cause respiratory problems.

“When the respiratory tracts are blocked by these particulates, we see health issues like asthma, bronchitis, emphysema. We have drowsiness, loss of concentration, these are related,” says Dr Vincent Weli, an air pollution meteorologist at the University of Port Harcourt.

“For pregnant women, if they are exposed to open crude and they inhale these emissions, it will affect the forming of the foetus.”

It’s impossible to know if oil was the cause of the death of the children whose parents we met.

But it’s not hard to believe this could be happening in K Dere.

A few kilometres from the homes of the parents we met is the site of an old spill. Almost as far as you can see the rich, green land is scarred with patches of scorched, dark earth. It’s littered with glistening pools of crude oil, unmistakeable in its gloopy, sticky, blackness.

There are hundreds of oil spills every year in Nigeria from pipelines belonging to different companies but the spills in this area came from pipes run by Royal Dutch Shell.

Shell has accepted responsibility for two spills in K Dere – in 2009 and 2012 – but when approached about the contents of this report, it said it had no comment

Of the 2009 spill, it says efforts have been made to clean up. But it says they were inhibited by “the wider access challenges in Ogoniland”.

K Dere is in the Ogoniland region of Rivers State, where residents have long protested about the environmental effects of the oil industry.

Shell also said the National Oil Spill Detection and Remediation Agency, a government agency, certified the area where remediation work took place and that compensation was paid to those affected.

Of the 2012 spill, Shell says no compensation was paid because “no third party was affected”.

In relation to both spills, it said “a detailed review is underway to close out any residual issues as quickly as possible”.

Legally it is the responsibility of the company managing the pipeline to clean up any leak within 24 hours – that means the oil companies and their government partners.

Shell has long claimed that its unpopularity with local people in Ogoniland has made it difficult for clean-up workers to operate safely and has blamed many spills on criminals.

“The Nigerian government has failed to regulate these oil companies,” says Mr Holler.

“The same international oil companies behave very differently in Nigeria than they do in Norway or Texas.”

But local people have a part to play in all of this too.

Including those – such as the woman near Love Sunday’s house – who are involved in “artisanal refining” – selling petrol made from crude that is stolen from ruptured pipelines.

Whatever – and whoever – the cause of these spills is not the focus of this new research.

But what it does highlight is that there is an urgent need for more investigation into what this oil is doing to people’s health.

Until that happens hundreds, maybe even thousands, more children could be at risk. And many more parents, dealing with the loss of a young baby, will be left without answers. 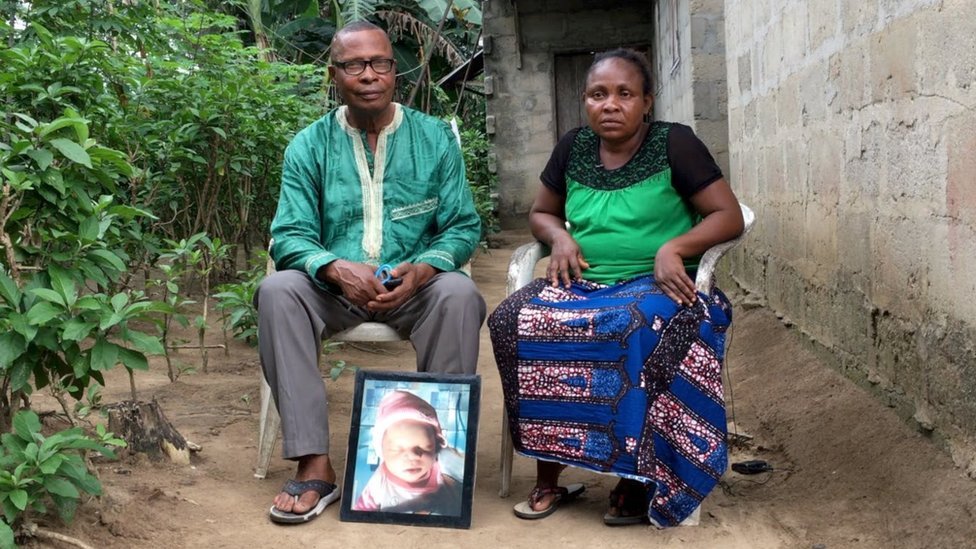 The secret HIV protection for women with ...