Mohamed Salah came off the bench to score twice and secure an ultimately comfortable away victory for Liverpool at Stoke that moves Jurgen Klopp’s side up to fifth in the Premier League.

Senegal winger Sadio Mane gave the Reds a controversial early lead, dinking the ball into the net after a marginal linesman’s call.

Stoke believed Liverpool keeper Simon Mignolet should have been sent off for a challenge just outside the box on their striker Mame Biram Diouf.

5 Live Football Daily: ‘A day we’ll remember for the rest of our lives’ – Guardiola

Mark Hughes’ side applied more pressure after the break but Egypt forward Salah gave his side a two-goal cushion with a searing volley from Mane’s cross.

The in-form forward then sealed victory by scoring the third with a composed finish when he was gifted a clear run on goal.

Liverpool overtake Spurs into fifth and are two points behind fourth-placed Arsenal, while Stoke – with just one win in their last seven league games – are three points above the drop zone at the other end.

A study by the CIES Football Observatory in September rated Salah as the most under-valued purchase in the summer transfer market, estimating he was worth about double the initial £34m Liverpool paid Roma in July.

For once, the algorithms have been borne out on the pitch.

The Egyptian reclaimed sole possession at the top of the Premier League scoring charts with his 11th and 12th league strikes of the season, goals that have arrived at a rate of one every 87 minutes.

Unleashing his pace and freshness off the bench in the 67th minute demonstrated the increased strength in depth of Klopp’s squad this season.

Salah duly made a swift and decisive impact, thumping home Mane’s cross – after the former Southampton man had raced past Darren Fletcher on the right – before latching on to a weak Erik Pieters back pass and slotting home his side’s third.

Klopp’s starting line-up – with his biggest goal threat left on the bench, along with Philippe Coutinho – was brave, but the German was vindicated by his side achieving a good result at a difficult venue while giving Salah a rest with the festive period looming.

While Salah was the key figure by the end, for much of the game it had been referee Martin Atkinson.

The official left the pitch at the end of the first half surrounded by security staff and the focus of camera lenses and jeers from the home crowd.

His interpretation of a string of midfield tussles and his dismissal of a Peter Crouch penalty appeal irritated the Stoke fans – but it was two key decisions that had escalated the mood to rage.

Firstly, Joe Gomez’s cross, which led to Liverpool’s opener, was delivered with most, if not all, of the ball having already crossed the byline.

With repeated replays unable to show whether the ball was out, it was an almost impossible call in real time.

Then Mignolet lunged recklessly outside his penalty area and sent Diouf tumbling six minutes before the break.

Stoke’s Twitter account was certain it should have been a red card, given the Senegal striker was heading round the Belgium goalkeeper towards a goal-scoring opportunity.

“That’s the key moment in the game from our point of view,” said Hughes.

“I just don’t understand why the referee and the officials couldn’t see that for what it was – a clear goal-scoring opportunity.”

Klopp took a different view. “There were two covering players in our shirt. That’s the reason, that’s the rule,” he said.

Hughes under the microscope

Klopp’s side surrendered leads against Sevilla and Chelsea in their last two matches and Stoke gave the German a second half to mostly endure rather than enjoy.

With Eric Maxim Choupo-Moting and Diouf joining Crouch in a sky-scraping forwardline, the visitors’ suspect defence often creaked under an aerial attack.

Liverpool kept their structure and their heads, though, to claim a first away clean sheet of the league season.

The Reds were grateful for old boy Joe Allen’s profligacy, however, as the Wales midfielder twice dragged shots off target from prime positions in the penalty area after the break.

Hughes will point to those fine margins and the first-half’s tight calls, but the direct style that has been successful in recent seasons now has the Potters perched perilously above the drop zone.

With just two points from their last four games and back-to-back defeats, Hughes could find he is the next manager under the microscope if the Potters’ nine-season stay in the top flight becomes seriously threatened.

Man of the match – Joe Gomez

‘They’ve got away with one’ – analysis

Former Liverpool midfielder Danny Murphy on Match of the Day: “It should be a sending off for Mignolet. Diouf is ahead of Joe Gomez and he would have put the ball in an empty net. They’ve got away with one.”

Former Arsenal and England striker Ian Wright on Match of the Day: “It’s absolutely a sending off for Mignolet. It’s a sending off.

“I am worried about Stoke, they are not getting any luck. I am concerned for Mark Hughes, it’s very precarious for managers at the moment.”

Stoke meet Swansea at home at 15:00 GMT on Saturday, with Liverpool travelling to Brighton at the same time. 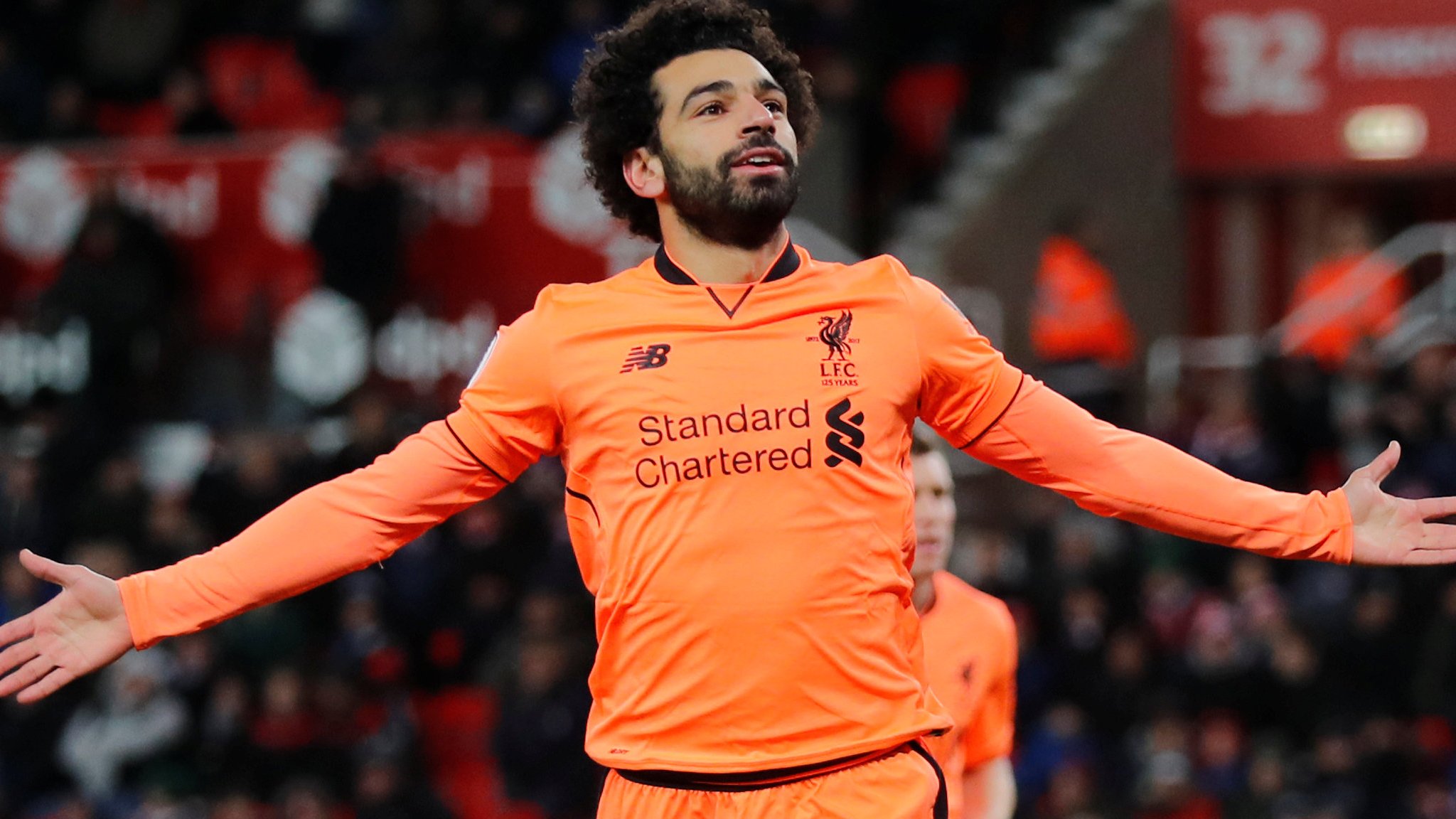