A joyful Uhuru Kenyatta taking oat of office amidst cheering supporters .Pic (AN)

Nairobi, Nov. 28, 2017 (AltAfrika)-Kenyan President Uhuru Kenyatta has been officially sworn-in for a second five-year term in front of a rapturous crowd on Tuesday as riot police sealed off an area where the opposition planned a rival gathering.

Amid thousands of cheering crowds, the president took the oath of office in the ceremony that was attended by at least 10 African heads of state and other dignitaries.

“I … do swear … that I will always truly and diligently serve the people of the Republic of Kenya,” Kenyatta said, his hand resting on a Bible

Kenyatta won a repeat presidential election on October 26 that was boycotted by opposition leader Raila Odinga, who said it would not be free and fair.

The Supreme Court nullified the first presidential election, in August, over irregularities.

The extended election season has divided Kenya, a Western ally in a volatile region, and blunted growth in East Africa’s richest economy.

Odinga’s supporters, many drawn from poorer parts of the country, feel locked out of power and the patronage it brings.

Political arguments often have ethnic undercurrents, with Odinga’s supporters pointing out that three of the country’s four presidents have come from one ethnic group, although the country has 44 recognised groups.

But such arguments seemed far from the happy crowds at the celebration, who cheered wildly as Kenyatta was sworn into office and as he received a 21-gun salute.

Before he arrived, a military band in gold and blue uniforms serenaded heads of state from Somalia, Rwanda, Uganda, South Sudan, Ethiopia, Djibouti, Zambia and other nations as they arrived at the stadium where the ceremony took place. 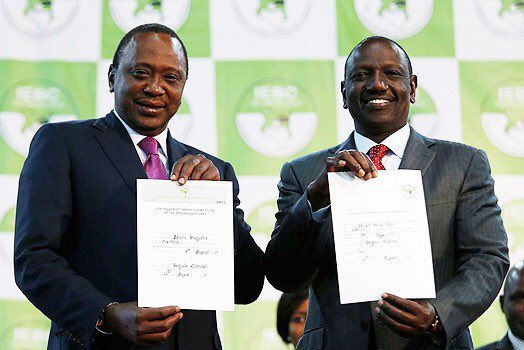 More than 60,000 Kenyatta supporters, many clad in the red and yellow Jubilee party colours and carrying Kenyan flags, filled the stadium benches.

Thousands of others waited outside. Some, chafing at the restrictions, overwhelmed police and streamed in. Officers were forced to fire teargas to control them.

Video technology to be used for the ...