Congolese giants TP Mazembe held out for a goalless draw in the second leg of the African Confederation Cup final in a cold and rainy Atteridgeville on Saturday to overcome South Africa’s SuperSport United and successfully defend their crown.

Both teams finished with 10 men at the end of a tempestuous tie which Mazembe won 2-1 on aggregate, after home success in the first leg in Lubumbashi last Sunday.

It means Mazembe win a continental title for the third successive year after taking the 2015 Champions League as well.

They played the better tactical game and showed their experience against the South Africans who were in their first ever final.

Mazembe’s line-up had three changes from the first leg in Lubumbashi that suggested they had come to defend their tenuous lead, but came out of the starting blocks in a much more attacking approach than that of their hosts.

They caught SuperSport hopping with their approach and should have been 2-0 up inside the opening quarter-hour, missing two sitters right in front of goal that – had they gone in – would have certainly killed off the tie.

After 10 minutes Rainford Kalaba beat the offside trap and was one-on-one with SuperSport goalkeeper Ronwen Williams but rushed his shot and blasted over the bar.

If that miss was not bad enough, there was further horror for the sizeable contingent of Mazembe supporters from the large expatriate Congolese community who live in South Africa.

Kalaba made a dashing run down the right with a quick burst of pace before cutting the ball back to striker Ben Malongo who slipped at the vital moment, but it fell perfectly for Daniel Adjei behind him, only for the Ghanaian import to somehow fluff his shot just wide when it seemed easier to score.

It took SuperSport at least 30 minutes to settle but as the rain continued to fall they began to win the midfield battles and set up chances.

Centre back Tefu Mashamaite, who had come forward for a free kick, was just offside as his diving header went into the net only to be correctly disallowed by the Senegalese officiating team.

In the second half, Mazembe only allowed SuperSport one clear shot on goal, dealt with competently by goalkeeper Sylvain Gbohouo.

Mazembe central defender Kasango Chongo got sent off with 10 minutes to go but SuperSport lost their numerical advantage when Thuso Phala got a straight red for a dangerous tackle. 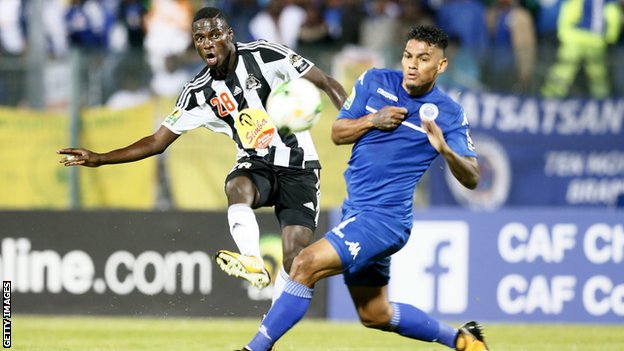