Sadio Mane: How Senegal’s quiet but steely star has shone for club and country

Rewind to 28 January 2017. In the remote eastern Gabonese town of Franceville, a murky night was about to get a lot darker for one of Africa’s brightest stars.

In the Africa Cup of Nations quarter-final between Senegal and Cameroon, the penalty shootout was level at 4-4 with every player having scored until Sadio Mane, then Africa’s most expensive player, fluffed his lines.

Mane’s wry smile turned to a heaving torrent of tears as Vincent Aboubakar, with the very next kick, drove into the roof of the net to knock out the Senegalese, many people’s favourites.

The forward crumpled to the floor before being dragged away by two colleagues, national coach Aliou Cisse among them, with Mane’s head so firmly bowed he could only see his feet and the ground beneath them.

To say he was inconsolable would have been an understatement.

“These things happen in football and the most important thing is how you bounce back,” former Senegal and Liverpool midfielder Salif Diao told BBC Sport.

“It was a hard situation for him but sometimes at the top level, you need to get hurt before you grow. He has gone to another level since that episode.”

Mane may be quiet but the 25-year-old’s personality belies inner steel, for he rebounded from his aching disappointment in stunning style for both club and country.

After helping Liverpool finish in the top four for only the second time in eight years, he later steered Senegal to only their second World Cup in history.

Three days after his miss, he was back in action for a Liverpool side that had exited two cup competitions, and won just once in seven games, without him.

Not long after, Mane was firing Liverpool to their first league win since his departure for Gabon as he grabbed both goals in a 2-0 victory against second-placed Tottenham.

He finished the season with 13 goals, his best Premier League tally, and – despite missing nearly three months because of the Nations Cup and injury – the club’s joint top scorer.

“One thing I like about Mane is that he’s got real fight, real character,” Liverpool fan Gareth Roberts, editor of The Anfield Wrap podcast, told BBC Sport.

“If the game is not going your way, you can always rely on Mane to keep going, keep plugging away, keep trying to win the match – he’s got that fighting spirit.

As of September, Liverpool were averaging 2.2 league goals and a win rate of 63% with Mane in the team compared to 1.6 and 42% without.

His international performances have been similarly key, his four goals in 10 games his best return for a calendar year.

“In the dressing room, he is a quiet guy but he’s a very nice guy and a good character to have around,” Senegal defender Pape Souare told BBC Sport.

“Sadio is a complete player. He is very fast, has quick feet and can change direction very quickly.”

All Senegalese are hoping Mane can put these skills to great effect in Russia next year.

He was 10 when the country achieved its heroics on its sole previous appearance at the finals, at the 2002 World Cup in Japan and South Korea.

With Mane’s hero El Hadji Diouf to the fore, the West Africans stunned the planet by reaching the quarter-finals, having beaten defending champions France 1-0 in the opening game on an unforgettable night in Seoul.

“When we were growing up, playing at the World Cup was a dream for all of us,” said Souare, who first played with Mane at the 2012 Olympics.

“The team in 2002 did so well and watching them has helped motivate us – now we all want to do well and make Senegal proud.”

In between World Cup qualifications there have been failures, most notably when riots broke out across Dakar – during which the the Senegalese Football Federation headquarters were ransacked – after Senegal failed to qualify for the 2010 finals in South Africa.

But earlier this month, both Senegal and Mane delivered with the livewire forward, who had been a major doubt for the game, having a hand in both goals as the Lions of Teranga won in South Africa to book their place in Russia.

Now he has the chance to be the hero, emulating the exploits of Diouf 15 years ago.

“If he believes in himself, Mane can be in the top three of the Ballon d’Or soon,” Diouf told BBC Sport.

No Senegalese has ever appeared in the top three of the Ballon d’Or or Fifa’s World Best Player, but Diouf, a former Liverpool forward himself, believes Mane has the ability to change that.

This year, he was one of just two Africans to make the Ballon d’Or shortlist, alongside Gabon’s Pierre-Emerick Aubameyang, while only Samuel Eto’o has featured in Fifa’s top three in the last two decades.

“When he goes to the World Cup and shows what he can do on the pitch, he can win the Ballon d’Or next year,” added Diouf. “He has the world at his feet.”

It’s not just the goals, the assists, the rapier pace but so often the weight of pass from Mane that impresses, while he also shows admirable desire to do his defensive duties too.

Whether he can fulfil Diouf’s prophecy or not, the sense is that the flying forward has every chance of becoming one of Africa’s greatest ever footballers.

“I’m still young and you can’t say that at 25, you know everything,” Mane told BBC Sport. “I have many [opportunities] to learn and to get better and better.” 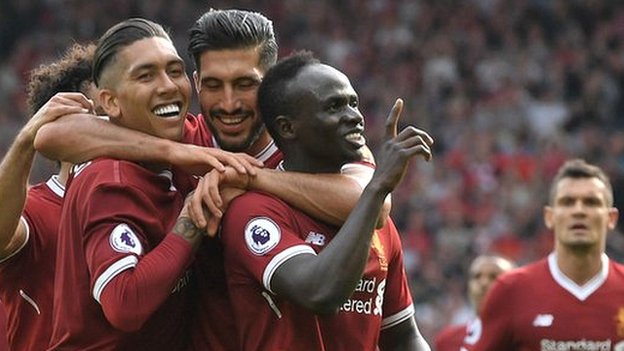