Emmerson Mnangagwa is to be sworn in as Zimbabwe’s president, following the dramatic departure of Robert Mugabe after 37 years of authoritarian rule.

The former vice-president – who returned from exile on Wednesday – will be inaugurated at Harare’s stadium.

His dismissal this month led the ruling Zanu-PF party and the army to intervene and force Mr Mugabe to quit.

The opposition is urging Mr Mnangagwa, who has been part of the ruling elite, to end the “culture of corruption”.

The news on Tuesday that 93-year-old Mr Mugabe was stepping down sparked wild celebrations across the country.

It came in the form of a letter read out in parliament, abruptly halting impeachment proceedings against him.

In it, Mr Mugabe said he was resigning to allow a smooth and peaceful transfer of power, and that his decision was voluntary.

Neither Mr Mugabe nor his wife Grace have been seen in public since Sunday, and their whereabouts are unknown.

On Thursday, several reports suggested Mr Mugabe had been granted immunity from prosecution.

State TV said he would attend the inauguration.

The ceremony will be at the 60,000-capacity National Sports Stadium in the capital, with organisers calling on Zimbabweans to come and witness a “historic day”.

Ahead of the swearing-in, Mr Mnangagwa urged Zimbabweans to “remain patient and peaceful and desist from any form of vengeful retribution”.

He fled to South Africa two weeks ago – only to return home on Wednesday’s to a hero’s welcome.

Mr Mnangagwa pledged to create jobs in a country where some estimates say 90% of people are unemployed.

“We want to grow our economy, we want peace, we want jobs, jobs, jobs,” he told cheering crowds in Harare.

Zimbabwe’s main industrial index has slumped by 40% since last week’s military intervention. The stock market has shed $6bn (£4.5bn) in a week.

Analysts say the market is now correcting itself, optimistic of a change of economic policy under Mr Mnangagwa.

However, the International Monetary Fund has warned that Zimbabwe must act quickly to dig its economy out of a hole and access international financial aid.

“As MDC, we are saying, after so many years of Zanu-PF misrule, the first thing that needs to be transformed is the culture. The culture of violence, the culture of corruption. We need to change that culture,” MDC leader Morgan Tsvangirai said.

“And for President Mnangagwa, he must realise that it is not an easy walk in the park.”

It is unclear whether Zanu-PF will govern alone ahead of scheduled elections next year, or whether a coalition government of national unity that includes opposition groups will be formed. 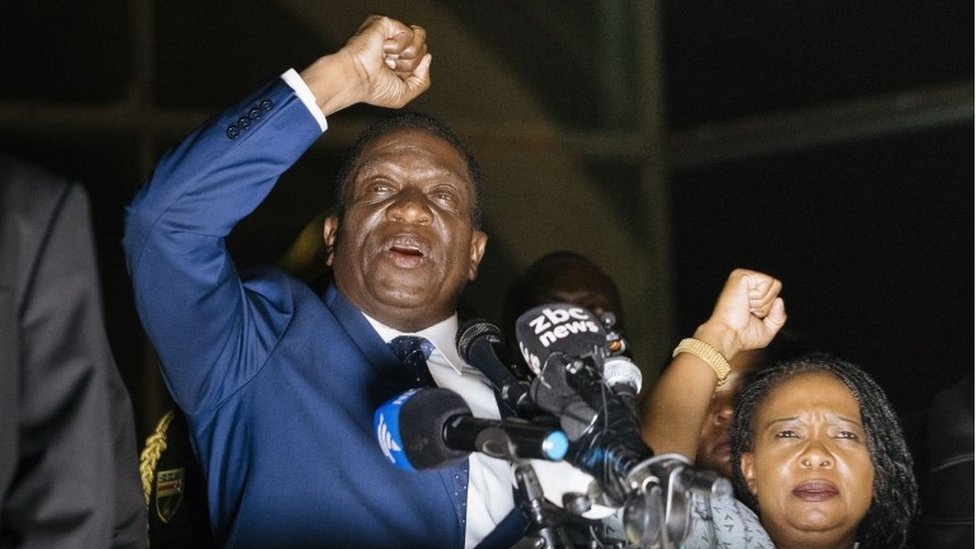