After Borussia Dortmund won this year’s German Cup, beating Eintracht Frankfurt in the final, the scorer of the decisive goal was pictured celebrating with his family.

Clutching the trophy, Pierre-Emerick Aubameyang was snapped alongside brother Willy and father Pierre, who was – appropriately enough – right in the middle.

It was a fitting portrait because the Gabonese’s success is tightly bound up with his family.

“The relations between Pierre-Emerick and Pierre are similar to those of Neymar and his father,” said former Gabon international Remy Ebanega. “He is a weighty figure in Pierre-Emerick’s life and decisions. It works and benefits everyone.

“Pierre is very protective and will look at the smallest details to ensure his son can go as far as possible. Pierre-Emerick relies a lot on his dad, who gives him very good advice because we are proud of what they are doing.”

And Aubameyang Jr does not have to go far to seek his father’s advice.

“We are often all together because Pierre-Emerick needs to have his family around him. Pierre-Emerick lives with his wife and children, and in the house right next door there is his father, his mother and me.”

A former Gabon captain, Aubameyang Sr was one of the Central African nation’s first players to forge a career in Europe.

A creative midfielder with – surprise, surprise – pace, he was part of the Gabon side that reached its first Africa Cup of Nations in 1994, then captained the side to the quarter-finals two years later.

Indeed, Gabon have never won a match at the Nations Cup without an Aubameyang in the team, the family becoming a footballing dynasty that has helped put their country on the map.

A key factor in that came when Aubameyang Jr decided – in March 2009 – to represent Gabon rather than France, whose under-21 side he had played for just a month earlier.

He was eligible for Les Bleus after being born in the western French town Laval, a stop on his dad’s peripatetic playing career and the place the family still call home.

Yet Aubameyang Jr wanted to become an African great in the mould of Didier Drogba and Samuel Eto’o, and the sole African to make this year’s Fifa Best Player shortlist is well on his way.

“We are proud because not many people knew Gabon before, but when you say you are Gabonese today, people immediately say Pierre-Emerick Aubameyang,” added Ebanega, who played alongside him from 2011-12.

Courtesy of their father, who worked as a scout at Milan, all three had come through the ranks at the Italian giants.

Eldest son Catalina made a brief appearance in the Rossoneri’s victorious 2002-03 Champions League campaign and although he never broke through, it was still some feat to play alongside Paolo Maldini, Andrea Pirlo, Andriy Shevchenko et al.

Second son Willy also played for Milan, making his debut in 2007, but also failed to break through before – like Catalina – dropping down European football’s pecking order.

Indeed the only brother who didn’t turn out for Milan’s first team – even if he did shine at junior level and sit on the first-team bench on occasions – was Pierre-Emerick, who has since achieved the most.

Having signed for Milan in 2007 and with Ronaldinho, Shevchenko and Pippo Inzaghi ahead of him, he was sent out on a series of loan deals – Dijon, Lille, Monaco, Saint-Etienne – before the latter signed him permanently in 2011.

It was in central France that the player we recognise today started to emerge, Aubameyang scoring 35 league goals in two seasons.

Offers swiftly followed – including one worth 10m euros a year to play in Qatar – whereupon his father came to the fore, later advising his son to turn down a move to Newcastle United to accept a lower salary at Borussia Dortmund, arguing Jurgen Klopp’s style suited him better.

“His father gives advice but the final decision rests with Pierre-Emerick as he is the one that must choose,” said Crespos.

The rest, as they say, is history – with Aubameyang having scored 136 goals in 204 games for Dortmund.

He has become the first Gabonese to be crowned the Confederation of African Football’s Player of the Year (in 2015) and, in May, only the fourth person in Bundesliga history to score more than 30 goals in a season.

“Other players have been greatly loved by the people but they have never played at his high level, in the Champions League nor won Africa’s Best Player award.”

Although his dad plays a huge role, there is clearly ample scope for Aubameyang’s jovial personality to shine through.

“He is very friendly, very nice and always laughing,” added Koula, who has interviewed him on several occasions. “He’s a good guy and likes to enjoy life.”

This is proven by his love of fashion, fast cars (Aubameyang bought a Lamborghini earlier this year) and tendency to don superhero-related masks after scoring goals.

“Football is entertainment and I think people forget that a little,” said Crespos. “It’s a job but it’s also a game. Pierre-Emerick loves comics and wears the masks to please the fans – which he loves doing.”

He also partly does it for his children.

The first was born six years ago whereupon life changed for Pierre-Emerick. Becoming a father inspired him as much as his father had.

“It truly launched his career a little bit,” added Crespos. “It helped him mature. He grew up. He has always told himself that he must push himself even harder for his children. And he still says that today.”

Aubameyang’s two young children are both boys, meaning the dynasty of Gabonese football’s first family might just go on a little while longer. 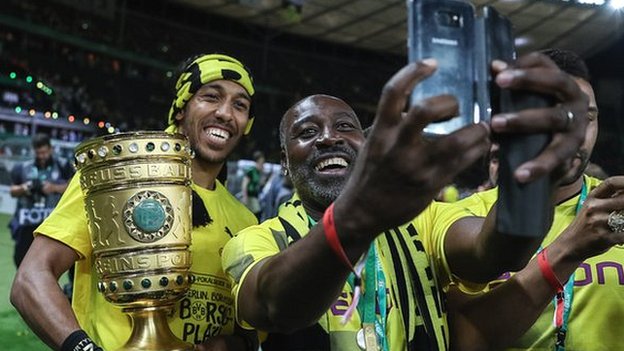