Fergal Keane: Mugabe has gone, but will Zimbabwe change?

Up to the moment itself the extraordinary session of parliament had proceeded along expected lines. Speaker after speaker rose to denounce the excesses of the president and his wife.

A female MP was speaking of how her constituents were suffering when we saw the messengers approach the speaker. They handed him a letter.

A jolt of energy swept the hall. At first there were cheers of anticipation. The speaker rose.

The next 10 minutes will remain engraved in my memory.

We strained to hear the speaker through the muffled public address system. But the words “statement of resignation” were clear. And the wild cheering, the thumping of tables, the dancing and singing told all of us who were present that the age of Robert Mugabe was over.

From the corridors outside where Zanu-PF activists had gathered, the MPs could hear loud cheers and singing mingle with their own celebrations.

On the floor of parliament – a hotel ballroom specially converted for the session – I watched MPs and senators dance, arms around each other, as the solemn procession of mace bearers left the chamber.

Among the more bizarre experiences was finding ruling-party legislators offering themselves for interview to the BBC. A week ago most foreign journalists were banned from the country.

One party stalwart, MP Keith Guzah, told me he believed real democracy would now take root in Zimbabwe. “He has gone and I am happy, happy, happy for my country.”

Another MP told me her greatest joy was that Zimbabwe had managed the transition “without the shedding of blood.” It was a comment that ignored the bloodshed and pain inflicted by her party during the decades of Robert Mugabe’s rule.

Leaving parliament I moved up through the city towards Africa Unity Square, the heart of Harare, pausing several times as I was enveloped by ecstatic crowds.

A man fell to his knees and raised his arms to the sky. A young woman, wrapped in the national flag, shouted: “Do you see this you guys? Do you see this? It is history in the making.”

On the square I ran into Ben Freeth, a farmer who lost his land and whose family were brutally tortured during the land invasions. Like so many others he was struggling to believe that the moment of Mr Mugabe’s departure had arrived.

“He was going, going, going and now he’s finally gone,” he said. As we spoke a group of revellers approached. Suddenly we were surrounded by embracing arms. “And you can see,” said Ben, “we are in this together!”

Will this spirit of unity, this freedom from fear, endure under a new dispensation? I cannot be at all certain.

The presumptive new leader, Emmerson Mnangagwa, is mired in the excesses of the Mugabe era. He was the deposed president’s loyal henchman for decades and only struck against him to prevent Grace Mugabe from succeeding to the presidency.

This was not a revolution to bring liberal democratic principles into government. It was about power.

That said, there are significant pressures on the new leader to embark on a programme of meaningful change. The corruption and tyranny of the past will not attract the international financial aid and investment that is needed to rescue the nation’s shattered economy.

Mr Mnangagwa will face a strong challenge if he tries to mire Zimbabwe in the despotism of the past. His instincts are authoritarian but he will not have the same scope for repression as Robert Mugabe.

It would be a mistake to regard Zanu-PF as a monolith. A party that turned on one leader can easily turn on another.

Perhaps most important is the attitude of the people.

They have endured nearly 40 years of fear. For the first time they have been able to speak openly and demonstrate in the streets.

The opposition – for so long divided and beaten down – is rejuvenated.

These are the moments in which new leaders emerge and are tested. With elections set for next year, all parties are already in campaigning mode.

Traditionally the polls have been times of chaos and crackdowns. Let us see if Mr Mnangagwa lives up to the promise of a more tolerant Zimbabwe. 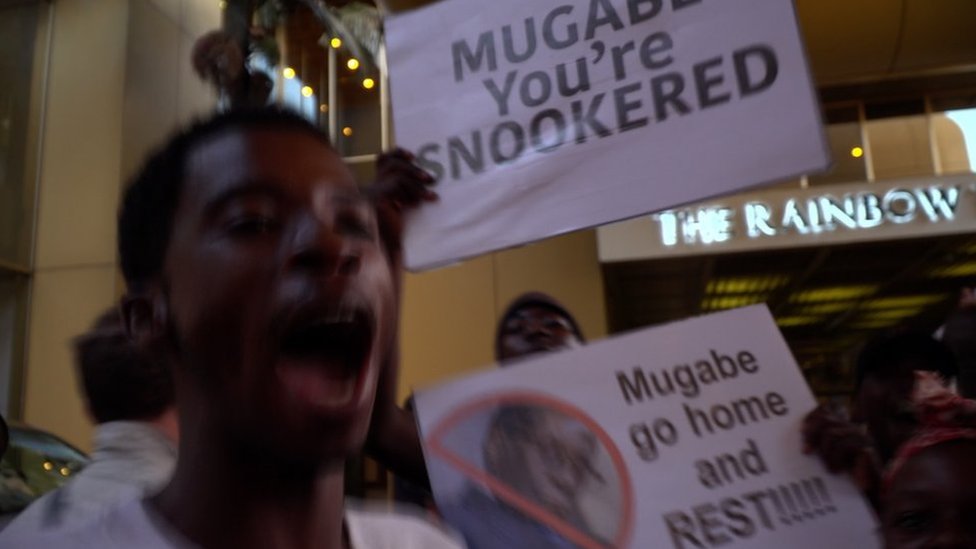 ‘I lost my land to Grace Mugabe’