Zimbabwe’s anticipated political transition is a complicated process with no obvious answers.

Since the military took control of the country last Wednesday, difficult negotiations have been under way.

They culminated in President Robert Mugabe’s defiant message on Sunday night, vowing to stay put and confounding expectations that he would resign.

“I was surprised,” says Evan Mawarire, pastor and activist behind #ThisFlag, a protest movement which began on social media.

But in hindsight, he says the statement was an attempt to make the process democratic and constitutional.

“It would have been awkward for him to resign flanked by army generals,” adds Pastor Mawarire.

Since the military took control of Zimbabwe, they’ve insisted their action was not a coup – and referred to Mr Mugabe as the “commander-in-chief”.

There have also been calls from the international community to maintain constitutional order.

But the transition many in Zimbabwe and abroad hope for is still an intricate process.

There have been calls for the President to initiate the process himself by stepping down.

But a resignation may not be the quick solution the forces behind the military take-over would have hoped for.

In the event of Mr Mugabe stepping down, the country’s constitution dictates that the vice-president would take over as acting president for a period of 90 days.

As things stand, that would be 77-year-old Phelekezela Mphoko.

The former military commander is seen as a close ally of First Lady Grace Mugabe, a polarising figure whose ambition to succeed her husband has been blamed for the current political crisis.

In recent weeks, she has been at loggerheads with former Vice-President Emmerson Mnangagwa.

His sacking was viewed as a strategy to clear the way for Mrs Mugabe to ascend.

But the military intervened in what was largely a fall-out within the ruling Zanu-PF, pre-empting her anticipated promotion.

These intrigues leave her ally, Mr Mphoko, in an unfavourable position as the likely successor.

He is in a weaker position now having been sacked from the ruling party over the weekend.

Or will Mugabe be impeached?

In the absence of a resignation, the ruling party would seek change from within.

The groundwork was laid on Sunday in an unprecedented decision by the party’s central committee to fire Mr Mugabe as party leader and install Mr Mnangagwa in his place.

The next stage is the removal of the president from power through parliament. The proponents of the process need a two thirds majority vote to succeed.

Technically, Zanu-PF has a majority in both houses of parliament, but the test will be how many Mugabe loyalists can be convinced to vote him out.

In the current environment, the party could benefit from legislators who may have been reluctant to force Mr Mugabe out, but who wouldn’t want to drown as the wave of change hits the Southern African country.

Things get even more knotty in parliament.

Derek Matyszak, a Senior Researcher at the Institute of Security Studies, says the ruling party “will need the support of [opposition party] Movement for Democratic Change, who will in turn want to cut a deal.”

It is not clear on what conditions the MDC would support their political rivals, nor whether Zanu-PF would be willing to dangle the carrot.

Senior Zanu-PF officials seem confident about their move to remove the president.

“The last thing they [Zanu-PF] would want is for it to fail,” adds Mr Matyszak. That, he says, would embolden Mr Mugabe.

Public protests could pile on the pressure

They have called for more protests to push him out of power.

Saturday saw some of the biggest demonstrations ever witnessed in Zimbabwe.

The military sanctioned this weekend’s demonstrations, and was in turn praised by the crowds for “delivering the second independence”.

But it all appears choreographed to push their agenda and give the process some legitimacy for being “people-driven”.

There is no doubt a lot has changed.

Pastor Mawarire had been leading the #ThisFlag protest long before the military intervention.

“If we had done two weeks ago what we did on Saturday, we’d have been arrested and charged with subversion,” he says.

He was arrested and charged in September for urging Zimbabweans to rise up and fight against the deteriorating economic situation in the country.

It has taken bold and daring manoeuvres to get to this point in Zimbabwe’s politics.

Engaging the reverse gear now may prove costly, particularly for the architects of change.

Defying a strongman was never going to be easy.

President Mugabe has survived huge challenges during his 37-year rule including paralysing economic sanctions imposed by the West and bruising competition from a once vibrant opposition.

In many cases, it has been at a huge cost – seen in the economy contracting and the loss of civilian lives.

But the current attempts to end his rule come from his traditional support base – his own party, war veterans and the military.

It is hard to imagine how he could survive for long. But in the midst of political turmoil, Zimbabwe remains calm and optimistic. 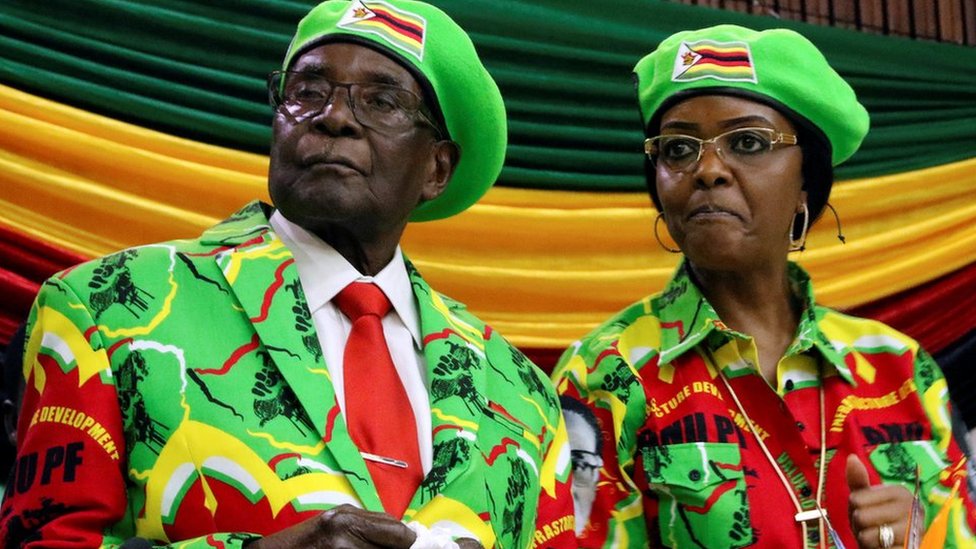