Aubameyang back for vital Dortmund clash

How to follow:
Listen on BBC Radio 5 live and BBC local radio; text commentary on the BBC Sport website

Pierre-Emerick Aubameyang returns to the Borussia Dortmund squad for a match in which Tottenham aim to secure top spot in their Champions League group.

Striker Aubameyang missed Friday’s Bundesliga defeat at Stuttgart as punishment for being late for training and shooting an unauthorised video at the club’s training ground.

Tottenham left-back Danny Rose is in contention to start.

Spurs have qualified, while Dortmund’s hopes are out of their own hands.

The German side must win and hope Real Madrid do not beat Apoel to keep alive their chances of progressing.

Rose was left out of the Spurs matchday squad for the derby defeat by Arsenal at the weekend but there are no problems with him, manager Mauricio Pochettino said.

The England international has started two games for Spurs this season after recovering from a long-term knee injury.

“I think you are trying to find some issue that is not an issue,” Pochettino told reporters.

“We analysed the player and we said to the player that we believed it was better to play another player, and [Rose] needed to wait [against Arsenal].

“But he’s doing well. He’s going to train with the group and on Tuesday we will decide if he will play.”

Dortmund look set for a place in the Europa League at best, and could do with Aubameyang finding his form.

The Gabon striker scored 15 goals in his first 12 appearances this season but has gone five matches without a goal – and was left out of the squad last week after reportedly being late for training. 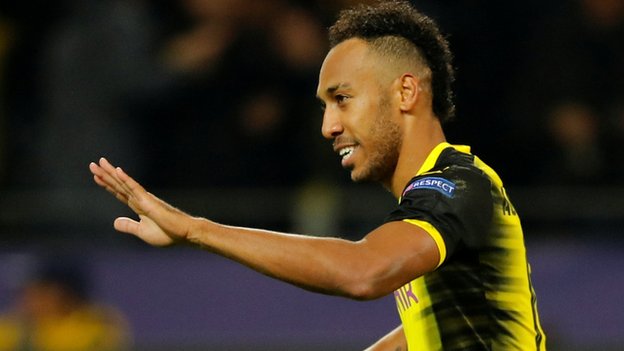