What role did China play in Mugabe coup?

A trip to Beijing by Zimbabwe’s military chief was a “normal military exchange”, China’s foreign ministry said after the army seized power in Harare. How deep are relations between China and Zimbabwe really?

The news that General Constantino Chiwenga had visited China only a few days before the military takeover in Zimbabwe was a coincidence that did not go unnoticed.

There was also speculation after China said it was closely watching developments, but stopped short of condemning President Mugabe’s apparent removal from power.

China has investments worth many billions of pounds in Zimbabwe, in everything from agriculture to construction.

But the reality is that it is Zimbabwe which is the dependent partner – with China providing the largest market for its exports and much needed support to its fragile economy.

China’s relations with Zimbabwe are deep, starting during the Rhodesian Bush War.

Robert Mugabe failed in 1979 to get Soviet backing, so turned to China, which provided his guerrilla fighters with weapons and training.

He has been a regular visitor since.

For years, Zimbabwe’s officials have tried to play off China against the West, advocating the country’s “Look East” strategy, particularly following the introduction of EU sanctions in 2002.

Indeed, a decade ago, Mr Mugabe told a packed rally at the Chinese-built national sports stadium in Harare: ‘We have turned east, where the sun rises, and given our back to the west, where the sun sets.”

However, following a controversy about a shipment of arms in 2008, Beijing decided to list Zimbabwe for “limited level” military trading.

Despite Zimbabwe’s efforts, the “Look East” strategy did not bring the investment flood hoped for and a decade later, in August 2015, Mr Mugabe openly asked for Western re-engagement in his “state of the nation” address.

Now, the reality is that increasingly Chinese and Western interests – particularly those of the UK – have become aligned.

Not far from each other in the outer suburbs of Harare, two of the biggest embassies in Zimbabwe are the British and the Chinese.

As other embassies scaled down or closed, Beijing’s expanded.

Whereas British diplomats were well connected with business, civil society and opposition figures, the Chinese invested in “technical support” of the party of government Zanu-PF, including state security and the presidency.

When it came to Zanu-PF politics and factionalism, Chinese diplomats were well connected and insightful and, like their Western colleagues, concerned about stability, a better investment climate and adherence to the rule of law.

In public, the Chinese leader said his country is willing to encourage capable companies to invest in Zimbabwe.

But in private, the message was that there would be no more loans until Zimbabwe stabilised its economy.

Chinese diplomats and businesses are waiting for better days in Zimbabwe.

China is the biggest buyer of Zimbabwean tobacco, but many other Chinese companies have found the investment climate challenging and have looked for alternative markets.

Some Chinese investors have been badly burned – on diamonds for example.

A couple of weeks ago I was in China, attending a meeting on China-Africa relations and Zimbabwe was not mentioned once.

Unlike Ethiopia, Sudan, or Angola that are strategic partners, or big markets like Nigeria, Kenya and South Africa, Zimbabwe is far from being Beijing’s new priority.

So, Beijing’s interest is in a better investment climate in Zimbabwe.

A clear transitional arrangement resulting in elections for a legitimate government in Harare is as much in Beijing’s interest as London’s.

The “Look East” and the “Re-engagement with the West” strategies have not brought about the confidence and investment that Zimbabwe needs.

What Zimbabwe requires is stable and accountable government – then investors from Asia, America and Europe will seriously consider that Zimbabwe has an investment future.

This was the message that Mr Mugabe received in Beijing in January.

And the one which Zimbabwe’s military chief also was given last week.

This analysis piece was commissioned by the BBC from an expert working for an outside organisation.

Chatham House, the Royal Institute of International Affairs, describes itself as an independent policy institute helping to build a sustainably secure, prosperous and just world. 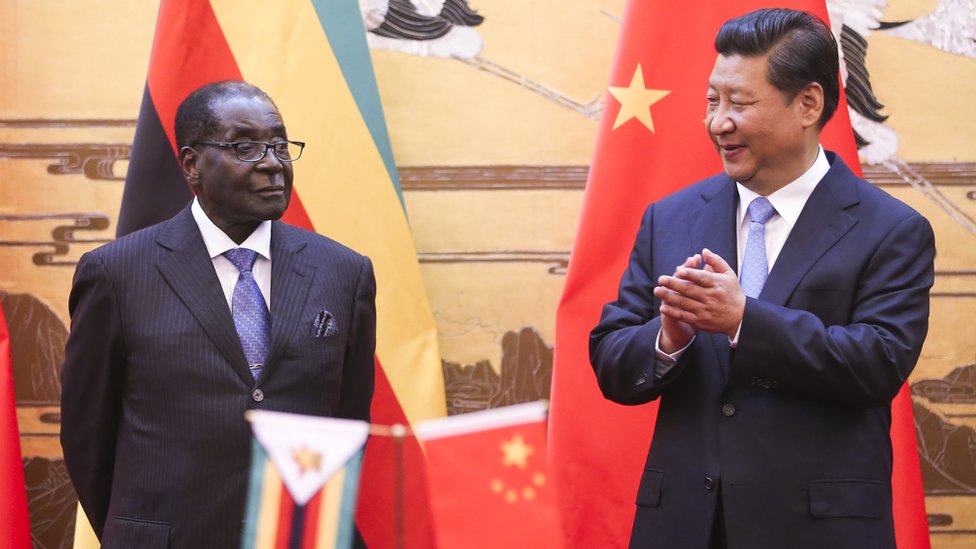