Robert Mugabe – revolutionary hero or the man who wrecked Zimbabwe?

As Zimbabwe’s economy has gone from bad to worse to disastrous in recent years, Robert Mugabe’s political and physical demise has been predicted many times but he has always confounded his many critics – until now.

However, by siding with his wife in the battle to succeed him he appeared to have gone too far, and lost the support of the military leaders who have kept him in power.

They then shifted their support to intervene on behalf of Zimbabwe’s former Vice-President Emmerson Mnangagwa, who initially made his name in the security forces.

Mr Mnangagwa, who was fired by Mr Mugabe two weeks ago, was appointed leader of Zimbabwe’s ruling Zanu-PF party on Sunday.

At the age of 93, Mr Mugabe’s health has visibly deteriorated over the past year or so, even though he was still officially going to seek re-election next year.

Before the 2008 elections, he said: “If you lose an election and are rejected by the people, it is time to leave politics.”

But after coming second to Morgan Tsvangirai, Mr Mugabe displayed more characteristic defiance, swearing that “only God” could remove him from office.

And just to be sure, violence was unleashed to preserve his grip on power.

In order to protect his supporters, Mr Tsvangirai pulled out of the second round and although Mr Mugabe was forced to share power with his long-time rival for four years, he remained – until now – president of the country he has governed since 1980.

The key to understanding Mr Mugabe is the 1970s guerrilla war where he made his name.

Even after 37 years in power, Mr Mugabe still maintained the same worldview – the patriotic socialist forces of his Zanu-PF party were still fighting the twin evils of capitalism and colonialism.

Any critics were dismissed as “traitors and sell-outs” – a throwback to the guerrilla war, when such labels could be a death sentence.

He has always blamed Zimbabwe’s economic problems on a plot by Western countries, led by the UK, to oust him because of his seizure of white-owned farms.

His critics firmly blame him, saying he has shown no understanding of how a modern economy works.

He has always concentrated on the question of how to share out the national cake, rather than how to make it grow.

Mr Mugabe once famously said that a country could never go bankrupt – with the world’s fastest-shrinking economy and annual inflation of 231 million per cent in July 2008, it seemed as though he was determined to test his theory to the limit.

Professor Tony Hawkins of the University of Zimbabwe once observed that with Zimbabwe’s former leader: “Whenever economics gets in the way of politics, politics wins every time.”

In 2000, faced with a strong opposition for the first time, he wrecked what was one of Africa’s most diversified economies in a bid to retain political control.

He seized the white-owned farms which were the economy’s backbone and scared off donors but in purely political terms, Mr Mugabe outsmarted his enemies – he remained in power.

And the tactics he and his supporters used were straight from the guerrilla war.

After he suffered the first electoral defeat of his career, in a 2000 referendum, Mr Mugabe unleashed his personal militia – the self-styled war veterans, backed by the security forces – who used violence and murder as an electoral strategy.

Eight years later, a similar pattern was followed after Mr Mugabe lost the first round of a presidential election to his long-time rival Morgan Tsvangirai.

When needed, all the levers of state – the security forces, civil service, state-owned media – which are mostly controlled by Zanu-PF members, were used in the service of the ruling party.

The man who fought for one-man, one-vote introduced a requirement that potential voters prove their residence with utility bills, which the young, unemployed opposition core electorate were unlikely to have.

In fact, the signs of his attitude to opposition were there from the early 1980s, when members of the North-Korea trained Fifth Brigade of the army were sent to Matabeleland, home to his then rival, Joshua Nkomo.

Thousands of civilians were killed before Mr Nkomo agreed to share power with Mr Mugabe – a precursor of what happened with Mr Tsvangirai.

One of the undoubted achievements of the former teacher’s 33 years in power was the expansion of education. Zimbabwe recently had the highest literacy rate in Africa at 90% of the population.

The now deceased political scientist Masipula Sithole once said that by expanding education, the president was “digging his own grave”.

The young beneficiaries were able to analyse Zimbabwe’s problems for themselves and most blamed government corruption and mismanagement for the lack of jobs and rising prices.

Mr Mugabe may well have believed it would be easier to rule a country of subservient subsistence farmers than a well-educated, industrialised workforce.

He often claimed to be fighting on behalf of the rural poor but much of the land he confiscated ended up in the hands of his cronies.

Archbishop Desmond Tutu once said that Zimbabwe’s long-time president had become a cartoon figure of the archetypal African dictator.

During the 2002 presidential campaign, he started wearing brightly coloured shirts emblazoned with his face – a style copied from many of Africa’s authoritarian rulers.

For the preceding 20 years, this conservative man was only seen in public with either a stiff suit and tie or safari suit.

Many Zimbabweans, and others, were left asking why he did not just put his feet up and enjoy his remaining years with his young family.

He professes to be a staunch Catholic, and worshippers at Harare’s Catholic Cathedral were occasionally swamped by security guards when he turned up for Sunday Mass.

However, Mr Mugabe’s beliefs did not prevent him from having two children by Grace, then his secretary, while his popular Ghanaian first wife, Sally, was dying from cancer.

But it was his second wife Grace, 40 years his junior, who ultimately proved his downfall.

Although Mr Mugabe outlived many predictions of his demise, the increasing strain of recent years took its toll and his once-impeccable presentation has begun to look rather worn at times.

In 2011, a US diplomatic cable released by Wikileaks suggested that he was suffering from prostate cancer.

But he has always led a healthy lifestyle.

Grace once said that he woke up at 05:00 for his daily exercises, including yoga.

He did not drink alcohol or coffee and was largely vegetarian.

Mr Mugabe was 73 when she gave birth to their third child, Chatunga.

If nothing else, Mr Mugabe has always been an extremely proud man.

He often said he would only step down when his “revolution” was complete.

He was referring to the redistribution of white-owned land but he also wanted to hand-pick his successor, who would of course have had to come from the ranks of his Zanu-PF party.

Didymus Mutasa, once one of Mr Mugabe’s closest associates but who has since fallen out with him, once told the BBC that in Zimbabwean culture, kings were only replaced when they die “and Mugabe is our king”.

But even his closest allies were not ready for Zimbabwe to be turned into a monarchy, with power retained by a single family. 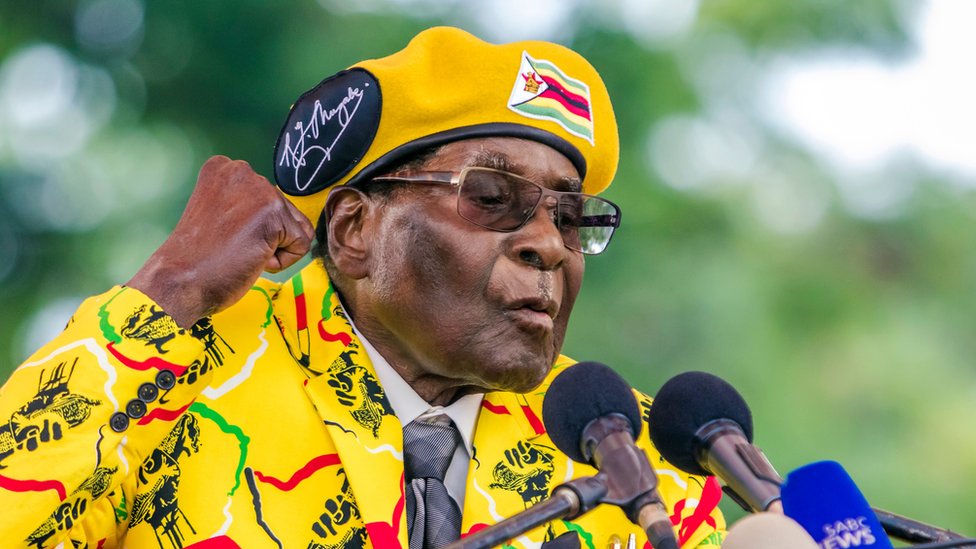