Zimbabwe’s military has said it will back a protest march on Saturday in the capital Harare against President Robert Mugabe, as long as it is peaceful.

The move comes amid growing calls for Mr Mugabe, 93, to step down, following the military’s takeover on Wednesday.

Most regional branches of the ruling Zanu-PF party have joined war veterans and liberal groups in calling for his resignation.

Earlier Mr Mugabe made his first public appearance since the takeover.

Mr Mugabe had been under house arrest for days, but attended a graduation ceremony on Friday, handing out degrees.

The army made its move after a power struggle over his successor. Mr Mugabe sacked Vice-President Emmerson Mnangagwa last week, apparently to pave the way for his wife Grace Mugabe – who is four decades younger than him – to take over the presidency instead.

The military said it was “engaging” with Mr Mugabe and would advise the public on the outcome of talks “as soon as possible”.

Who is backing the protests?

In a statement issued on Friday evening, the Zimbabwe Defence Forces (ZDF) said it had been approached by organisers of a “solidarity march”.

The statement went on: “ZDF is therefore advising the nation that for as long as the planned march remains orderly, peaceful… and without hate speech and incitement to cause violence, it fully supports the march.”

Earlier Christopher Mutsvangwa – the leader of the influential war veterans’ association, once loyal to Mr Mugabe – called for a huge turnout at the rally.

“We want to restore our pride and tomorrow is the day… we can finish the job which the army started,” he said.

“There’s no going back about Mugabe. He must leave.”

Liberal groups opposed to the president have also backed the protest.

Additionally Zanu-PF members meeting on Friday evening agreed to mobilise support for and attend the rally. The party is planning to hold a special central committee session over the weekend to discuss the crisis.

Eight of 10 regional party branches voted for Mr Mugabe to resign as president and party secretary.

What happened when Mr Mugabe appeared in public?

Mr Mugabe’s attendance at the graduation is an annual tradition but he was not expected this year.

BBC Online Africa editor Joseph Winter says the president was allowed to be there partly to keep up the pretence that the military have not staged a coup and partly because of a genuine, deeply felt respect for him going back more than 40 years.

Mr Mugabe opened the ceremony at Zimbabwe’s Open University, where he is chancellor.

One of the people he conferred a degree upon was Marry Chiwenga, the wife of the general who detained him on Wednesday, the state broadcaster reports.

Soldiers seized the headquarters of Zimbabwe’s national broadcaster ZBC on Wednesday and loud explosions and gunfire were heard.

Major General Sibusiso Moyo then read out a statement on national television, assuring the nation that President Mugabe and his family were safe.

On Thursday Mr Mugabe was pictured smiling as he took part in talks with an army general and South African government ministers at State House but sources suggested he might be resisting pressure to resign.

What has the reaction been across the world?

To get to President Mugabe’s rural home you drive along the Robert Mugabe highway. It’s probably one of the best maintained roads in Zimbabwe, like driving on a carpet. Along the way you are greeted by a plaque erected in his honour.

Kutama is a small and tightly connected village where everyone knows each other.

You can’t really tell if they’ve been rattled by the current political crisis. As we arrived there was an air of uncertainty. Mr Mugabe is respected here – to many he’s a father and a friend. A 65-year-old neighbour of his told me: “He’s kind, he’s a good man and he understands people’s plight.”

The man goes to St Francis Xavier Roman Catholic Church with Mr Mugabe, a devout Christian, whenever he visits. “He never demands special treatment. He visits people to check on their welfare,” said the man at his compound.

He said he supports the move by the army saying it’s meant to correct a broken system. “If his term goes out then there’s nothing wrong,” he said. 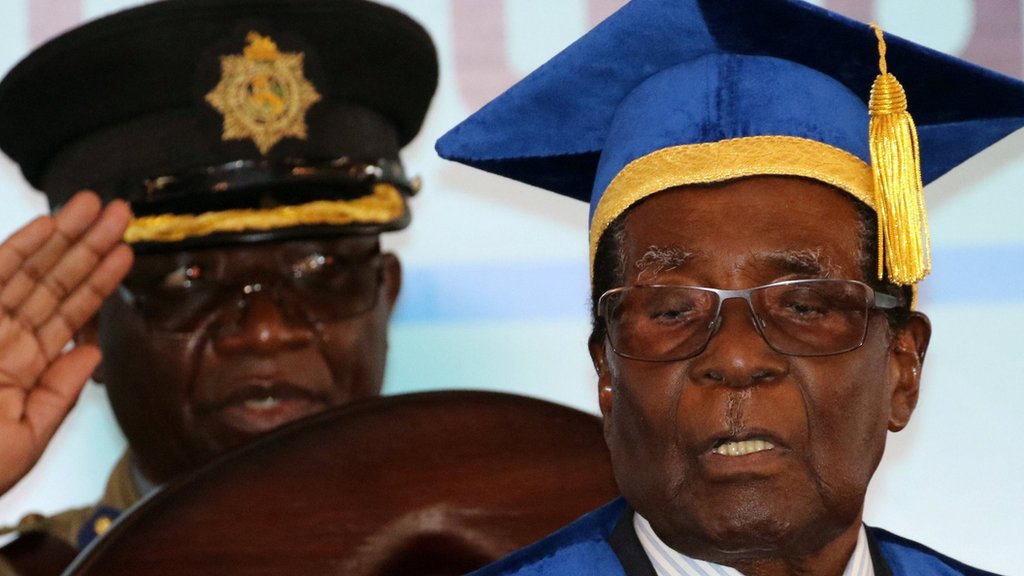