The next generation: Future Afoty nominees?

The five-man shortlist for the 2017 BBC African Footballer of the Year presents a blend of youth and experience, of promise and achievement, but who are the players who could follow in their footsteps in future years?

Ed Dove profiles five of the continent’s stars who BBC Africa are tipping to one day be nominated for the prestigious accolade.

Amid conflicts and controversies, Keita Balde has consistently demonstrated the talent that may yet make him one of Africa’s biggest stars.

After developing at Barcelona, the Catalonia-born winger enjoyed an encouraging start to life as a professional with Lazio in Italy until a contractual dispute provoked the wrath of the club’s Ultras.

Yet Balde, who excels best when cutting in from the left, ended last season with 16 goals in 31 league games, including the quickest hat-trick in Italian top-flight history – a five-minute triple against Palermo in April.

The 22-year-old’s form piqued the interest of French champions Monaco, who paid big money to secure the Senegal international.

Considering Balde’s pace, finishing and upper-body strength, comparisons with the departed Kylian Mbappe were inevitable, but injuries have prevented him from making a big early impact in Ligue 1.

Still, three goals in six outings so far is an encouraging return, and a strong World Cup with the Lions of Teranga could make him a genuine contender for next year’s prize.

As the nephew of Nigeria legend Jay-Jay Okocha, Alex Iwobi has had to contend with high expectations during the early stages of his career.

Yet the forward has rarely appeared ruffled as he’s sidestepped – often literally – every challenge that’s come his way with both the national side and at Arsenal.

He’s a more pragmatic prospect than Okocha, able to marry the professionalism and rigour required to play at the world’s major clubs with a cerebral approach to the game.

However, the 21-year-old also boasts the technical class of the Bolton Wanderers legend – if not quite to the same audacious extreme.

Just ask Javier Mascherano, who was bamboozled by Iwobi’s shimmy and feint on Tuesday as the wonderkid scored his second goal in the Super Eagles’ dazzling 4-2 win over Argentina.

The former England youth international opted to follow Okocha’s footsteps and take his place with Nigeria, who he led to the World Cup with a match-winner against Zambia.

Several players have been slapped with the ‘New Yaya Toure’ moniker in recent years, yet Franck Kessie may be the closest African football has come to a genuine heir to the midfield powerhouse.

The 20-year-old demonstrated his qualities as a prototype box-to-box midfielder with Atalanta last term, showing off his pace, strength, work rate and tenacity to help La Dea to their best-ever league finish.

He is by no means the finished article but a willingness to get the ball forward, make things happen and step up in the final third resulted in six goals last term.

While Leonardo Bonucci’s big-money move to AC Milan captured the imagination and headlines to herald in the Rossoneri revolution, the decision to sign Kessie may prove just as astute.

He joined Milan in June on an unusual two-year loan deal with an obligation to buy at the end.

Kessie has played for Ivory Coast at all levels from under-17 to the senior team and was part of the Elephants squad for this year’s Africa Cup of Nations.

Bertrand Traore was originally linked with Chelsea as far back as 2010 and made his Burkina Faso aged 15 in 2011, but the true depth of his talent is only now truly being realised.

The 10 league appearances he made for the Blues under Guus Hiddink in 2015-16 were enough to suggest that here was one of the club’s seemingly-perpetual loanees who might nail a first-team spot.

The interim coach certainly agreed, plumping for Traore ahead of more senior strikers Pato and Loic Remy, only for Hiddink’s successor Antonio Conte to loan the versatile attacker out again.

Last season, the West African played a key role as Ajax ran Feyenoord close domestically and also reached the final of the Europa League before being beaten by Manchester United.

The quality Traore showed in the Netherlands – notably his improving strength, first touch and elegance – did not convince Conte to take him back but did prompt Lyon to sign him for a bargain fee.

The 22-year-old has stepped up to the higher level of competition in Ligue 1, scoring three goals in 12 games, as he seeks to show Chelsea what they might be missing.

A key figure for Ajax last term, Hakim Ziyech has managed to maintain a consistent level of excellence despite major off-season sales at the Johan Cruyff Arena.

Davinson Sanchez, Davy Klaassen and Bertrand Traore all departed, but in Ziyech Ajax still boast arguably the outstanding player in the Eredivisie.

The 24-year-old answered the critics emphatically after signing from FC Twente at the beginning of last term, contributing 11 assists and seven goals to become the premier protagonist in Ajax’s title charge.

His technical mastery, versatility and, most notably, his intelligence make him an ideal candidate for a starring role in the Dutch giants’ midfield.

Meanwhile, he has also bounced back from being overlooked for this year’s Nations Cup to become a key component of Herve Renard’s Morocco, who have qualified for the World Cup.

Ziyech’s performance in the 6-0 destruction of Mali in September was among the World Cup campaign’s finest individual performances and highlighted him as one of the Africans to watch in Russia. 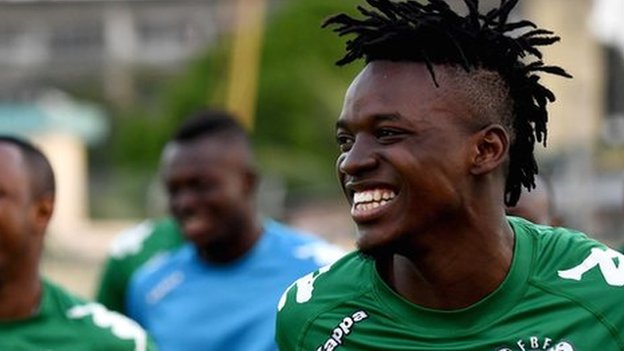