President Robert Mugabe famously declared that he would cling to power in Zimbabwe “until God says ‘Come'”. And at the age of 93, he might have expected that hour to arrive before a human intervention.

Nonetheless, following the military takeover, the leader of 37 years’ standing must now barter himself a future.

Even now, the military is still negotiating with Mr Mugabe about his possible resignation, but when – or if – he goes, can he expect a villa in the sun like fallen strongmen of the past?

Let’s take a look at what happens to deposed leaders…

Traditionally, when an authoritarian leader is ousted, they flee overseas after securing a promise of impunity. Forced or voluntary, their exile is designed to avoid conflict or civil war.

France, with its colonial history in Africa, is a popular destination. Two former presidents of the Central African Republic spent time there, as did the family of Rwandan autocrat Juvenal Habyarimana.

Others are guided by their political sympathies.

Erich Honecker for 19 years leader of the Socialist Unity Party in East Germany, fled first to Moscow, then to Chile, after the Berlin Wall came down.

In 1986, the 20-year reign of Ferdinand Marcos was brought to a close after four days of protests on the streets of Manila. US President Ronald Reagan, a former ally, urged him to step down and he fled the Philippines for Hawaii.

Saudi Arabia is a good bet for ex-dictators with few friends left. Uganda’s Idi Amin spent 24 years there before his death in 2003. And eight years on he was followed by Tunisian ex-President Zine al-Abidine Ben Ali, who found nowhere in Africa would take him.

Is it bad PR for the host country?

Does sheltering a deposed leader damage the host country’s image? The answer is: not usually. Most fallen leaders are only interested in a quiet retirement (and in some cases, avoiding the scrutiny of the International Criminal Court).

Offering exiles asylum can be good for diplomatic relations, with the host nation praised by its peers for “taking one for the team”.

“Out of concern for the exceptional circumstances facing the brotherly Tunisian people and in support of the security and stability of their country… the Saudi government has welcomed President Zine al-Abidine Ben Ali and his family to the kingdom,” it read.

In the case of Zimbabwe, African nations may be happy to take Robert Mugabe, but balk at the idea of his firebrand wife, Grace. The 52-year-old has made her political ambitions very plain and potential hosts may worry she would use their territory as a base to interfere in Zimbabwe – thus damaging relations.

Where could Mugabe go?

The Mugabe family own property in Malaysia, South Africa and possibly Dubai – but Africa-watchers say the patriarch may aim for Singapore.

“He’s been going [to Singapore] a lot for medical treatment for more than a decade now, and he seems to have a pretty good relationship with the Singaporean authorities.”

The fact that Mr Mugabe is not fleeing a bloody coup but negotiating peacefully with the army and people inside his own party, Zanu-PF, is likely to help his chances.

South Africa is the other main contender, as Mr Mugabe has a strong relationship with President Jacob Zuma and historic links to the country.

“I think Zuma’s going to find that pretty difficult to justify to his own electorate and party at the moment. I think that one’s probably not going to happen,” Dr Clark says.

South Africa is also a risk for Grace Mugabe. In August, the First Lady was granted diplomatic immunity over claims that she had assaulted a model at a Johannesburg hotel where her sons were staying. But if her husband leaves power, that protection will evaporate too.

He may not leave Africa

Archbishop Desmond Tutu once said that Zimbabwe’s long-time leader had become a cartoon figure of the archetypal African dictator. Despite that he is still popular on the continent and seen by some as a liberation hero.

Togo, Equatorial Guinea and Morocco all have past form for taking in exiled presidents, if Mr Mugabe is minded to stay within Africa.

Ironically perhaps, Zimbabwe has welcomed more than one “difficult” diplomatic exile too. Ethiopia’s Mengistu Haile Mariam, who executed thousands of suspected opponents during the 1970s, has enjoyed a lavish life in asylum thanks to his friendship with Mr Mugabe. 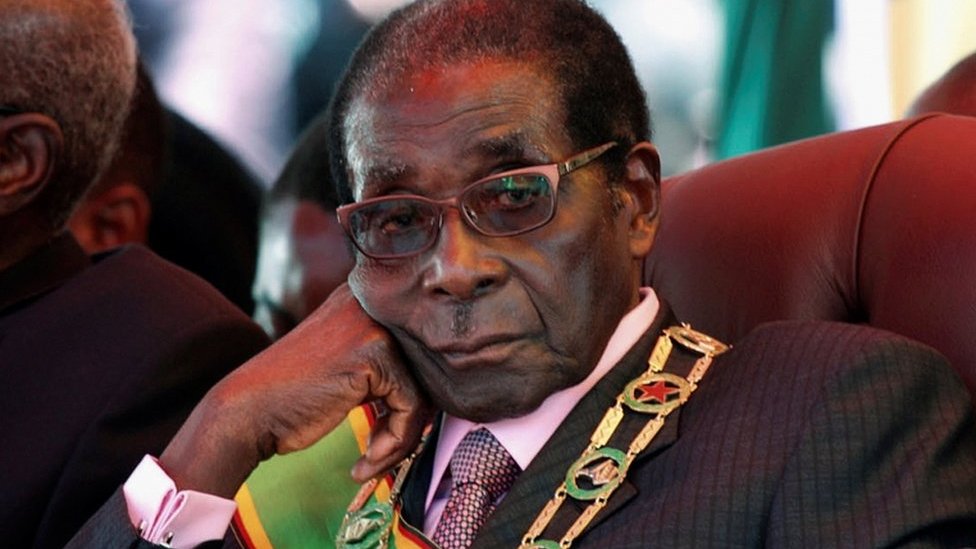