News Now
Home›News Now›Robert Mugabe: What next for Zimbabwe’s leader?

Robert Mugabe: What next for Zimbabwe’s leader?

After 37 years in charge of Zimbabwe, Robert Mugabe is currently under house arrest after a military takeover.

South African envoys and a Zimbabwean church leader are trying to mediate between him and the army. The question now is what happens next, for Mr Mugabe and for Zimbabwe?

Just hours after the Maj Gen Sibusiso Moyo announced the military takeover on state TV, there were rumours that 93-year-old Robert Mugabe would himself shortly be addressing the nation with his own statement, saying he was stepping aside.

That has not happened, but it is not out of the question.

This would clear the way for former Vice-President Emmerson Mnangagwa to step in as leader of the ruling Zanu-PF. It is widely believed that it was his sacking last week which was the catalyst for the military’s action.

The military has so far continued to refer to Robert Mugabe as “his excellency, the president”.

Many in the army, and the ruling Zanu-PF party, are long-time Mugabe loyalists.

Their issue was not with him but rather with what they saw as a power grab by his wife Grace, to succeed him.

Zanu-PF’s UK representative Nick Mangwana has suggested to the BBC that Mr Mugabe could remain nominally in power until the party congress due in December, when Mr Mnangagwa could be formally installed as party and national leader.

But Reuters news agency is reporting that Mr Mugabe is insisting that he serve out the remainder of his presidential term. That scenario would see him stay on until elections next year.

What if an agreement within Zanu-PF can’t be reached? Well, Mr Mugabe could be forced into exile.

Until recently, neighbouring South Africa would have been a natural place for him to go.

Mr Mugabe enjoys a high level of respect there, in large part because of his support for the fight against apartheid rule.

Indeed, the opposition EFF party has already called on the government to “prepare to welcome President Mugabe for political asylum”.

The Mugabes are reported to have a number of properties in South Africa.

The sticking point would be what happens to his wife Grace.

She was granted diplomatic immunity after allegedly assaulting a model in a hotel room in Johannesburg in August.

But model Gabriella Engels is trying to get the diplomatic immunity order set aside. If successful, it would mean Grace Mugabe could face prosecution should she go to South Africa.

So if not South Africa, then where?

Other possible options are Singapore and Malaysia, where the Mugabes also have properties.

4. Government of national unity and elections

The leader of the opposition Movement for Democratic Change-Tsvangirai (MDC-T) party is back in Harare after receiving treatment for cancer in South Africa, fuelling speculation about negotiations for a unity government.

This is the scenario that many in the West, and of course the opposition, would prefer.

Another opposition leader, Tendai Biti, has said that he would join a national unity government if Mr Tsvangirai was also in it.

But the military takeover was not a change of regime. It was an internal dispute within Zanu-PF, and that party is still very much in power.

The military is to a large extent the armed wing of Zanu-PF.

And the man they support as leader – Emmerson Mnangagwa – helped Robert Mugabe carry out some of his most controversial policies.

He is also, some say, more ruthless.

So it is far from clear that the ousting of Mr Mugabe would improve the lives of ordinary Zimbabweans.

The Presidential Guard are the part of the military most loyal to Mugabe.

Their compound was surrounded when the military initially took over.

Unusually, the military takeover in Zimbabwe has been driven by generals.

Some 90 senior army figures stood with Gen Constantino Chiwenga last week, when he warned of the consequences of “purges” after Mr Mnangagwa was sacked.

While nothing is impossible, this is probably the least likely outcome of all. 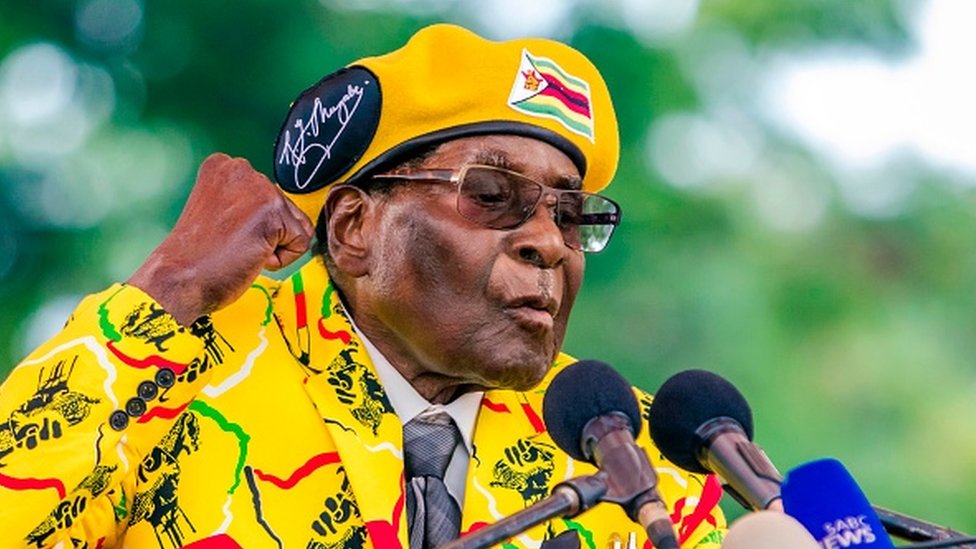 A Look Back At Zimbabwe President Robert ...

US to lift ban on elephant hunting ...