News Now
Home›News Now›Raped and tortured, the plight of African girls in Oman and the United Arab Emirate

Raped and tortured, the plight of African girls in Oman and the United Arab Emirate

Tanzanian women working as maids in Oman and the United Arab Emirates have been subjected to rape, torture and poor pay by their employers, a report by Human Rights Watch says.

More than 50 women interviewed during the research said they had their passports confiscated by their employers and were made to work 15 to 21 hours a day – figures disputed by the Omani labour ministry.

Around two in five reported physical abuse and the same proportion said they were sexually harassed or assaulted.

The Tanzania government has not commented on the findings that allege the East Africa country’s embassies did little to assist those who had sought their help.

Here are three of the women’s accounts, which include experience of sexual abuse some may find disturbing:

Dotto told Human Rights Watch that she sold farm land she had inherited from her parents to pay an agency in Dar es Salaam a fee of 200,000 Tanzanian shillings ($90; $76) for her travel to Oman in 2015.

The 32-year-old said her employer physically assaulted her, forced her to work 20 hours a day with no rest and no day off, and paid her $130 instead of $210 a month as contracted.

“Because of no interaction with my compatriots outside I started to get mental problems. I also got headaches. I thought maybe I was going to become crazy,” she said.

Then the abuse started.

“I was ironing an abaya [a woman’s long, black over-garment] and it got burned. [My employer] became very angry, I tried to tell her I am a human being. But she didn’t listen, she started to beat me, and threw water in my face.

“She ordered her son to come back with acid. I ran into the room and locked the door to prevent the son from coming in.”

When she went to Tanzanian embassy for help, she was locked up there for six months.

She remembers at one point in May 2016 there were almost 60 people in the shelter: “We were not allowed to go outside. We were locked inside the room and kitchen.”

She said after she fled to the embassy her employer demanded back $1,560 paid in recruitment costs.

Dotto said the embassy official was “literally convincing me to go back to the boss. He said: ‘If you don’t comply, then they will send you to jail. It is up to you.'”

She went to court six times to attend dispute-solution sessions with an interpreter provided by the embassy where she spoke about the abuse she had suffered.

“I had proof. I was cut on my back from the cabinet mirror and I had a ripped dress that I brought with me.”

In the end, the employer agreed to drop her claim, but Dotto had to pay $260 for her flight home.

‘The husband raped me

Atiya, who travelled to Oman in June 2015, said her employer confiscated her passport and phone, forced her to work for 21 hours a day with no day off.

She told Human Rights Watch that she could not eat food without permission and suffered daily beatings.

After three weeks, she attempted to flee, but her employer brought her back and told her: “If you want to go back you have to pay us the money we spent to bring you here” – about $890.

Her agent in Oman said they could not help.

In April 2016 she had to be treated in hospital after fainting as she had been unable to eat because of a swollen throat.

On her return to the house, she says her employers took revenge.

“The woman started hitting me and said: ‘You did not come here to get sick.’

“She called her sister-in-law who came over and they stripped me naked and beat me with plastic hangers. The construction workers could hear me screaming from outside but couldn’t help.

“When the husband came back he took me to the room and raped me anally. After he finished raping me, they took me to the brother’s house and the next day they put me on a flight back to Tanzania.

“They took the money I earned, and only gave my passport back. They just left me at the airport.”

She reported the physical abuse to the Tanzania airport police and to the anti-trafficking secretariat at the home affairs ministry – filing photos of the wounds on her back.

She said the officials told her she should have reported the abuse in Oman.

Police have arrested the agent in Tanzania who recruited her, but she feels this is not enough.

“It still hurts when I think of what happened to me. I want justice. I want compensation for all the physical violence and I want my things back – my salary, clothes, and phone.”

‘Sent back to abusers’

Mwajuma said she fled to the Tanzanian embassy in Oman in 2015 after her employer physically abused her and did not pay her salary for six months.

The embassy told her there was nothing they could do and her recruitment agent should collect her.

However, the 27-year-old said she did not want to go to the agency as she had seen the agent beat up women the day she had arrived at their office.

So the embassy obtained an assurance from the agency that she would be sent home. However, instead, it forced her to work for new employers to recoup costs.

“When I saw other girls there got hit, I was scared myself, and [the girls] advised me that ‘you better agree otherwise they will beat you up.’ So, I was scared and said, ‘OK I will work.'”

She worked unpaid for two months for two different employers, who gave her salary to her agent.

She took her case to Oman’s labour ministry, but the agent did not show up at the sessions – but eventually returned her passport.

She reported the abuse when she returned to Tanzania, but was felt she was not taken seriously.

“I felt bad seeing people going to Oman. I even went to [the anti-trafficking secretariat at the] home affairs ministry and explained what happened to me. 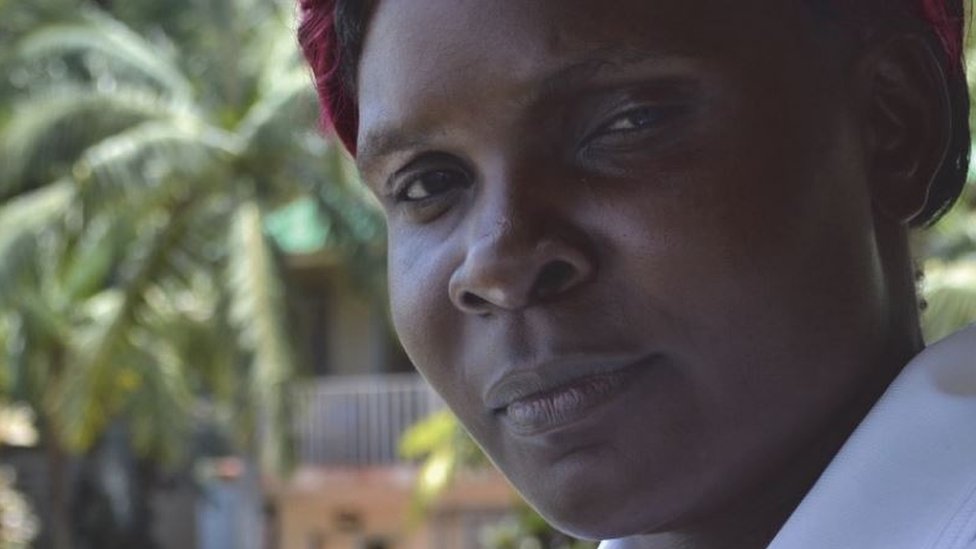