Meet the striker who saves players’ lives on the pitch

High on a shelf in an unassuming living room on the outskirts of the Czech city Brno sits a trophy with the words ‘THE BEST – FIFA’ on it.

It’s a modest place for such a prestigious award yet its equally-humble owner hopes its symbolism can change one of football’s – and society’s – greatest scourges.

Francis Kone was awarded the Fifa prize last month after the Togo international, then playing for Slovacko FC, saved the life of Bohemians’ Martin Berkovec while playing a Czech league game in February.

He did so by reacting quickest after the Bohemians goalkeeper was knocked out by one of his own players – putting his fingers inside Berkovec’s mouth to stop him from swallowing his tongue.

The act has become something of a speciality for Kone, who has saved four players this way but the presence of TV cameras on this occasion meant he has since shot to global fame.

Nonetheless, he still didn’t expect to receive the annual Fifa Fair Play Award, his name glittering brightly alongside the likes of Cristiano Ronaldo, Gianluigi Buffon and Zinedine Zidane during October’s ceremony in London.

“I was very surprised. It was like a dream,” said the Ivorian-born Kone, who has won two caps for Togo because of his mother’s nationality.

Over the shock, the 26-year-old now believes the award can help combat the scourge of racism – the striker suffered racial abuse from some Bohemian fans during the opening 30 minutes of February’s match in Prague.

“It is a message. Fair play means something like this too – to stop racism, this is fair play,” he said.

“I know what they said because they called my club to apologise. They said thanks because I saved one of their players. They apologised because they were saying bad things, like monkey and many other things.

“It’s not normal to treat a person as like a monkey – it’s incorrect. Football is fair play and I showed them that. Football is not what they are doing with racism. They have to stop it – for me, that’s the message.”

Kone’s heroic actions did not just change the attitudes of some Bohemians fans, he says, but nearly all the people he meets in a country where he has become a local celebrity.

One of Kone’s proudest moments came when he travelled with FC Zbrojovka Brno, who he joined in July, to the Czech capital last month to play at the home of reigning champions Slavia Prague.

“I was warming up and I could hear the fans say ‘it’s that guy who saved Martin’ and after that, they started clapping and chanting ‘Francis’ – not my fans, but the fans of Slavia,” he says with a sense of wonder.

“The feeling made me like ‘Oh My God’ and I was not concentrating on warming up – I was away – because it was amazing, very amazing.”

From racial abuse to widespread applause, it’s quite a leap, quite a journey.

After starting out at FC Bibo in Ivory Coast (the same academy where his late friend Cheick Tiote came through), Kone played in Thailand, Oman, Portugal and Hungary before moving to Czech Republic.

He says he was racially abused in only his third game in European football, when his Portuguese side Olhanense played at the home of two-time European champions Porto in December 2013.

A combination of the abuse and shock – “it was very scary” – meant he almost walked away from football there and then, but he stayed on and now believes he can play a vital role.

“I am a Christian, I pray a lot, I fast a lot so I think God is trying to give me a message. Maybe I am a little angel sent by him. There are some people now who see me as an angel – I have a lot of messages like this. I say ‘I am just Kone Francis and it is God who is doing this, not me.'”

Like many, Kone is flummoxed that he has saved the lives of four people in a similar way, describing it as “not normal – but something extra-normal.”

After hearing how two people in his neighbourhood died in such fashion, he was inspired to learn from an older friend who stopped another death by preventing the individual from swallowing their tongue.

He has scars on his fingers and surprisingly high up his hand, explaining that people who are slipping away find a lot of power “because they are fighting for their lives” – the problem being that any potential saver tends to have to slip his fingers between teeth that often want to clench tightly shut.

“Martin bit me but the second guy bit me so much – it was horrible,” he says. “All his mouth was blood – blood from his mouth, blood from my fingers.”

Nonetheless, he still wasted no time in helping Martin and the pair have stayed in touch, meeting twice despite their conversation being limited by language.

“Unfortunately my English is not that good, or it’s as good as his Czech, but we talk somehow so we go for a coffee,” Berkovec, who now plays for MFK Karvina, told BBC Sport.

“I remember only what happened before the collision and then I blacked out. The following day I saw what had happened, through the media, and it was horrible. I thank him for saving my life.

“He also got the (Fifa) prize for it so I congratulate him, even though it would be much better if that hadn’t happened at all.”

Despite the knock-on effects of his actions in south-eastern Prague in February and his belief in the message the Fifa awards sends to racists, Kone shares the sentiment.

“I don’t want this to happen again – really – because it’s so dangerous and so horrible,” explains one of football’s quiet heroes. “But if it happens, I have to do what I can do.” 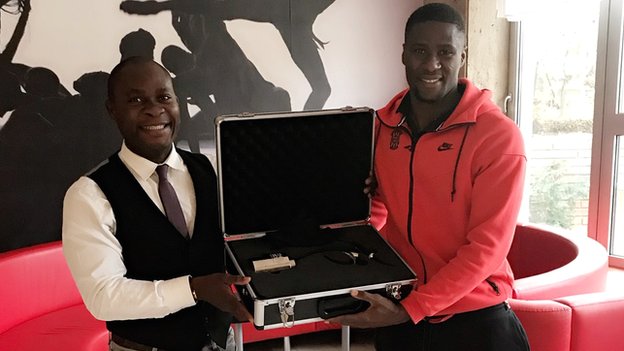