For the BBC’s African Footballer of the Year season, BBC Africa Sport has selected the top 10 unforgettable African moments in Premier League history.

Unforgettable – not greatest – so if you want to let us know what we have missed out, you can have your say at the bottom of the page:

On 19 August 1992, four days after the first round of Premier League games, Zimbabwe’s Peter Ndlovu made history. Coming on as a second-half substitute against Tottenham Hotspur, the Coventry City striker became the first African to play in the Premier League.

Nearly 300 Africans have followed him.

For the record, Coventry won 2-0 – and Africa’s first goal in the Premier League came on 2 September, when Ndlovu netted in a 2-1 win at Sheffield Wednesday.

Then there are Tony Yeboah’s goals.

His sensational volley against Liverpool in August 1995 will never be forgotten – Yeboah describes it as his favourite – but it was his blistering strike at Wimbledon the following month that was named goal of the season.

The story goes that a man masquerading as George Weah, the only African to be crowned Fifa’s World Footballer of the Year, phoned around England’s leading clubs before striking gold with Saints boss Graeme Souness, who was led to believe ‘Weah’s cousin’ was a) rather useful b) had played with the Liberian at Paris St-Germain.

Amidst a striker shortage, Dia was thrust on as a substitute against Leeds United. The student lasted 53 minutes before being subbed, and leaving the Premier League for good.

Last year, the Bleacher Report tracked him down to London.

Nigeria’s Nwankwo Kanu was not the first African to score a Premier League hat-trick, but he certainly scored one of the most memorable.

With 15 minutes left, Arsenal were 2-0 down at Stamford Bridge, where Chelsea had not conceded a league goal all season.

By full-time Arsenal had won 3-2, Kanu flighting home a beauty in the final minute from the tightest of angles, to leave the commentator screaming: “Can you believe it? Simply extraordinary.”

Not since Preston North End in the 1880s had an English team gone through an entire league season unbeaten – until Arsenal rewrote history.

To understandable acclaim, Arsene Wenger’s Gunners went through the 2003-2004 campaign with a record of 26 wins and 12 draws.

Three Africans were in the team – Kanu, Lauren and Kolo Toure. The latter played in all but one match of a truly staggering season.

Before Didier Drogba arrived at Chelsea in 2004, the club had been crowned English champions just once in their history.

They have added five more since – four of those with the Ivorian to the fore.

Having won the league title in his first two seasons, he became the first African to top the Premier League scoring charts in 2007 – a feat he repeated three years later.

He remains the only African to have scored a century of Premier League goals.

Drogba’s closest African rival in terms of Premier League goals is Emmanuel Adebayor, who has 97. The aftermath of one is destined to be talked about for decades.

The Togolese left Arsenal for Manchester City in an acrimonious move in July 2009 and two months later, when City hosted Arsenal and Adebayor scored, the striker ran the length of the pitch to taunt his former fans.

He later apologised – saying emotions had got the better of him – but he also claimed Gunners fans had insulted him for the whole game.

Transfer deadline day has produced many memorable moments, but few are talked about as much as Peter Odemwingie’s ill-fated drive from Birmingham to London in 2013, as he sought to leave West Brom for QPR.

The big problem was the Nigerian had jumped the gun – leaving West Brom without permission to secure a proposed move that ultimately collapsed.

“Total lunacy” was how his manager he described it at the time. Endless mirth for the fans, though.

He has driven Manchester City to league and cup wins and proven a midfield machine capable of hitting 20 league goals in a season.

However, he may equally be remembered more for ‘Cake-gate’, when his agent implied the Ivorian was leaving after the club failed to mark his 31st birthday in suitable style.

Current City boss Pep Guardiola knows the way to Toure’s heart, though, and said he would get as “big a birthday cake as possible” for his big day this year.

Even fewer expected the Algerian to drive the club towards the Premier League’s least likely success – a fairytale triumph in 2016.

The mercurial Mahrez became the first African to win the prestigious PFA Player of the Year award – some accolade given the torment some of his peers suffered at his hands during the season. 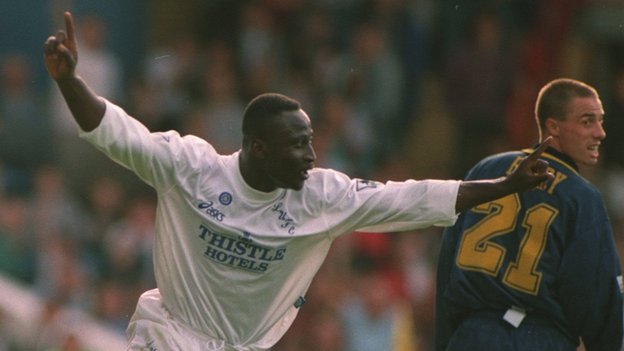 African Footballer of the Year 2017: Pierre-Emerick ...