Uganda is often called one of the best places in the world to be a refugee because of its welcoming policies. But how do you rebuild your life – and start making money – having left everything you knew and held dear? The BBC’s John Murphy has been finding out.

“Starting any business is not easy because it’s difficult to get money at the beginning,” Penina tells me.

Most entrepreneurs would tell you that. But imagine how much harder it is when you are living in a refugee settlement in northern Uganda, having escaped war.

“It’s not easy for the refugees to even get money,” she continues.

“You see, they sell their own things like beans, they pay you with [cooking] oil, because there’s nothing, there’s no money.”

Penina fled South Sudan with her four children. She didn’t want to. “I was not going to leave because I love my country, I love my home,” she says.

“But the worst thing is when I saw a woman and a child being killed. How could I, as a woman, continue to stay in South Sudan when such things are happening, when women and children are being killed?”

Her husband stayed behind. She says he refused to come and, for a short while, they communicated by phone. But his number no longer works and she doesn’t know what has happened.

According to the United Nations refugee agency, the UNHCR, around 85% of the more than one million South Sudanese refugees now in Uganda are women and children.

They do get some help from the UN, the international aid agencies and the Ugandan government.

They are given plots of land – wild bush land – which they have to clear and build shelters on and, when they can, grow vegetables in.

They are also given plastic sheeting to construct their homes with, some cooking utensils and food rations.

However, a lack of international help has meant that in the last year those monthly food hand-outs have been cut, and many refugees we met complained that the food does not actually last the month.

That is where Penina has an advantage.

She has a skill. She was a hairdresser back in Yei, in South Sudan, and she has brought that skill with her.

She has also been a refugee in Uganda before, in the late 1990s, when there was fighting between north and south Sudan.

It means she knows how things work in Uganda and she has a network of local friends.

Uganda saw the largest number of refugees of any other country in 2016, UN figures show.

‘Why I gave my land to a refugee’

Is Uganda the best place to be a refugee?

One in particular, who helped her set up her hair salon in Imvepi refugee settlement.

The salon is, in fact, a shack made of wooden poles and UNHCR plastic sheeting.

Hanging from the poles are pictures of hairstyles and an assortment of hair extensions.

There is also a large poster of Jesus Christ. When I ask Penina where her energy comes from, she looks to the sky. “That’s God,” she says.

I point out that it is her too.

“Yes,” she replies. “But you have to use your brain. God has given me all this. I have to use my brain to do something, rather than stay idle.”

She says business is slow.

Sometimes the only way for her to make money, so that she can buy the things she needs for her business, is to take those food rations the refugees give her in payment and to sell them, to get some cash.

“What can we do? It’s the condition we are in.”

But her salon has proved therapeutic. “It’s good when you just chat together,” she explains.

“You forget about the stresses and other things in South Sudan, the bad things people were doing.”

Not far away, I come across a young man surrounded by piles of charcoal, which crunches underfoot.

It is widely used by both refugees and Ugandans for cooking.

He comes from the local town, Arua, which in the rainy season can be about an hour-and-a-half away, driving along muddy roads.

He explains how the South Sudanese refugees “cure” the charcoal and he buys it from them, then transports it back to town to sell at a profit.

“Charcoal is very expensive in town. But, due to the conditions, they sell it cheaply,” he says of the refugees.

“Some even sell their own stuff, the things given to them by the UN. We get a lot of profit from them.”

Yet that is a dangerous business, he tells me.

The Ugandan government does not like people profiting from the goods handed out by the UN and the police could arrest you if they find you trading in refugee items.

His positivity is infectious. “Look around,” he tells me. “We are all mixed up in the market, South Sudanese and Ugandan, doing business so that we can survive better.”

It is true. Swathes of the north Ugandan countryside are being transformed.

It is part of the reason why the Ugandan government has been so welcoming to the refugees.

What was unproductive bush land in a poor region is being cleared, markets are sprouting up in the settlements and small businesses are growing roots.

With little sign of peace returning to South Sudan anytime soon, the refugees have to make new lives for themselves.

And some local Ugandans are benefiting too. 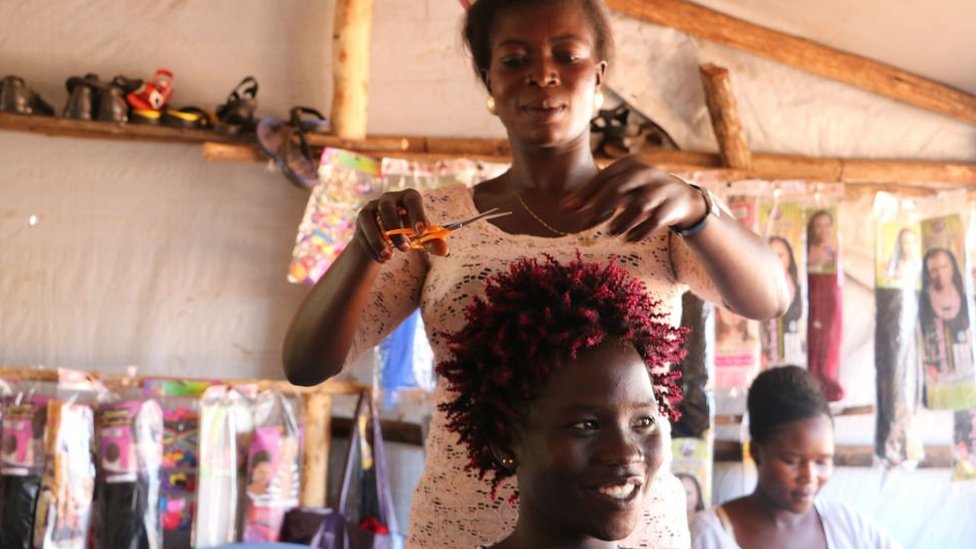