There are suspicions that they may have been sexually abused and murdered as they attempted to cross the Mediterranean.

Five migrants are being questioned in the southern port of Salerno.

Twenty-three of the dead women had been on a rubber boat with 64 other people.

Italian media report that the women’s bodies are being kept in a refrigerated section of the warship. Most of them were aged 14-18.

Most of the 375 survivors brought to Salerno were sub-Saharan Africans, from Nigeria, Senegal, Ghana, The Gambia and Sudan, the daily La Repubblica reports.

Among them were 90 women – eight of them pregnant – and 52 children.

There were also some Libyan men and women on board.

People-smuggling gangs charge each migrant about $6,000 (£4,578) to get to Italy, $4,000 of which is for the trans-Saharan journey to Libya, according to the Italian aid group L’Abbraccio.

Many migrants have reported violence, including torture and sexual abuse, by the gangs.

In the year to 1 November, 150,982 migrants arrived in southern Europe by boat from North Africa, the International Organization for Migration (IOM) reports.

The others arrived in Greece, Cyprus or Spain. The total is less than half the 335,158 who arrived in the same period of 2016.

Last year the total for Greece was higher than that for Italy. 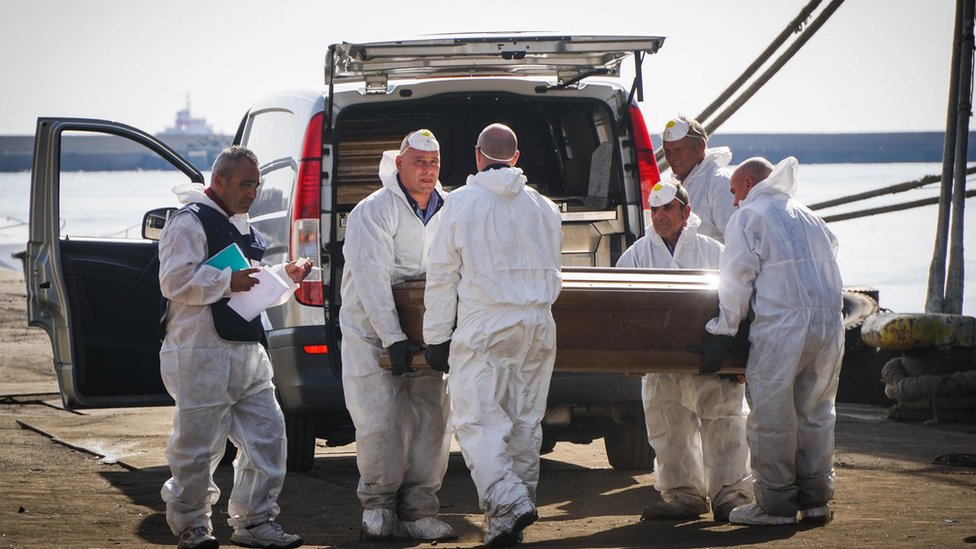