Uzoho, 19, has been named in the 24-man squad to take on Algeria in a World Cup qualifier and then a friendly against Argentina this month.

“It probably wouldn’t have happened if I hadn’t been promoted to the first team at Deportivo,” he told BBC Sport.

“They’ve really helped me and hopefully I can repay the faith,” he added.

Uzoho’s national call-up comes off the back of a strong start to his Deportivo career and Nigeria’s quest for additional goalkeepers.

He became the youngest foreign goalkeeper to ever play in La Liga last month.

“I feel I owe the former manager [Pepe Mel] a lot as well and I am grateful to the players and management of the second team and senior side and I thank God for his favours,” said Uzoho.

In-form Henry Onyekuru, who has scored seven goals this season on loan at Belgian side Anderlecht from Everton, returns as part of an experienced 24-man squad named by coach Gernot Rohr.

He has also handed a maiden call-up to Norway-based Chidiebere Nwakali, who like Uzoho, won the U-17 World Cup with Nigeria in 2013.

Chelsea’s Victor Moses is still recovering from a hamstring injury, while coach Rohr will also be without injured regular left-back Elderson Echiejile and striker Odion Ighalo.

Nigeria have already qualified for next year’s finals in Russia with both Moses and Echiejile a key figure.

After facing Algeria in Constantine on 10 November, Nigeria travel to Russian city of Krasnodar for the friendly with Argentina on 14 November. 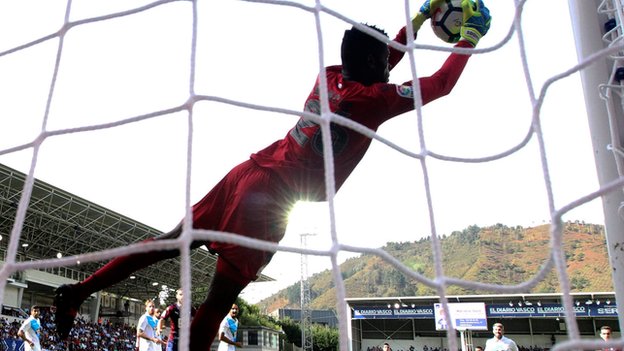 Ex-Catalan leader turns self in to Belgian ...

Who are the detained Saudi businessmen?