Madagascar is facing the worst outbreak of plague in 50 years.

There have been more than 1,800 cases and 127 deaths since the start of August, according to new figures.

The island off the south-east coast of Africa is used to seeing about 400 cases of mostly bubonic plague in the same rural areas every year.

But this year it has developed into the deadlier pneumonic version and spread to much more populated areas, including the capital.

Madagascar plague: WHO in huge release of antibiotics

The WHO describes the plague as “one of the oldest – and most feared – of all diseases”.

Historically, plague has been responsible for widespread pandemics with extremely high numbers of deaths.

It was known as the Black Death during the 14th Century, killing more than 50 million people across Europe.

The good news is that a simple short course of antibiotics can cure the plague, providing it is given early.

The current outbreak in Madagascar is also slowing down, with the number of cases falling in the past couple of weeks.

But the World Health Organization is warning further spikes could be on the way.

It says “despite the relative ease of treatment, plague’s association with the Black Death weighs heavily on the popular conscience – and is regularly cited in media reports and tabloid headlines about outbreaks”.

So how did this outbreak become the worst in recent times?

“An outbreak of plague no longer unfolds in the manner portrayed by our history books,” said Dr Sylvie Briand, director of WHO’s Infectious Hazard Management Department.

“Plague is an old disease, but the challenges it poses today are contemporary and fundamentally different from what we had even 40 years ago.”

The medical charity Medecins Sans Frontieres has been responding to the outbreak in one of the worst hit areas of Tamatave.

Dr Tim Jagatic told BBC News the outbreak had spread to populated areas when a man infected with bubonic plague had travelled from the highlands to the capital and then on to the coastal city of Tamatave by bus.

“He had the bubonic form of the plague and entered into one of the major cities, where the bubonic version of the disease had the potential of turning into the pneumonic form without treatment.

“He was in a closed environment with many people when he started to develop severe symptoms, and he started to transmit the pneumonic form of the disease to others.”

Dr Jagatic said this had happened in late August, which is outside the normal plague season of September to April, in an area that never usually saw pneumonic plague.

It meant people weren’t expecting the plague – and certainly not the type that could spread from person to person.

“So it wasn’t recognised until later,” he said, allowing the disease to “proliferate over a period of time unabated”.

This index case infected 31 other people, according to the WHO, four of whom died.

It wasn’t until a couple of weeks later that an outbreak of the plague was detected and officially confirmed.

Since then, the country’s Ministry of Health and other health agencies have swung into action, and cases have started to decline since mid-October.

The risk of this outbreak spreading globally is considered low, and the WHO has advised against any travel restrictions.

“Most people haven’t experienced plague on this scale before… so it’s putting a lot of anxiety and strain on the health system,” said Olivier Le Polain, an epidemiologist from the UK’s Rapid Support Team, which is helping the Madagascan government with its response.

“There’s also fear in the population.

“There’s an on-going risk going forward because the plague endemic season doesn’t end until the end of April so, knowing it’s in areas such as the capital, we need heightened vigilance.”

The WHO describes the overall risk for the island as “very high”.

There are also serious concerns about the potential spread of the disease beyond Madagascar.

Frequent travel by air and sea to and from neighbouring countries means the risk of the disease spreading to places including Mozambique, the Seychelles, South Africa, and Tanzania is considered “moderate”.

The WHO says it is helping those countries to step up surveillance and prepare for a potential outbreak.

However, it says, the overall risk of the plague spreading globally is low.

WHO official Tarik Jasarevic told BBC News the organisation “advises against any restriction on travel or trade to Madagascar based on the current information available”.

“The evidence tells us that the risks associated with shutting borders are higher than keeping them open.”

Back at the MSF treatment centre in Tamatave, Dr Jagatic said the country was now much better prepared as the plague season continued.

“Outbreaks are always difficult to predict. Right now we’re seeing a decrease in cases, but that doesn’t mean this is over,” he said.

“We’re prepared for a spike, and want to make absolutely sure we won’t be caught off guard again.” 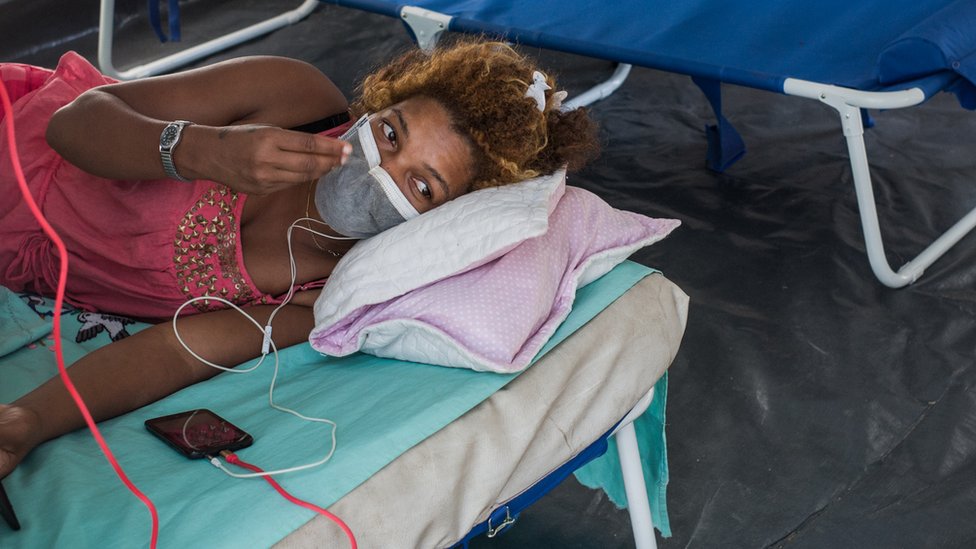