Enough is enough. That was the message on Monday, as (mostly white) activists carried crosses and blocked roads to demand better protection for South Africa’s farms, after they were targeted in a spate of murders.

The South African Police Service has argued that the majority of attackers are motivated purely by a desire to rob farmers, but the country’s Institute of Race Relations has warned there may be a racial element to some of the attacks.

There’s a sense in some quarters that white farmers are being targeted in particular.

Many have claimed in recent weeks that South Africa’s farmers are more likely to be murdered than the average South African.

Neither of the claims above is supported by reliable data. So what does the evidence say?

According to the best available statistics, farm murders are at their highest level since 2010-11.

South Africa’s Police Service says 74 people were murdered on farms between April 2016 and March 2017, up from 58 in the previous year.

That’s broadly in line with figures collected by the Transvaal Agricultural Union (TAU). They rely on media reports, social media posts and tip-offs from their members, which means they don’t pick up every murder or attack that takes place.

It is worth noting that both the police and the TAU are counting murdered farmers, farm workers and visitors to farms – irrespective of race.

But a rise in the number of farm murders doesn’t tell us anything about whether farmers are more at risk than average South African.

To do that, we need to calculate the murder rate – the chance of being murdered.

It’s easy enough to tell you what the average is for South Africa.

According to Statistics South Africa’s mid-year estimate for 2016, there were 55,908,900 people in South Africa.

Are farmers at greater risk than this national average?

The truth is, we don’t know. We can’t calculate a meaningful murder rate for farmers, because we don’t know how many there are.

Or, do we restrict ourselves to the 32,375 commercial farmers counted in the country’s last agricultural census in 2007?

That’s what AfriForum, a group that campaigns for the interests of Afrikaners in South Africa, appears to have done.

It has estimated a farm murder rate of 156 per 100,000 that has been widely quoted in recent days.

It appears to be calculated as follows.

First, take the 50 murdered farmers counted by the TAU in 2016 (which excludes murders of family members, employees and visitors).

There are problems with this approach.

First, the data is very old, so the number of farmers may be different now.

Second, to exclude murdered family members, employees, and visitors to the farm from such an analysis misses part of the picture of what is happening on South African farms – but we don’t know how many of those people there are.

Third, the 2007 census did not include small, non-commercial farms – but some of the murders counted in the figures did take place on smaller farms. By leaving them out, the murder rate comes out higher than it should.

Can we talk about race?

We simply don’t know what proportion of people on South Africa’s farms is white.

The closest we get is the 2016 Community Survey of agricultural households. Of the nearly 200,000 households whose agricultural activity takes place on farmland, about 54,000 have a white person at the head of the household.

The problem is, we don’t know how many people are in each household or how many of the households are racially mixed.

So we don’t know how many white people there are on South Africa’s farms. And that means we can’t work out how likely those white people are to be murdered.

We could try and guesstimate, by making various assumptions about how many farmers there are now, how many are white and how many people live on their farms.

South Africa’s Institute of Race Relations has attempted to do so here.

But as they explain in their analysis, small changes to those assumptions can make huge differences to the estimated murder rate. On some sets of assumptions, the farm murder rate is no higher than the national average.

In short – we have no clear idea about the murder rate on South African farms.

And because of that, the claim being made by protesters about farmers being more likely to be murdered is not supported by reliable data. 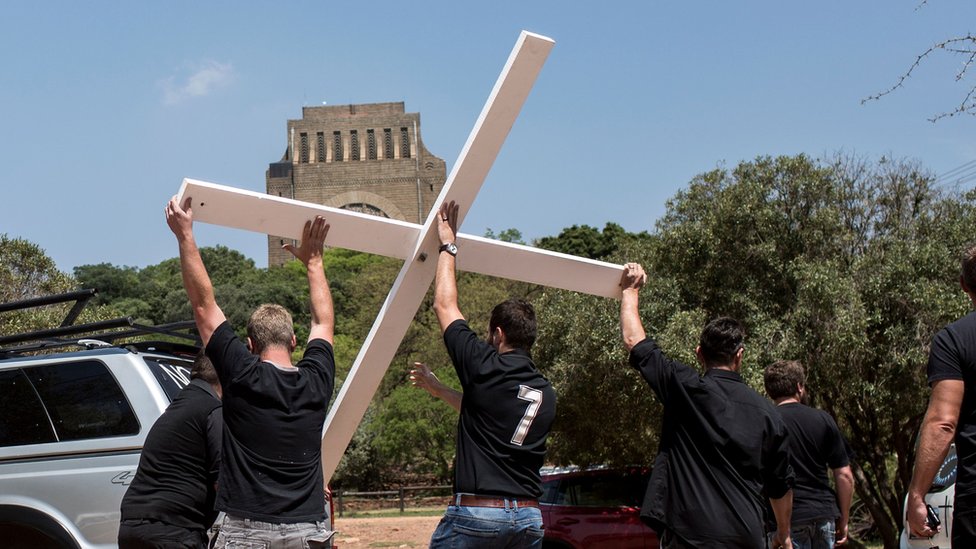