Many Egyptians on social media have adopted the slogan of an upcoming state-sponsored youth conference to air grievances about the way the country is run.

The World Youth Forum conference will be held in Sharm el-Sheikh from 4 November. Its promotional hashtag #WeNeedToTalk is intended to engage young people, attract world leaders and send a message of peace.

The Forum launched a video on social media on 21 October to promote the issue which has been viewed more than seven million times.

However, activists on Twitter and Facebook have used #WeNeedToTalk to contrast Egypt’s aim of freedom expression for youth with what they believe to be an ongoing crackdown on Egyptians’ rights and freedom.

Many of those criticising the government circulated pictures of security forces chasing or assaulting protesters. Others posted pictures of activists or detainees believed to have been detained by the police.

Activist Radwa Mehat has been posting a stream of messages about human rights and democracy on her Twitter feed, including: “We Need To Talk about Alaa Abdul Fattah, a pro-democracy activist, who has been in prison for three years.”

Some campaign groups, such as Truth For Giulio are using #WeNeedToTalk to highlight what they call victims of the Egyptian regime.

Journalist Mohamed Tarek posted a picture of Italian postgraduate Giulio Regeni who had been studying in Cairo when he disappeared on the anniversary of the country’s revolution on 25 January 2016. His tortured body was found nine days later.

New York-based rights organisation Human Rights Watch – whose activists were refused entry into Egypt in 2014 – has said there is a need in Egypt to talk about travel bans and asset freezes of activists.

There have been some sarcastic uses of the term. This cartoon shows a citizen in the guillotine, the release of the blade in his mouth, with an army officer telling him: “Please talk and express your opinion”

Another cartoon depicts a young person beginning a speech while a prisoner peeps out of a cage under his podium.

Using the intended purpose of #WeNeedToTalk, supporters of President Abdel Fattah Al-Sisi – who launched the first National youth conference in Sharm el-Sheikh in October 2016 – have been sending their messages of peace, prosperity and harmony.

For many in Cairo, the World Youth forum is something to look forward to.

One twitter user posted the hashtag to say President Al-Sisi has restored Egypt to its regional and international status. 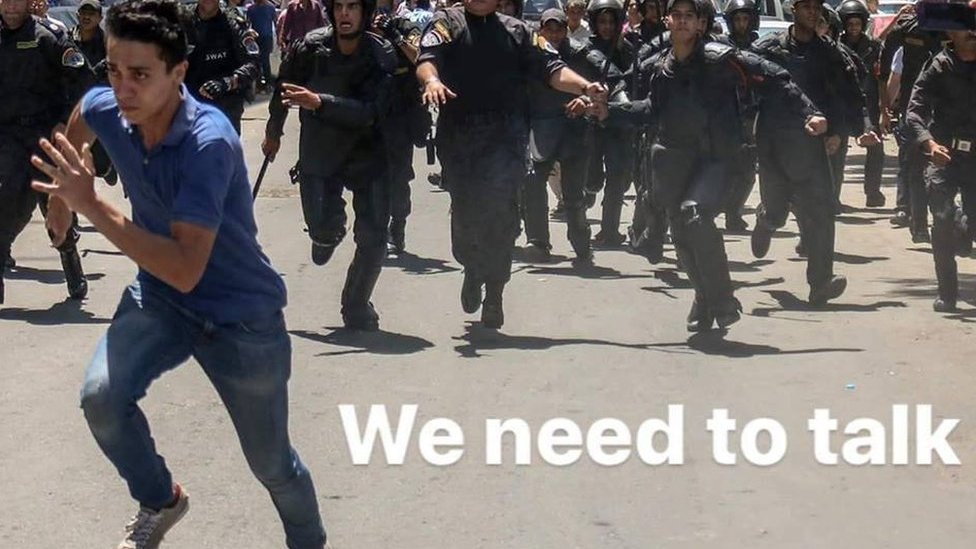