As more chefs start serving Nigerian food in expensive restaurants, Ijeoma Ndukwe asks if Nigerians will ever consider paying a lot of money for traditional dishes.

Smoke rises from a grill as slabs of beef and liver sizzle at an umbrella covered stall – the traditional dish called “suya” is being prepared to sell at a busy food market in Lagos.

Customers are served throughout the night – music blasts out of speakers while huge metal bowls filled with rice dishes, peppered snails, fish and meats are heated up on a low flame at each stall.

However, the food scene in Lagos is changing and increasingly more sophisticated and cosmopolitan spaces are being introduced to the Nigerian market, offering creative adaptations of local dishes.

Food bloggers Nosa Oyegun and Folayemi Agusto, who run Eat.Drink.Lagos – a candid review of the city’s restaurants, say that with an influx of players trained in the culinary arts and the emergence of “celebrity” chefs with cult followings, upscale fusion food is steadily rising in popularity.

“You have a lot of people that are taking Nigerian dishes that you’re familiar with and they’re flipping them on their head. People are being more adventurous with Nigerian food, which has always being a taboo thing,” says Mr Oyegun.

Ms Agusto adds that she has seen the food scene in Lagos flourish over the past two to three years.

“I think the internet is helping to spread the gospel of Nigerian food or the fact that people are doing different things with it. People are sharing what they create via blogs and social media. The world is just more connected.”

‘Sexy time to be a chef’

Chef Alex Oke believes the current “renaissance in cooking” in Nigeria is a step in the right direction for the industry.

Mr Oke grew up in Nigeria until his mid teens when he moved to the US, then UK and eventually Canada where he was taught at Vancouver’s Pacific Institute of Culinary Arts. He returned to Nigeria in 2015 when he realised that attitudes were changing.

“Looking at social media I saw it was kind of a sexy time to be a chef in Nigeria. Society in general started to respect chefs a lot more.”

He trained in French cuisine, but experiments with Nigerian dishes, fusing them with European and Asian influences to create what he calls “gentrified Nigerian food”.

His pop-up XO Boutique Bakery sees him adopting local ingredients to produce traditional European pastries, such as substituting almonds for cashews – a common nut in Nigeria – in his popular “almond” croissant.

Ozoz Sokoh is also a fan of this fusion philosophy. The hobbyist cook who consults and caters for food fairs and events is known as “Kitchen Butterfly” – the name of her prolific blog, which provides a platform for her imaginative interpretation of Nigerian recipes.

She speaks with relish about preparing the French upside-down pastry, tarte tatin, using typical Nigerian fruits such as the mango and African white star apple.

She has been known to wrap jollof rice in dry fish skin, adding flaked fish and herbs to make sushi.

She has also mashed the African purple pear into a dip similar to guacamole to eat with toast decorated with the flowers of waterleaf – a vegetable used in traditional soups.

But Ms Sokoh says not everyone is receptive to her culinary escapades.

“Someone once complained, ‘You’re taking thinking outside of the box too far,'” she laughs.

Yet she believes the search and exploration of identity is fuelling what she describes as a “revolution” in dining.

“There’s been a surge in everything ‘Nigeria’, not just cuisine in the past couple of years. It’s across literature, culture, history, experiences.”

Reni Folawiyo has also seen a shift in attitudes towards the consumption of Nigerian and African culture.

Ms Folawiyo describes one of the most popular dishes, which has been deconstructed and given the “Nok touch”. It is a braised oxtail and bean combination, which has been borrowed from the Yoruba culture, one of the country’s indigenous ethnic groups.

She recalls how initially not everyone was keen on this new way of dining.

“Some people were like, ‘Why is it not as we know it?’ But I think it’s changed. People understand what we’re trying to do now, that we’re not actually offering traditional food. We’re offering new African cuisine.”

Tiyan Alile, who founded the Culinary Academy in Lagos, believes education and young people have played a part in fuelling the production and consumption of refined Nigerian food.

Her restaurant Tarragon has integrated a blend of fundamental French and Nigerian techniques, with dishes such as steak with jollof risotto and braised goat knuckle alongside yam puree.

However, industry experts complain that Nigerians are notoriously resistant to change.

Businessman Chukwukaelo Ajuluchukwu says, “I like my egusi [ground melon seed] soup to taste like egusi soup. Some things are sacred.”

Saida Okadigbo, who runs a style website in Lagos, admits, “I wouldn’t go to a proper fancy restaurant to eat Nigerian food because I can have it in my house. I can have my cook make it the way I like.”

Although Nigerian food is well loved, it is not perceived as high-end by the general population, who associates fine dining with foreign fare.

Bayo Alabi, an engineer, says, “You can’t go to a Nigerian restaurant and feel that you’re having fine dining. I would wonder why I was paying so much for Nigerian food.”

And the cost of eating out at an upscale restaurant is prohibitively high for the majority.

This in a country where most recent figures show that more than 50% of the population lives on less than $2.00 a day.

Mr Oke is convinced that although niche, there is a big enough market with the disposable income to patronise these pioneering food businesses.

Also, with an expanding middle class, he believes the trend is set to have a bright future.

“We have a huge market here. These new creative [ventures] will find a share of the market. I think when we get richer as a society, people will be more willing to be guinea pigs for culinary experiments.” 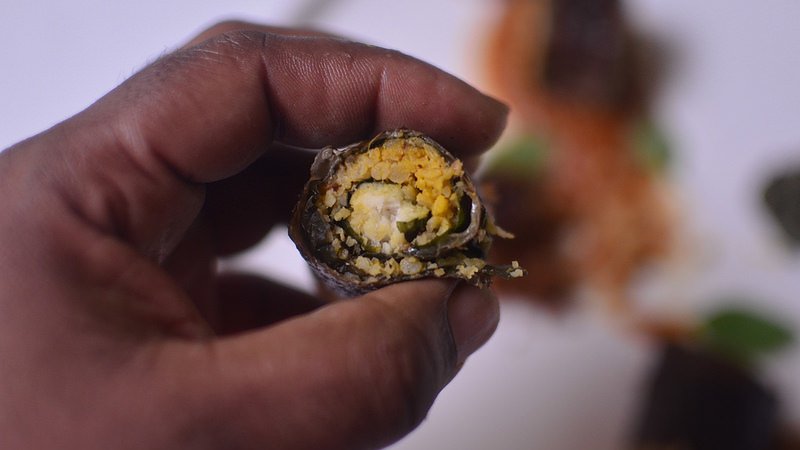