The duo are among more than 200 coaches who have applied for the job, said a Ugandan FA official.

“I have worked as an assistant coach for some time now and played a role in helping the team qualify for the 2017 Africa Cup of Nations,” Basena told BBC Sport.

The successful coach will be announced on 15 November.

Basena, who is also coach of Premier League side UPDF FC, has been in charge of Uganda since Serbian-born Milutin ‘Micho’ Sredojevic quit two months ago.

Basena was also in-charge when the Cranes beat Egypt for the first time in a competitive match, winning 1-0 at home in a 2018 World Cup qualifier in August, before falling by the same scoreline in Egypt a month later.

“I have what it takes to handle the national team because I have got a lot of experience now,” Basena explained.

Experienced tactician LeRoy, who guided Cameroon to the 1988 Africa Cup of Nations title, is aiming to lead a seventh team on the continent after previous spells with Senegal, Ghana, Congo, DR Congo and, most recently, Togo.

The Frenchman, who has reached the knock-out stage at six of the eight Nations Cups where he has managed, is still in charge of the Hawks, with two years left on his contract.

Portugal’s 34-year old Joao Miguel de Castro Ferreira, a coach with a UEFA coaching badge and who has worked in Portugal and Saudi Arabia, has also reportedly applied for the job.

The post fell vacant after Sredojevic terminated his contract over unpaid salary arrears.

Earlier this month, the Ugandan FA appointed former Zambia international and FA president Kalusha Bwalya, the 1988 African Footballer of the Year, as head of a five-man panel to selected the new coach. 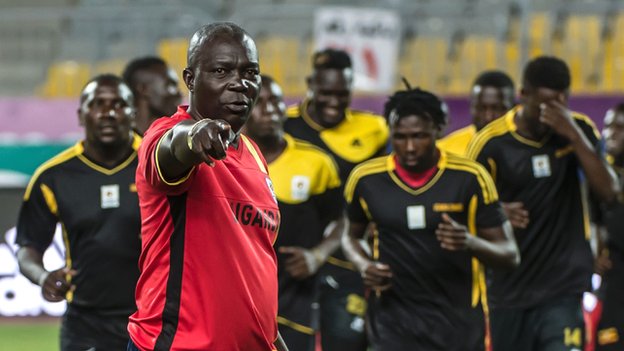