Everton teenager Beni Baningime says he has yet to decide whether to play for England or the Democratic Republic of Congo at international level.

The midfielder, 19, impressed on his first-team debut at Chelsea in the Carabao Cup last week before making his Premier League bow on Sunday.

“I haven’t thought about that yet really,” he told BBC Sport when asked which country he would represent.

“My dad and I will have to speak about it. We’re focussing on the club first.”

“Hopefully when we start winning – I need to get that bit done – then I will have to think about where I am going to go.”

Baningime was born in the Congolese capital Kinshasa but he has been at Everton’s academy since he was nine.

He was thrust into the spotlight at Stamford Bridge after Morgan Schneiderlin fell ill prior to kick-off, before caretaker coach David Unsworth turned to him again at half-time of Sunday’s 2-0 loss at the King Power Stadium.

“It’s just great that David Unsworth has given me the opportunity to play,” said Baningime, who played at the base of a midfield diamond against Leicester.

“He said ‘just do what you normally do with the ball’ and that gave me confidence. It was great. I would have wanted to win the game but that didn’t happen.”

Unsworth, who has regularly managed Baningime in Everton’s Under-23 side, was full of praise for the youngster after he showed his mettle in an energetic display for the Premier League strugglers.

“He is a top young player and for him to perform in a game and a half like he has done, in really difficult circumstances – he deserves a lot of credit.”

Baningime, meanwhile, has been revelling in his experiences of the last week.

“I have grown up watching Wayne Rooney and always loved him, (Cesc) Fabregas is a World Cup winner – it’s unbelievable to be on the same pitch as these guys,” he explained.

Baningime only made his debut for Everton’s Under-23 side last season, a year when they won their league, following his promotion from the Under-18 team.

Having signed a new deal this month that will keep him at Everton until 2020 this week, he is among a growing list of young talent that has broken into the Everton first team in recent times.

He said these players – such as Tom Davies, Jonjoe Kenny and Dominic Calvert-Lewin – and other Africans at the club have served as an inspiration.

“I look to up to Idrissa Gana Gueye. He’s someone I like to play like, and I love how he plays,” said Baningime of the Senegal international.

“It gives you inspiration that one day you can be just like them.” 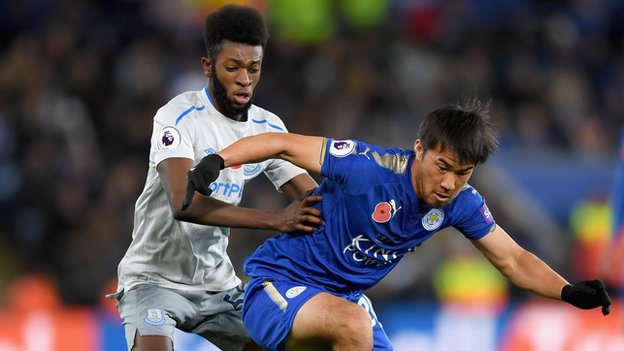