Medhane Yehdego Mered upon his arrival at Ciampino’s airport, on the outskirts of Rome, June 7, 2016. CVOA)

London, Oct. 29, 2017 (AltAfrika)-Italian prosecutors will not accept as evidence a DNA test that could exonerate an Eritrean man accused of smuggling thousands of Africans to Italy.

It’s the latest setback for Medhane Tesfamariam Berhe, whose trial has continued for more than a year, despite mounting evidence that Italian authorities are prosecuting the wrong person.

Berhe’s lawyer, Michele Calantropo, argued during a 45-minute hearing Wednesday that his client is the victim of mistaken identity in a case that has gained worldwide attention.

Calantropo contends that the actual person suspected of trafficking migrants shares Berhe’s first name. He believes Berhe was wrongfully identified in 2016 when he was arrested in Sudan and extradited to Italy. Soon after the extradition, doubts emerged about the identity of the person Italian and British authorities had captured.

Prosecutors released photos of a man who looked nothing like the person they had taken into custody. Instead, the person in the photos resembled Medhane Yehdego Mered, whom many believe to be the real trafficker.

The Italian investigators prosecuting the case would not accept the new DNA test as evidence in Berhe’s trial, blocking its admission. In Italy, both the prosecution and defense must agree to admit evidence that emerges outside of an investigation.

“We are basing our legal proceedings on other data, not on DNA,” Prosecutor Annamaria Picozzi said in court this week, according to The Guardian.

Lead prosecutor Calogero Ferrara did not respond to VOA’s email or phone requests for an interview. 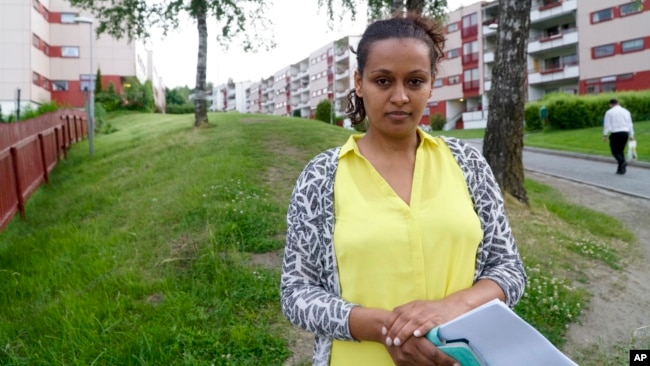 Hiwet Tesfamariam Berhe holds photocopies of documents she told the Associated Press belong to her brother Medhane Tesfamariam Berhe, in Oslo, June 9, 2016. Berhe said that her brother was misidentified as Medhane Yehdego Mered, an Eritrean man accused of trafficking thousands of Africans to Italy.

The sister of the man being held in custody, Hiwet Tesfamariam Berhe, believes this is a miscarriage of justice.

“I don’t understand it. In a country where there is democracy, where there is justice, they violated my brother’s rights. And they kept him for more than a year for something he has no knowledge of and to say that we have human rights, puffing out their chest and claim that there is human rights? I don’t know where human rights are,” she told VOA by telephone from Norway, speaking in Tigrigna.

The next hearing is scheduled for Nov. 9, a year and a half after authorities extradited Berhe. Despite failing to produce evidence linking Berhe to the crimes he is accused of committing, prosecutors show no signs of giving up the case.

“Instead of playing with one poor, innocent kid’s life and time, why don’t they really find the people who are really committing these things. They are using us as a way to buy time because they know the truth,” Berhe’s sister said. (VOA)

Artisans in Mali are revaving Bogolan, a ...