Brazil beat Mali to take third at U17 World Cup

Brazil beat Mali 2-0 in Kolkata on Saturday to finish in third place at the Fifa Under-17 World Cup.

Two second half goals, from Alan and Yuri Alberto, were enough for the Brazilians to see off the African side.

The final was scheduled to follow the third place play-off match, with England facing Spain for the trophy. in the same stadium in Kolkata.

This is the second time Brazil have taken third place at the Under-17 World Cup.

The Africans held their own in the first half and had the better of the chances but went into the break at 0-0.

In the second half, Brazil were gifted their opener as Mali goalkeeper Youssouf Koita failed to stop a soft strike from Alan in the 55th minute. 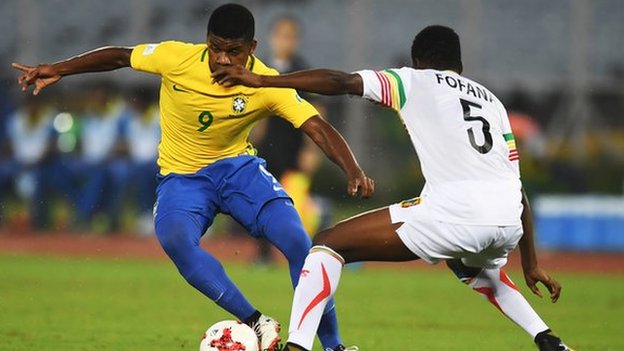