West Ham manager Slaven Bilic says Andre Ayew is a “game changer” who can help the struggling Premier League side rise up the table.

Bilic said the Ghanaian’s performance in West Ham’s Carabao Cup win against Tottenham on Wednesday is exactly why he sanctioned a big money move to bring him to the London club.

“It’s me who wanted Andre to join us from Swansea,” Bilic told BBC Sport.

“I rate Andre very highly. He’s a great player. He was the game changer.”

Ayew inspired West Ham to an unlikely win against Tottenham in the Carabao Cup, scoring two quick-fire goals that sparked West Ham’s revival in a 3-2 win.

The West Ham boss is hoping Ayew can add to his two league goals this season when the Hammers travel to Crystal Palace on Saturday.

“He’s got that (knack) for goals,” said Bilic. “He’s always in a good position at the right time.”

Ayew joined West Ham in August 2016 for around £20m after scoring 15 goals in his debut Premier League season with Swansea City.

The Croatian now wants his form to continue as his side seek to rise up the Premier League following a poor start.

After nine games, West Ham lie 16th in the table and are only out of the relegation zone thanks to their goal difference.

“I told him I want him to continue like this – not only scoring, but his game overall. It’s a big boost and I hope it’s going to continue,” said Bilic.

Just like his manager, Ayew has been under a lot of pressure to perform with West Ham fans criticising his recent performances.

He also recently lost his place in Ghana’s national team, overlooked for the last World Cup qualifier against Uganda.

Bilic, however, is tipping him to regain his form for both club and country.

“Players are always questioned, especially big ones like Andre,” said the Croatian.

“For young people, it’s not easy to be under that kind of pressure but he’s very strong in his head. He’s very mature.

“He’s been around for a long time in different countries, and also with Ghana. I haven’t been to Ghana but I can imagine how big the pressure he is under when he’s there for World Cup or Africa Cup of Nations qualifiers.”

Ghana, who can no longer qualify for Russia 2018, play their final qualifier at home to Egypt next month. 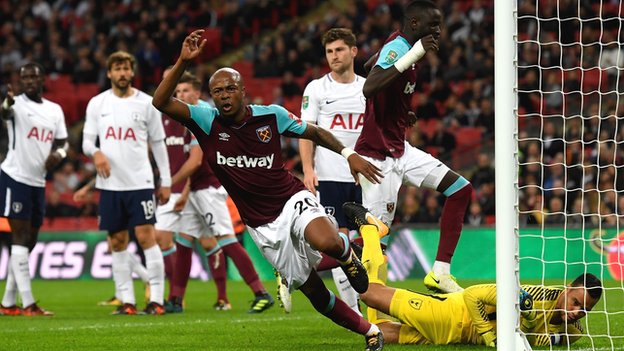