On Saturday, Al Ahly play Moroccans Wydad Casablanca in Alexandria in the first leg of the final.

“We aim to win whatever competition we enter,” he stressed. “Our supporters are desperate for another Champions League title.”

The Cairo giants have won eight African crowns, the last of which came in 2013.

El Badry, who is enjoying a third spell in charge of the club, guided Al Ahly to the 2012 Champions League title.

Saturday marks the third meeting between Al Ahly and Wydad this campaign after each beat the other 2-0 at home during the group phase.

Yet the manner in which Ahly eliminated Tunisians Etoile du Sahel in the semi-finals means they carry the tag of favourites ahead of the final.

On Sunday, Ahly thumped Etoile 6-2 at home in the semi-final second leg, with Moroccan Walid Azaro scoring a hat-trick, to cruise through to their first final in four years.

While Ahly will be contesting their eleventh Champions League final, Wydad are in the decider for only the third time in their history.

They defeated Al Hilal of Sudan in 1992 but fell to Tunisia’s Esperance six seasons ago in a home-and-away final decided by a solitary goal.

Yet the Moroccans are buoyed by knowing that the second leg on 4 November is at home, where coach Hussein Amotta’s side have been outstanding this year.

They have won all six of their Champions League games in Morocco, while conceding just one goal.

One of those wins came when beating Algerians USM Alger 3-1 on Saturday to reach this year’s final by the same aggregate scoreline.

Wydad they have been much less impressive on the road however, losing four out of six games, even if Al Ahly are the only side to have scored more than once against the Moroccans’ well-organised defence in that time.

Whoever wins this year’s final will claim $2.5m in prize money and represented Africa in December’s Fifa Club World Cup final in the United Arab Emirates. 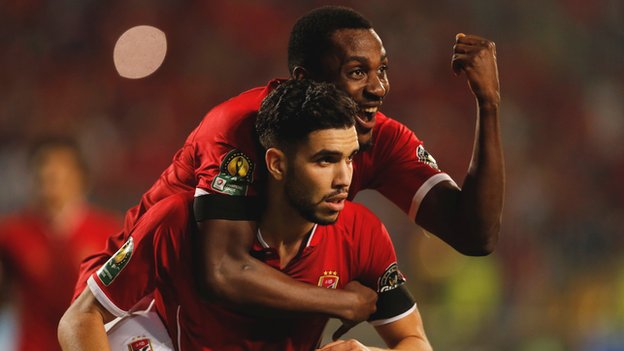