Today, 26 October, marks the third anniversary of the death of South Africa international Senzo Meyiwa, who was gunned down at the home of his girlfriend, singer and actress Kelly Khumalo. No arrests have been made, as the BBC’s Mohammed Allie reports:

It is truly hard to believe that in the three years since the murder of the former Bafana Bafana goalkeeper Meyiwa, his killers have yet to be found.

Most worryingly of all for Meyiwa’s family and his legions of fans, both from inside and outside his club Orlando Pirates, crime experts have described the murder in Vosloorus, just south-east of Johannesburg, as a ‘cold case’.

This situation arises when an investigation yields no results because of a lack of sufficient evidence.

The South African FA (Safa) has expressed its frustration with the impasse, appealing to police to both speed up – and put more resources – into the investigation.

On Thursday, Safa CEO Dennis Mumble was quoted by the Sowetan newspaper as saying that police have kept the organisation in the dark with regards to the investigation and that they are still waiting for answers.

Local soccer fans are similarly frustrated, widely expressing their outrage on social media at the lack of progress with finding the killer.

The 27-year-old was shot while reportedly trying to protect musician Khumalo from burglars in Vosloorus, a working-class township where people often commute into Johannesburg for work.

Shortly after his death, South African police said two men had entered Khumalo’s house at around 8pm local time, demanding mobiles phones and valuables, while a third man remained outside.

Meyiwa’s burial in his hometown of Durban was attended by thousands of people, while South African President Jacob Zuma ordered the national flag to be flown at half-mast to honour the goalkeeper.

Amid the recent gloom, police have tried to keep some hopes alive of finding the perpetrators, saying they have DNA evidence and the firearm cartridge from the scene that links them to certain suspects.

But if that is the case, why has no arrest yet been made?

The initial excitement generated by the arrest of a suspect shortly after the murder quickly turned into a damp squib when he was released due to a lack of evidence.

According to experts, investigators generally have a 48-hour window in which to develop their leads. After that, every hour that goes by without leads generated or suspects being arrested makes solving the crime increasingly unlikely.

Yet surely the fact that five people, including Khumalo and two of Meyiwa’s friends, were in the house at the time of the killing should at least have provided some strong leads.

As it is, police – who offered a reward for information about the killer shortly after Meyiwa’s death – have interrogated at least 30 people and taken over 100 statements in the case, yet there’s been no progress.

Who was Senzo Meyiwa?

The ‘curse’ of Meyiwa’s father, Sam, seems to have materialised – as he claimed that Orlando Pirates would continue to struggle until they helped the family find closure on his son’s senseless killing.

Meyiwa Snr believes it’s no coincidence Pirates have won no trophies over the past two seasons while they finished outside the top eight in 2016-17 for the first time since the Premier Soccer League’s creation in 1996.

He feels that Pirates, through their influential owner and chairman Irvin Khoza, have the power to put pressure on the police to prioritise the investigation.

After all, Meyiwa was a much-loved former captain of the team and a key component of their success.

The promises of Fikile Mbalula, soon after his appointment as Minister of Safety and Security in March, have also not materialised.

With characteristic bluster, Mbalula trumpeted that cracking the case is one of his priorities and that he would make arrests very soon.

Several months later – and three years to the day – there’s still been scant sign of progress. 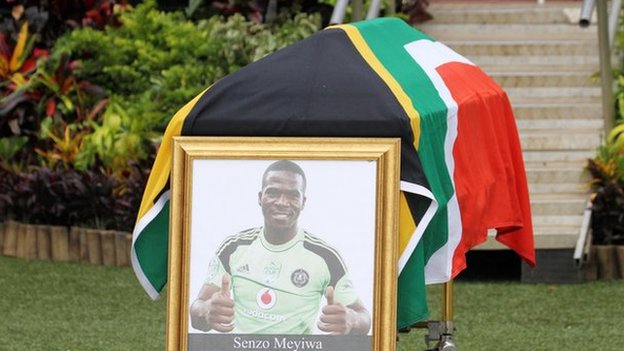