West Ham manager Slaven Bilic said his side “reacted in the most brilliant way” after coming from two goals down at half-time to beat London rivals Tottenham and reach the Carabao Cup quarter-finals.

Bilic has been under pressure following their Premier League drubbing by Brighton at London Stadium on Friday, but was enthused by the reaction to their abject first-half showing against Spurs.

Striker Andre Ayew netted twice from close range and Angelo Ogbonna nodded in the third from a corner to complete a stunning turnaround.

They had got off to the worst possible start at Wembley, conceding after just five minutes as a high defensive line was exploited by Son Heung-min’s pass through to Moussa Sissoko to stroke home.

Dele Alli had a close-range header tipped away by goalkeeper Adrian, but the Tottenham midfielder curled in a deflected second before half-time from the edge of the box following neat build-up play by Son.

Bilic said: “To score three goals against them – who do not concede goals – then be brave and compact and good on the ball, we deserved it and it is a big boost for us.

“The mood was down at half-time, but not as down as against Brighton. That result was bad but we played good football. We did not penetrate Spurs enough, were not good in the final third and we said things about what we should do when they and ourselves have the ball.

“I am calm and glad when we win in this way. You see the team is very alive and we are very stubborn in a positive way.

“There is no time and place to go large now. We have done a lot, but considering the season, we have done nothing.”

Spurs, who rested top scorer Harry Kane and skipper Hugo Lloris, could have taken the tie to extra time, but Alli’s thumping volley and Sissoko’s curled effort were both kept out by Adrian.

The draw for the next round takes place live on Twitter at 16:00 BST on Thursday.

After the departures of Frank de Boer, Craig Shakespeare and Ronald Koeman from Crystal Palace, Leicester and Everton this season, Croat Bilic was being tipped to become the next managerial casualty of the season.

West Ham seemed down and out at half-time having barely caused Spurs any problems and it looked to be piling the pressure on the 49-year-old.

His side are 16th in the Premier League, hovering above the relegation zone only on goal difference after winning just two of their opening nine games.

But the players showed their fight and togetherness to progress in the competition, heartily embracing each other on the pitch at full-time before throwing their shirts to the jubilant travelling support.

Skipper Mark Noble returned to the side and reportedly led a meeting with the players at the club’s training ground on Monday, discussing the poor start to the season.

“We have not been doing ourselves justice, but I said during the week we have to wear the shirt with pride and we did that,” the Englishman said after Wednesday’s win, which may now provide a platform to build on, starting with Saturday’s vital league game against bottom side Palace.

Bilic added: “The team, especially in these moments, is above every individual and we have to be humble. No matter who plays on Saturday, we should not have long noses and we have to fight for the team.”

It was the Argentine’s whipped corner into the box which completed the recovery as Ogbonna rose highest to flick in towards the far post.

Spurs thumped Liverpool 4-1 on Sunday and manager Mauricio Pochettino said after the game that the national stadium was starting to “feel like home” but the Argentine will be surely alarmed by his side’s second-half collapse.

Tottenham’s eye-catching, swift style of play was showcased again in a comfortable first half, but they fell apart once West Ham came at them in the second period.

This competition provided a chance for Pochettino to win a first trophy as a manager – having failed to at Espanyol and Southampton – and for Spurs to reach a ‘home’ cup final at Wembley.

The 2008 League Cup triumph remains the last time Tottenham lifted a major trophy – but they have mounted Premier League title challenges in the past two seasons and face a potentially crucial league trip to Manchester United on Saturday.

Pochettino said: “We scored two goals and it looked like the game was over but we showed a lack of aggression and concede three in 15 minutes. That can’t happen.

“When you are not on the same mental level it is difficult. The opponent had nothing to lose, they started to believe and we started to suffer. Maybe we thought the job was done. The second half was not the same and it is difficult to accept.

“After Real Madrid and Liverpool it was difficult to keep the motivation and concentration. We must be more mature at 2-0 up, that is disappointing. It is not good to lose, always. I am not happy.” 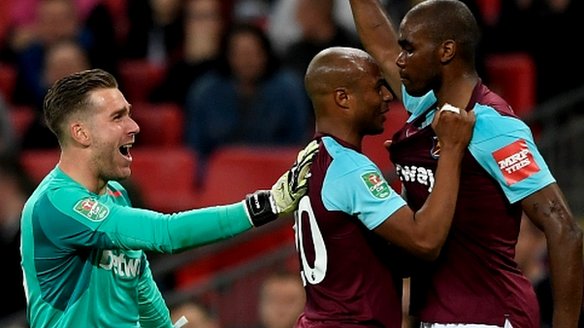