What next for Kenya?

Kenyan opposition leader Raila Odinga has asked his supporters not to interfere with the repeat presidential election but he has called for a resistance movement against the government. What does this mean, asks the BBC’s Dickens Olewe.

“We won the battle for multiparty democracy… we are going to win the battle for a free and fair election,” veteran opposition leader Raila Odinga said in his statement on 10 October, as he announced that he was withdrawing from the re-run.

Looking back at his comments, he seemed to have deliberately chosen his words to draw a clear link to his well documented fight for multi-party democracy in Kenya.

It was as if he was reminding Kenyans: “I’m Raila Odinga, the reformer, and this is my next mission.”

Even though he was not going to take part in the race, he wanted Kenyans to know that he had won the moral argument.

“Our opponents want an election for the sake of it, we want a better election,” he said.

He said that the electoral commission had failed to make the changes needed to prevent a repeat of the mistakes that marred the August poll.

President Uhuru Kenyatta disagreed, saying the commission was independent and should not be coerced to make partisan changes.

Mr Odinga’s call to his supporters to stay away from polling stations effectively reduces the political temperatures that were building up in anticipation of violent clashes with security authorities on election day.

It was not the “major announcement” that he had been promising for days that he would give on the eve of the “sham” election.

Along with other opposition leaders, they read a lengthy statement in English, clearly targeting the international audience.

They blamed the government for the killing of their supporters, intimidation of judges and electoral officials and also accused it of instituting a “dictatorship”.

The speech was meant to come up with a political narrative that would give his supporters assurance that the whole campaign had not been in vain.

The 72-year-old leader has essentially, once again, remodelled himself and his message. He now sees himself as leading a resistance movement against what he calls creeping authoritarianism.

Indeed some supporters of President Kenyatta have been calling on him to be a “benevolent dictator” and Mr Odinga has now made the case that he is the person to stop this tide.

The two leaders have rejected calls for them to meet and resolve what many see as a political problem.

Thursday’s election will therefore not end but escalate the political battle between the Odinga and Kenyatta families, which has been going on since the country became independent.

Mr Odinga also told supporters that “if there is no justice for the people, let there be no peace for the government”.

He called for boycotts of good and services linked to businesses which the opposition deems as close to the governing Jubilee Party.

His call is however dangerous because people are already being discriminated against because of their ethnicity and such a call could result in counter-measures which would hurt his supporters.

It is a campaign that makes everyone vulnerable. There are no winners.

With Kenya going through an intensified political environment for months, many will welcome a seeming return to normalcy once the election is over.

It is difficult to see how Mr Odinga will maintain an engaged and captive public for his push to have new elections in 90 days.

But then, he has been written off before only to confound his detractors.

However, many Kenyans will be looking up to President Uhuru Kenyatta to lead the healing and reconciliation of the country.

As Kenyans ponder what comes next for the country, they have to deal with the seeming moral collapse of one institution – the Supreme Court.

The failure of the court to convene on Wednesday to listen to the petition calling for the postponement of the election will be seen by some as a dereliction of duty and a betrayal.

Where were the judges?

Judges who dissented, saying results should be respected

The overriding issue was not necessarily how the court would rule but that it provided judicial audience and leadership for a matter that only it could adjudicate.

The Chief Justice David Maraga said after the Supreme Court annulled the August election that, “the greatness of any nation lies in its fidelity to the constitution and adherence to the rule of law and above all respect to God”.

The question after the months of heightened political tension in Kenya is whether there is enough fabric from which it can emerge as a nation and whether going forward it will be guided by the rule of law. 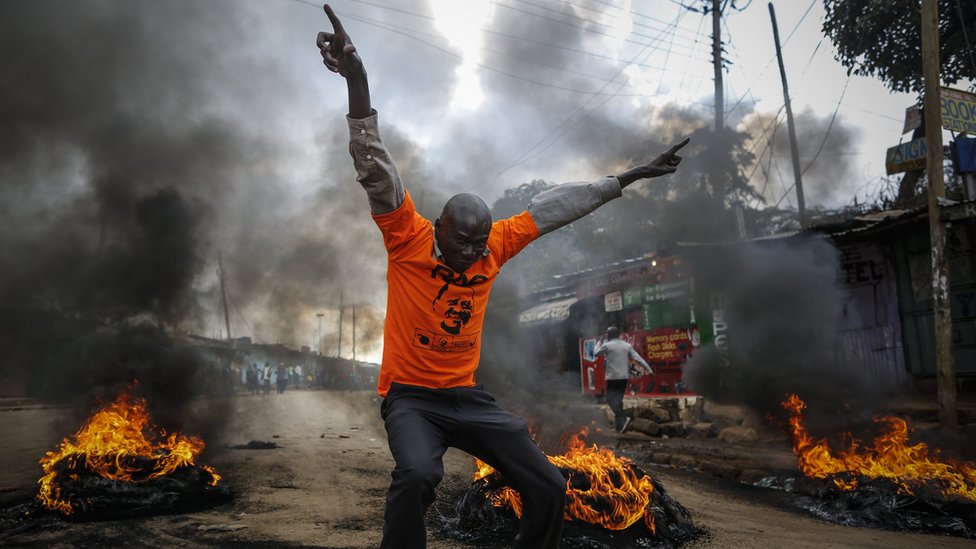