Togolese striker Francis Kone has been honoured by Fifa for his life-saving actions in a Czech league match.

He was given a Fair Play award at the Fifa “Best” ceremony in London on Monday night.

Kone saved the life of goalkeeper Martin Berkovec back in February, after he nearly swallowed his tongue following a collision.

Slovacko’s Kone acted after Berkovec had clashed with his Bohemians 1905 team-mate Daniel Krch.

He used his fingers to move Berkovec’s tongue and stop him suffocating, after the player had been knocked out.

Berkovec later wrote on Facebook: “I would like to thank Francis Kone for rescue and emergency… I’m glad for the relief and thanks again!!!”

“I can’t stand there, watching someone suffocate, without doing something,” Kone told Fifa.com.

He said he had been involved in three similar situations before.

Kone was born in Ivory Coast but qualifies for Togo through family ties.

He was the sole African winner on the night – Oscarine Masuluke of Baroka FC in South Africa missed out on the Puskas award for goal of the year, as voted for by the public, to Arsenal’s Olivier Giroud. 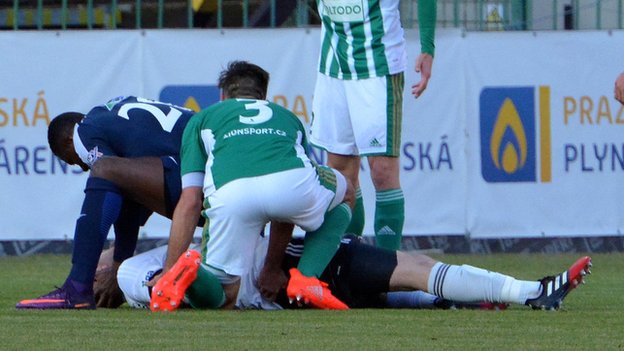