The latest controversy involving Donald Trump centres on the way he extended his condolences to the widow of a soldier killed in Niger.

Myeshia Johnson accused the US president of struggling to remember her husband’s name. Mr Trump denies this.

Sgt La David Johnson was one of four US soldiers killed in Niger earlier this month. Here is what we know about their deaths.

A joint patrol between US and Niger troops came under machine-gun and rocket fire on 4 October near Tongo Tongo in south-western Niger.

According to the Chairman of the Joint Chiefs of Staff, Gen Joseph Dunford, the soldiers did not seek additional help until an hour after the attack began.

The French airlifted the injured to the capital city Niamey, before they were eventually flown to Germany for treatment and later home to the US. The bodies of those killed were taken away by a private contractor.

Why did the US soldiers struggle to fight off their attackers?

While on the ground on such assignments, US personnel are usually equipped to fight back if attacked but they are not in Niger primarily to carry out offensive missions.

It is highly unlikely that these troops were on a high-risk mission – otherwise they would have had a stronger deployment. Gen Dunford says the troops did not expect resistance on this patrol, as is the basis for joint patrols with local military forces.

As a result they were only equipped with rifles and other small arms.

During the fighting, he was separated from his colleagues. French, Nigerien and US forces remained in the area until Sgt Johnson’s body was found two days later.

Who carried out the attack?

So far, no group has claimed it. The area is near the border with Mali. Different extremist groups – including some linked to al-Qaeda, as well as the so-called Islamic State – operate on both sides of the border. Many of the attacks carried out here are not claimed by any group.

Some local and regional media say the regional wing of IS, led by Abu Walid al-Sahrawi, is responsible. But unusually, there has been no chatter about it on IS-linked social media accounts.

Jihadist groups often boast when they kill soldiers, so to have Westerners, and Americans in particular as their victims, would be considered a huge feat.

Videos from jihadi groups sometimes feature videos of captured soldiers or corpses of those killed. There has been no such acknowledgement so far and it does not appear as if the attackers found Sgt Johnson’s body.

The attack happened a long way away from areas where Boko Haram militants are usually found, which is towards the south-east of Niger around Lake Chad.

What is the US doing in Niger?

The US has 800 military personnel in Niger to support and train the local forces to improve counterterrorism efforts (and the US supports several other African countries in a similar manner). Last Thursday, Director of Joint Staff Lt-Gen Kenneth McKenzie insisted US troops were not taking part in or advising in Niger’s direct combat missions.

Some of the Americans are also involved in the construction of an air facility in the town of Agadez for transport and surveillance operations across the Sahel region. The plan is to share the intelligence gathered with the local partners, including Niger.

Is there a cover-up about the US presence in Niger?

That is what some American politicians and media are suggesting but back in June, in a letter to Congress, President Trump, indicated that there were 625 US troops in Niger at the time, conducting counterterrorism operations.

Have other US servicemen been killed in the region recently?

This is the first time American soldiers have been killed in combat in Niger.

With the increasing number of US military personnel getting involved in missions in Africa, it would not be far-fetched to suggest there will be other cases in the future.

In May, a navy seal was killed in Somalia while accompanying local forces on a raid on Al Shabab militants.

What are the unanswered questions?

It is still unclear what the circumstances surrounding the attack were. US Africa Command (Africom) says it is investigating the case to establish the details of what led to the incident, what happened during the fighting and the aftermath, including how Sgt Johnson got separated from his colleagues, whether the forces conducting the evacuation conducted a headcount, and why it took so long to find Sgt Johnson’s body.

While the Americans insist the convoy was not on a special mission, including pursuing any high-value targets, some media reports quote Nigerien military officials as saying the troops had been responding to an attack on a nearby village by an armed group.

These reports raise questions about whether the locals had been sympathetic to or even collaborating with the attackers, to allow the soldiers to be lured into the ambush. It is also unclear whether the US forces had enough intelligence on the threat they faced. 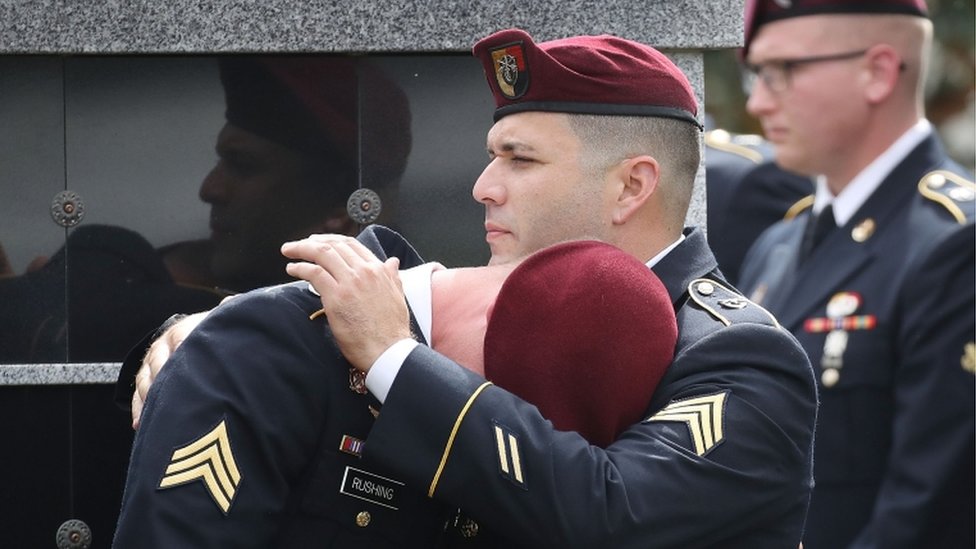