Mali are through to the semi-finals of the Under-17 World Cup in India after a 2-1 victory over Ghana in Saturday’s quarter-final.

The Eaglets dominated the game which was overshadowed by difficult, wet conditions in Guwahati amidst heavy rain.

The Malians were rewarded for their bright start with a 15th minute goal from Hadji Drame.

In the second half, Djemoussa Traore doubled Mali’s lead.

As the rain continued to lash down, the players found it increasingly difficult to negotiate the pitch.

Despite the conditions, Ghana pulled a goal back in the 70th minute as Kudus Mohammed converted a penalty.

The Black Starlets tried hard to find an equaliser but Mali held on to secure the victory.

Mali, who reached the final of the Under-17 World Cup in Chile in 2015, will play either Iran or Spain in the semi-final in Mumbai on Wednesday. 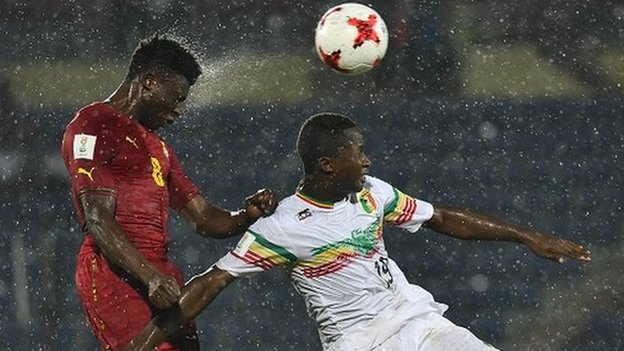