London, Oct. 20, 2017 (AltAfrika)-Nearly one in three Oxford colleges failed to admit a single black British A-level student in 2015, with the university accused of “social apartheid” over its admissions policies by the former education minister David Lammy.

Similar data released by Cambridge revealed that six colleges there failed to admit any black British A-level students in the same year.

Seven years has changed nothing at Oxbridge. In fact, diversity is even worse

Lammy first requested the ethnicity data from Oxford and Cambridge in 2016. While Cambridge provided it immediately, Oxford finally released it on Thursday after it was informed that the Guardian was preparing a story.

Lammy said the figures showed that many colleges at both Oxford and Cambridge failed to reflect the UK’s population, and called into question the universities’ claims to national standing.

“This is social apartheid and it is utterly unrepresentative of life in modern Britain,” Lammy said.

The figures are the first to update the embarrassing data published in 2010 – after freedom of information requests by Lammy – that revealed Merton College, Oxford had not offered a single place to a black British student for five years. 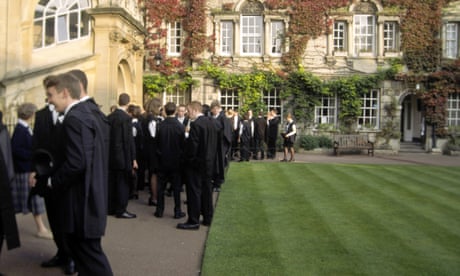 While the new data represents an improvement from before 2009 – when 21 Oxbridge colleges offered no places to black students, compared to 16 in 2015 – the figures suggest that elite colleges still struggle to recruit black British school pupils, especially from state schools.

A handful of black British students – an average of 3.5 each year between 2010 and 2015 – who do not have A-levels gain places at Oxford. In most cases they come from independent schools that enter their pupils for alternative exams such as the international baccalaureate.

The new figures also show that some parts of the country – especially disadvantaged regions of Wales and the north-west of England – have largely missed out on efforts by the two universities to widen their admissions base and admit students from outside the south of England.

Only three Oxford colleges and six Cambridge colleges made at least one offer of an undergraduate place to a black British A-level student in each of the six years between 2010 and 2015.

Oriel College, Oxford, made just one offer to a black British A-level student in the same period. Data released by Oxford after the Guardian’s inquiries showed three further black students with other qualifications were offered places at Oriel.

“Difficult questions have to be asked, including whether there is systematic bias inherent in the Oxbridge admissions process that is working against talented young people from ethnic minority backgrounds,” said Lammy, the Labour MP for Tottenham and the first black Briton to attend Harvard Law School.

Lammy noted that “there are almost 400 black students getting three As at A-level or better every year,” yet few of them are attracted to apply to Oxford or Cambridge. Around 3% of the British population identified as black in the last UK census.

In response, a spokesperson for Oxford said rectifying the probem would be “a long journey that requires huge, joined-up effort across society – including from leading universities like Oxford – to address serious inequalities”.

Oxford said students from black and minority ethnic backgrounds made up 15.9% of its 2016 UK undergraduate intake, up from 14.5% in 2015 and double those in 2010. Those figures include British Asian students and other minorities. 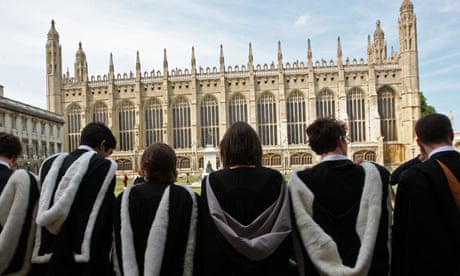 “We’re also working with organisations such as Target Oxbridge and the newly formed Oxford black alumni network, to show talented young black people that they can fit in and thrive at a university like Oxford. All of this shows real progress and is something we want to improve on further,” the spokesperson said.

A spokesperson for Cambridge said that its admissions decisions were made on academic considerations alone, while spending £5m a year on access measures including work with black and minority ethnic school pupils.

“The greatest barrier to participation at selective universities for students from disadvantaged backgrounds is low attainment at school. We assess the achievements of these students in their full context to ensure that students with great academic potential are identified,” the spokesperson said.

“Widening participation further will require government, schools, universities, charities, parents and students to work closely together. We will continue to work hard with all parties to raise aspirations and attainment to improve access to higher education.”

The data emerged after a long-running tussle between Lammy and Oxford, with Oxford refusing to publish detailed breakdowns of its admissions decisions by ethnic group despite repeated requests, including a direct approach by Lammy to Oxford’s vice-chancellor.

Lammy’s initial request for the ethnicity data last year was refused by Oxford, despite Cambridge supplying the breakdown of offers and applications and Oxford itself having produced the same data in 2010.

The former education minister – who has campaigned for years over widening access to top universities – remained unhappy that Oxford refused to release detailed figures showing offers to British students of Caribbean and African descent. The earlier data obtained by Lammy showed that only one black Briton of Caribbean descent had been accepted as an undergraduate at Oxford in 2009.

“I have been pressuring the University of Oxford to publish this data for over a year and they have only begrudgingly decided to partially publish it now,” Lammy said, calling the university’s decision “defensive” and “evasive”.

“While I am pleased that Oxford has backed down to avoid further embarrassment, I am disappointed that the university has combined all black people together into one group – why should they be the only institution that doesn’t break down data properly when you need granularity to understand different ethnic groups?”

Oxford responded that it had offered to publish the limited data – aggregating black students into a single category – last year. “We made an offer to Mr Lammy in September 2016 to provide data about offers made to black and white candidates by college in each year. To break the information down further would allow the specific ethnic background of some individual students to be identified,” the university said.

“This is not information the Data Protection Act allows us to disclose without the consent of the student.

UK has one of the worst pollution ...

Somalia among worst for pollution deaths