She spoke out in a New York Times article, saying she was lured to his room under false pretences.

He then said that he wanted to give her a massage, she claimed, saying she initially thought he was joking.

Weinstein faces allegations of sexual misconduct and assault from dozens of women. He has “unequivocally” denied having “non-consensual sex”.

Nyong’o, who won a best supporting actress Oscar for 12 Years a Slave, was a drama student at the time of the alleged incident.

She said she had been invited to his family home in Connecticut, apparently to watch a film, shortly after they first met in 2011.

He then insisted that she leave the screening room with him, she claimed.

Nyong’o, 34, wrote: “Harvey led me into a bedroom – his bedroom – and announced that he wanted to give me a massage.

“I thought he was joking at first. He was not. For the first time since I met him, I felt unsafe.

“I panicked a little and thought quickly to offer to give him one instead: it would allow me to be in control physically, to know exactly where his hands were at all times.”

She said she was trying to keep a “semblance of professionalism” in the “bizarre” circumstances, as she had studied body work and massage while at Yale.

She added that she was trying to “buy time”, to “figure out how to extricate” herself from the situation.

“Before long he said he wanted to take off his pants,” Nyong’o continued. “I told him not to do that and informed him that it would make me extremely uncomfortable.

“He got up anyway to do so and I headed for the door, saying that I was not at all comfortable with that.”

She said on another occasion, she attended a screening with Weinstein and expected there to be a group of people for dinner.

Yet she said it was only herself and Weinstein, who suggested they continue their meal in a private room.

She refused and said that when she asked Harvey if they were “good”, he allegedly said: “I don’t know about your career, but you’ll be fine.”

“It felt like both a threat and a reassurance at the same time,” she wrote.

When she met Weinstein again at the premiere of 12 Years a Slave, Weinstein told her he had treated her badly in the past and was “ashamed of his actions”, she continued.

She said she thanked him but vowed to never work with the producer.

Nyong’o wrote: “I share all of this now because I know now what I did not know then. I was part of a growing community of women who were secretly dealing with harassment by Harvey Weinstein.

“There is clearly power in numbers. I thank the women who have spoken up and given me the strength to revisit this unfortunate moment in my past.”

Meanwhile, a group of Weinstein Company employees have written an open letter asking their employer to release them from the NDAs (non-disclosure agreements) that bar them from speaking publicly about what they have experienced and witnessed.

“We ask that the company let us out of our NDAs immediately… so we may speak openly, and get to the origins of what happened here, and how,” they wrote in a letter signed by “Select Members of The Weinstein Company Staff”. 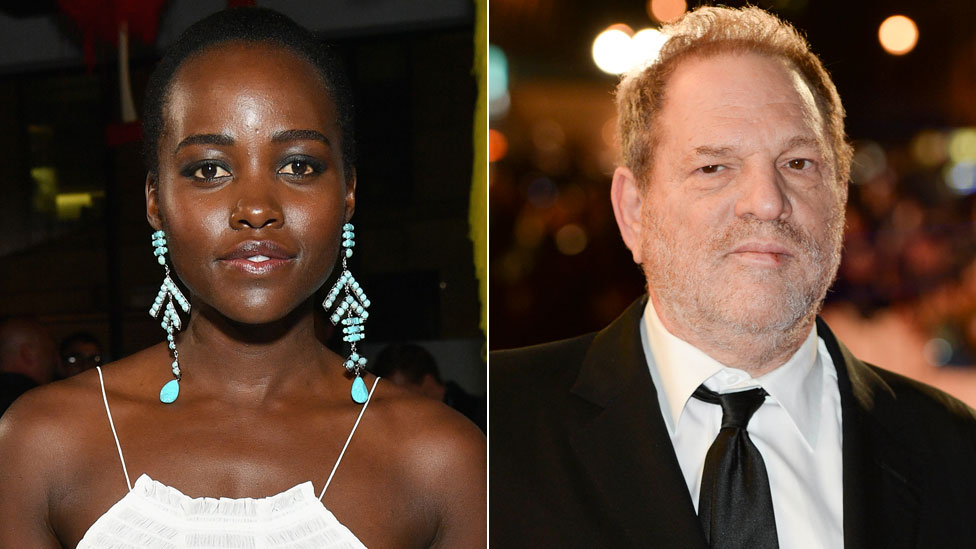