An independent barrister ruled Sampson made unacceptable “ill-judged attempts at humour” on two occasions, to Eniola Aluko and Drew Spence.

As the report of Katharine Newton’s reopened investigation was published, FA bosses faced uncomfortable questions over four hours at a parliamentary inquiry, with one MP labelling the organisation “shambolic”.

Chelsea striker Aluko, 30, said she felt “vindicated and relieved” by the barrister’s ruling but accused English football’s governing body of behaviour “bordering on blackmail” and an agenda to protect Sampson and its own reputation.

Aluko had said the FA was “dismissive” when she first claimed Sampson told her to make sure her Nigerian relatives did not bring the Ebola virus to the friendly against Germany at Wembley in November 2014.

Newton’s initial report, completed in March, had cleared Sampson, but new evidence from Spence led to her investigation being resumed.

Despite concluding Sampson had made remarks which were “discriminatory on the grounds of race”, she did not believe he is racist and said Aluko was not subjected to “a course of bullying”.

A report of the reopened investigation, which says Sampson had difficulty judging boundaries around banter, was released as FA bosses and Aluko faced a Department of Digital, Culture, Media and Sport select committee.

FA chief executive Martin Glenn said Sampson, who was paid nine months’ salary on his departure, may proceed with a wrongful dismissal claim.

He was sacked as England women’s boss last month after evidence of “inappropriate and unacceptable” behaviour with female players in a previous role.

What does the FA say?

In a statement, FA chief executive Glenn said he and his organisation wanted to “sincerely apologise” to Aluko and Spence and that it was “not acceptable” that they had been subjected to discriminatory remarks from an FA employee.

He said there was “much to learn from this episode”, that the FA needed a better way to support whistleblowers, and it was “regrettable” Aluko did not take part in Newton’s initial investigation.

Aluko, who has not played for England since making her claims in a 2016 FA inquiry into its management culture, explained she had not participated because she felt the first internal inquiry had been flawed.

At the hearing, MP Julie Elliott asked Glenn if he accepted the FA had failed in its duty of care to players.

Glenn: “We have clearly made mistakes.”

Elliott: “You can’t say you have failed in your duty of care. I think that speaks volumes.”

Sampson, 35, had earlier been cleared of wrongdoing by the internal inquiry, and Newton’s initial report, following discrimination allegations made by England players, including Aluko.

He said his conscience was clear, and denied being a racist.

FA chairman Clarke accepted criticism around the recruitment of Sampson in 2013, saying: “What should have happened was a process of due diligence – which does happen now – but did not happen then.”

He said there had been “systemic, historic failings” at the FA and added: “When I took the job, there was one other decent applicant. It’s career death. I’m willing to risk my reputation to make it better. If it doesn’t get better, it’s my fault.”

Newton said Sampson’s comments were discriminatory on grounds of race within the meaning of the Equality Act 2010, but that was not the same as concluding Sampson is racist.

Well, if the FA thought that that humiliating apology to Eni Aluko put them on the front foot then they were sadly mistaken after some devastating testimony from the former England striker.

What began as a dispute between a player and her national coach has become a scandal that threatens to engulf the entire FA and put some of the most powerful figures in the game under serious pressure.

I think the FA must consider that whereas in the past some of the crises have revolved around a failing England team or the sacking of national managers or the relationship with the professional game, this was all about their commitment to safeguarding, to whistleblowing and once again to their fitness to govern. And it’s highly unlikely that this sorry saga will end after today’s hearing.

‘A mess’ – What happened to Sampson?

Sampson was dismissed last month for unspecified “inappropriate and unacceptable behaviour” with female players in his job at Bristol Academy.

It emerged that, following a complaint in 2015, a safeguarding assessment found the following year that he did not pose a risk, but the FA’s leadership said that having been made fully aware of the details of the claims made against Sampson, he could no longer continue in his role.

The FA insisted its decision was not related to Aluko’s claims, but sports minister Tracey Crouch has described the situation as “a mess”.

Early 2014: Complaint against Sampson made relating to his time at Bristol

March 2015: FA safeguarding review panel concludes investigation and in October 2015 he is cleared to continue working in football

May 2016: England forward Eniola Aluko is asked to participate in a cultural review of all England teams by the FA’s technical director Dan Ashworth

December 2016: An independent investigation, led by barrister Katharine Newton, hears Aluko’s claims that during a meeting in 2015, Sampson made a “highly inappropriate remark”

March 2017: The independent review clears Sampson and his staff of wrongdoing but it is understood Aluko was paid £80,000 in a confidentiality agreement. The FA has said this settlement was to avoid disrupting England’s Euro 2017 preparations.

13 September 2017: FA says it received the full safeguarding review panel report on the allegations against Sampson

14 September 2017: The FA says it could re-open its investigation into racism claims against Sampson after further evidence is submitted

2 October 2017: FA chairman Greg Clarke says Sampson should have been sacked “years ago”

18 October 2017: FA apologises to Aluko and Spence for Sampson’s remarks 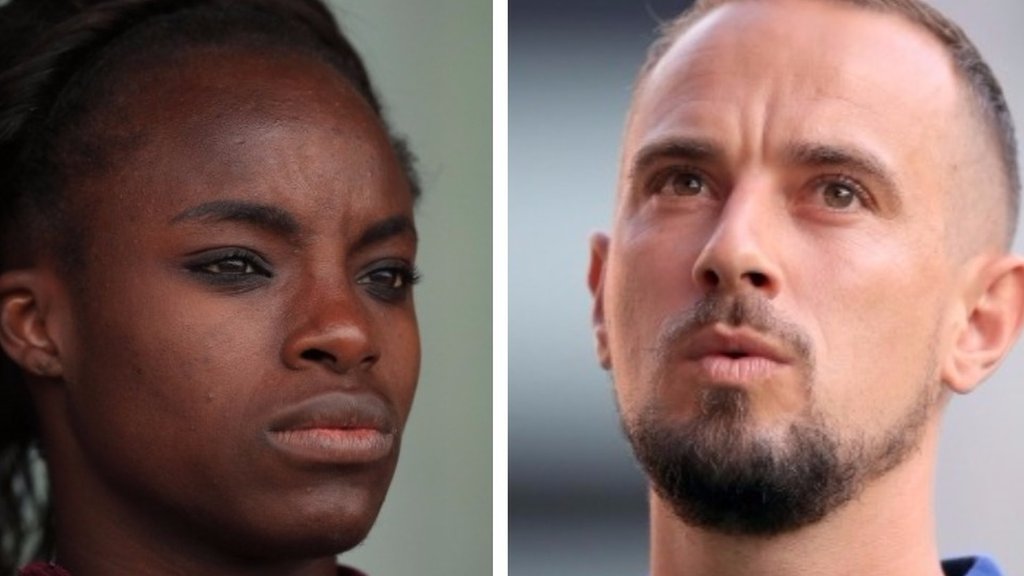