Liverpool boss Jurgen Klopp said it was “nice to write a piece of history” as the Reds thrashed Slovenian side Maribor to record the biggest away win by an English team in the history of the European Cup.

The Reds dominated throughout to go top of Champions League Group E with a scintillating performance.

The win eclipses 6-0 away victories by Leeds United over Norwegians Lyn in October 1969, and Manchester United against Irish outfit Shamrock Rovers in September 1957.

“I was told about the record after the game and I didn’t know,” said Klopp.

“The wonderful history of this club can feel like a backpack at times so it is nice to write our own good piece of the history.

“It will be difficult to beat that record. It is quite rare to win 7-0 but it showed we did unbelievably well.”

How the goals went in

Liverpool opened the scoring on four minutes when Firmino finished from close range after Salah broke free down the right.

Coutinho made it 2-0 with a half-volley from James Milner’s pull-back before Salah scored twice, finishing off passes from Firmino then Alberto Moreno as the Reds led 4-0 at half-time.

Firmino added a fifth with a flicked header from Coutinho’s free-kick as the Reds claimed their biggest Champions League victory since an 8-0 home victory over Turkish side Besiktas on 6 November 2007.

Daniel Sturridge linked up with fellow substitute Oxlade-Chamberlain for the latter to score his first goal for the club to make it 6-0, and Alexander-Arnold sealed the rout with a deflected 30-yard strike.

Liverpool had started their Champions League campaign with two draws – 2-2 at home against Sevilla and 1-1 at Spartak Moscow – but they never looked in danger of dropping points against a side second in Slovenia’s First League.

Leading 2-0 after 13 minutes, it became a question of how many Liverpool would score against woefully outclassed opposition, and the Reds did not disappoint as they produced a wonderful, free-flowing performance.

These two teams meet again in two weeks, and the Reds will be confident of another easy win at Anfield.

Halfway through the group phase, Liverpool are top, level on points with Spartak Moscow, who defeated previous leaders Sevilla 5-1.

Klopp’s side had won only one of their past eight matches in all competitions before this confidence-building performance, and the German was able to give some of his squad players playing time in the second half.

Perhaps with one eye on the Reds’ match at third-placed Tottenham on Sunday, Salah, Firmino and Georginio Wijnaldum were withdrawn in the second half to give Oxlade-Chamberlain, Sturridge and 20-year-old Dominic Solanke chances to impress.

Late on, Sturridge released Oxlade-Chamberlain and the England midfielder slotted past Jasmin Handanovic for his first goal since his £35m move from Arsenal at the end of August.

There was still time for Alexander-Arnold to score only his second Liverpool goal with a deflected strike from long range to seal a perfect night for the visitors.

Their defence, which has conceded 12 goals in eight Premier League games, has been heavily criticised this season, but this result means they have kept back-to-back clean sheets after a goalless draw against Manchester United on Saturday.

Klopp maintained his policy of rotating his goalkeepers for Champions League matches, and Loris Karius comfortably saved a low shot from Mitja Viler before Marko Suler headed Maribor’s only other chance wide.

‘We got everything we deserved’ – what they said

Alex Oxlade-Chamberlain told BT Sport: “We started with the right intensity, the manager said it would be a tough game and we couldn’t be complacent.

“Even at half-time he was pushing for us to do better and we got everything we deserved.

“We were very clinical and putting almost all of our chances away. It feels like we have a lot of goals in us, we create a lot of chances.

“This is a competitive team, we have had a few results that have not gone our way and I’m ready whenever I get an opportunity.”

Liverpool boss Jurgen Klopp told BT Sport: “Our attitude was outstanding – we were spot on from the first second.

“We scored wonderful goals, played wonderful football and it looked like they were not very good but is difficult to play against us. I love the fact we stayed really concentrated in the second half, we controlled the game and it was a very mature performance.

“You can struggle in a game like this if you do not have a 100% attitude, it was very mature. Seven goals was wonderful, but the counter pressing I was close to celebrating it, it was so good. They are a really good football team and they could not cope with this.

“All over, it was a really nice performance.”

Liverpool play in the Premier League at Wembley Stadium against Tottenham on Sunday, 22 October (16:00 BST), before a home game against Huddersfield on Saturday, 28 October (15:00 BST).

Liverpool and Maribor then play at Anfield in the next round of Champions League matches on Wednesday, 1 November (19:45 BST). 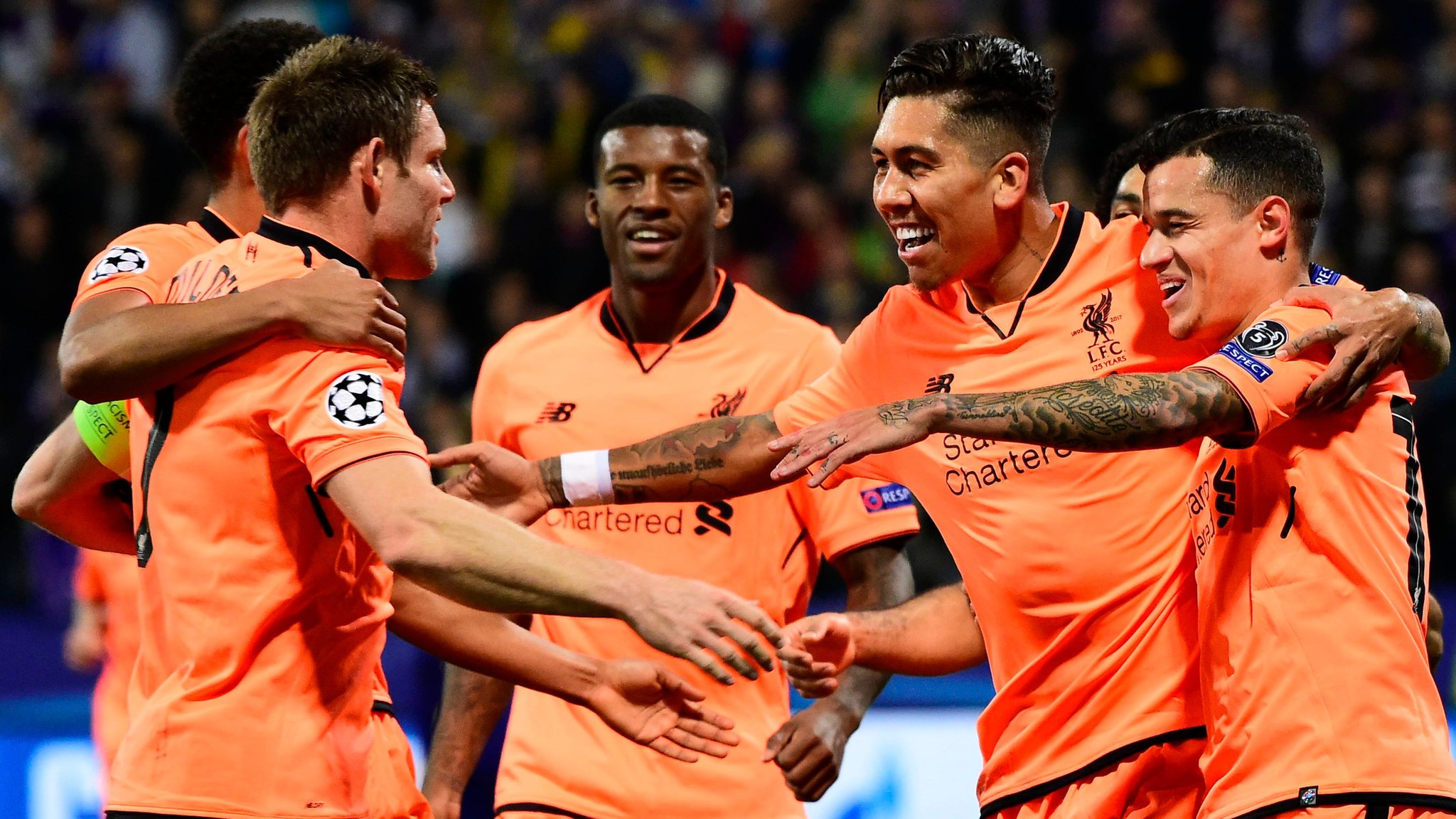