Timothy Weah, the son of Liberian legend George, says he is not overawed by the prospect of following in his famous father’s footsteps and that he can only profit from the situation instead.

Despite his parentage, Weah has been starring for the United States at the ongoing Under-17 World Cup in India where the striker scored a hat-trick in the 5-0 Round of 16 win over Paraguay on Monday.

Instead of feeling pressure about emulating his father, the only Fifa World Footballer of the Year to come from Africa, Timothy insists it can be a positive.

“I just use it as an advantage,” he told BBC Sport.

“My dad was a great player and it’s up to me to be the best that I can be – even if I don’t make it to that extent.

“I’m still going to try to be one of the best players to play the game. Following in my father’s footsteps is not a big deal to me.”

For the moment, the footsteps that Timothy is aiming to emulate are those that relate to football rather than any political desires.

During a prolific career in Europe with AS Monaco, AC Milan and Paris Saint-Germain, George became – in 1995 – the sole African to ever be crowned Fifa World Footballer of the Year.

Since his retirement, the 51-year-old has focussed on politics and next month, he will contest a Liberian presidential election run-off against challenger Joseph Boakai.

After nearly all the results from last week’s poll were counted, Weah led with 39% while Boakai, a reigning vice-president, took 29%. A candidate needed more than 50% of the votes for victory in the first round.

It’s a busy time for the Weah family, with Timothy trying to steer the United States to a first Under-17 World Cup title as George’s political aims intensify.

Nonetheless, the latter still finds time to offer advice to his son, who signed a three-year deal with George’s former club PSG in July.

“I talk to him nearly every night and he gives a little word of encouragement,” said Timothy of his time in India.

Born in New York, the youngster took more extended advice before the tournament from his father on how best to navigate the challenges of playing at a World Cup, a platform which George never once had the opportunity to grace.

“He told me to just play my game and be myself – that is the most important thing,” explained Timothy.

“He just said: ‘Be free, you have nothing to prove, just prove that you are the best player and you will have a bright future.'”

In reply, Timothy is reluctant to add to his father’s workload.

“He is going through a lot of pressure from the media and the people, so I just said: ‘Dad, you are the best and just keep on doing what you are doing and I know you are going to win this time,'” said Weah.

“My dad really loves and really helps his country, so I think leading the country would be the best thing for Liberia.”

In 2005, Weah finished runner-up to Johnson Sirleaf in elections which ended years of civil war in Liberia.

“This time, I feel they will get their votes’ worth and he is going to lead Liberia to a very bright future,” added his son.

In the meantime, Timothy is eyeing an Under-17 World Cup success which could partially atone for the senior United States team’s failure to reach Russia 2018.

The United States has never progressed past the semi-finals, which the nation reached for the only time in 1999.

“We take it upon ourselves to win this World Cup and take it back home to make our people happy,” explained Timothy.

“We are one of the best teams in the tournament besides stronghold teams like England and Spain. We can win the World Cup.

“Once we stick to our game plan and once we play with urgency and aggression, I think we can win all the games.”

Three more victories are required, starting with a quarter-final on Saturday against England in Goa.

Once the U-17 World Cup in India ends for the United States, ideally in the final on 28 October in Kolkata, Weah will return to PSG.

In August, the Parisian club shattered the transfer world record to acquire the services of Brazilian star Neymar – to the delight of Timothy.

“It is a motivation,” he said. “Neymar is my favourite player. Getting to possibly play or train with him is going to be amazing. He is not only playing the same position as me, but he is also an older guy and you can gain much from that.”

“My future goal is to make it into the first team, do a couple of sessions with them and hopefully by the end of the year make my debut.” 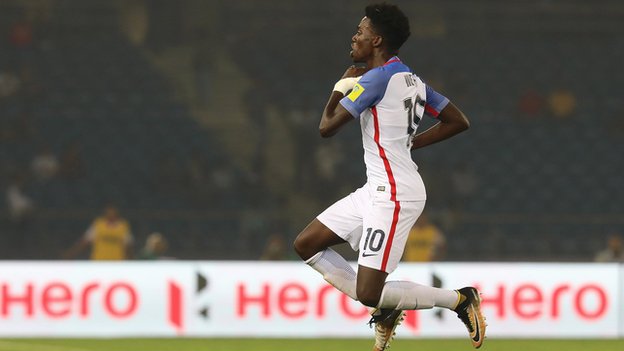