US Open squash champions Ali Farag and Nour El Tayeb are the first husband and wife in sporting history to win the same major singles title on the same day.

They were the first major World Series titles for the Egyptian couple, who got married last year.

“When I finished my match, I just wanted to watch him and I was so nervous,” said El Tayeb.

“It’s a dream – I see him every day working hard so it feels really special that both of our first World Series titles happen to be together.”

Farag added: “We couldn’t have asked for a better week and I hope it’s the first of many to come together.”

While this is the first time a married couple have won the same singles titles on the same day, there have been instances of other sporting couples winning titles together.

British badminton players Gabby and Chris Adcock won mixed doubles gold together at the 2014 Commonwealth Games and at the 2017 European Badminton Championships.

At Rio last year, hockey players Helen and Kate Richardson-Walsh became the first married couple to win Olympic gold together for Britain since sailors Cyril and Dorothy Wright in 1920.

Meanwhile, Jason and Laura Kenny, two of Britain’s most successful Olympians, won gold on the same day (16 August 2016) in Rio when Laura won the omnium and Jason won the keirin final. They married the following month. 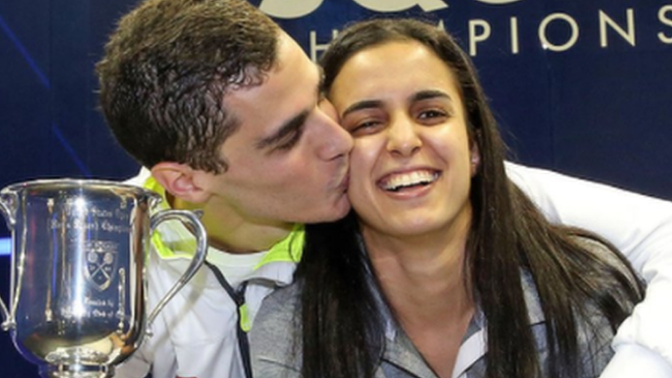