At least 276 people are now known to have died in a massive bomb attack in a busy area of the Somali capital Mogadishu on Saturday.

Officials say some people are then being evacuated to Turkey for medical treatment.

It is the deadliest terror attack in Somalia since the Islamist al-Shabab group launched its insurgency in 2007.

President Mohamed Abdullahi “Farmajo” Mohamed blamed the attack on the group, calling it a “heinous act”.

No group has yet said it was behind the bombing.

Among the victims was a medical student who was due to graduate as a doctor the next day.

Maryam Abdullahi’s father had flown in from the UK to attend her graduation.

Ms Abdullah’s sister Anfa’a told the BBC Somali Service that she was shaken.

“The family is so shocked, especially our father who travelled all the way from London to attend her graduation, but instead he attended her burial”.

Anfa’a said she had spoken to her sister 20 minutes before the blast.

“At that time she was in Banadir Hospital where she was working. She told me she was waiting for some files from the hospital and she promised to call back”.

A BBC Somali reporter at the scene of the main blast said a hotel collapsed, with people trapped under the rubble.

An eyewitness, local resident Muhidin Ali, told AFP it was “the biggest blast I have ever witnessed, it destroyed the whole area”.

Meanwhile, the director of the Madina Hospital, Mohamed Yusuf Hassan, said he was shocked by the scale of the attack.

“What happened yesterday was incredible, I have never seen such a thing before, and countless people lost their lives. Corpses were burned beyond recognition.” 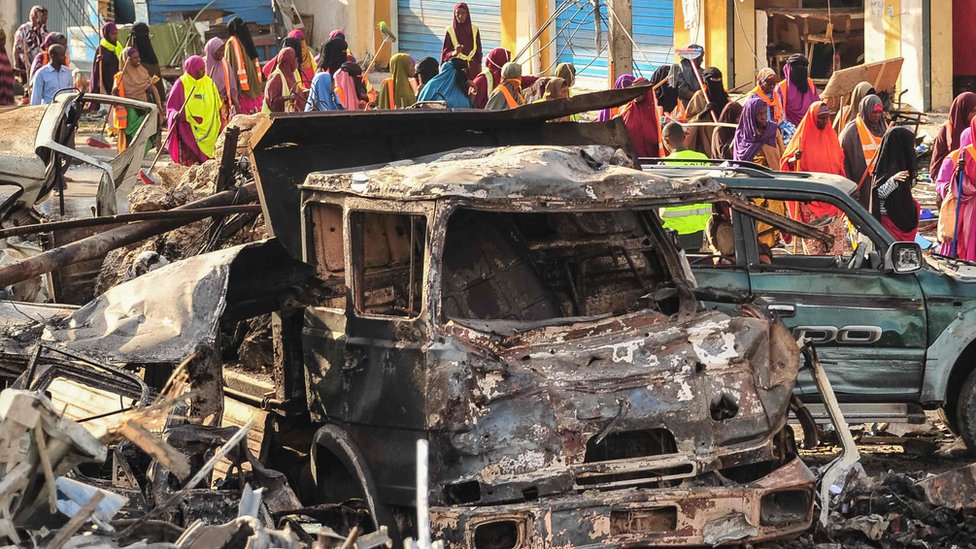