Niger reached the knock-out stage of the Under-17 World Cup in India on a day when Guinea crashed out of the competition.

Niger’s route to the Round of 16 marks history for a team making its debut in a Fifa competition in any age group.

Despite losing 2-0 to Brazil in their final Group D game, the Nigeriens progress as one of the best third-placed teams.

Guinea, meanwhile, were beaten 3-1 by Germany in Group C, in Kochi.

Three of Africa’s four teams at the finals are now through to the knock-out phase after Mali and Ghana both progressed on Thursday.

Coach Tiemogo Soumaila’s side were undone by first-half goals from Lincoln and Brenner, which gave Brazil a platform they never gave up.

Brazil finish top of the group with nine points while Spain, who beat South Korea 2-0 in Kochi, took second spot with six points.

The Junior Menas make it through to the Round of 16 courtesy of their opening 1-0 win against South Korea, which guaranteed their historic presence in the next round.

The South Koreans finish bottom of the group.

Guinea will count themselves unfortunate to be going home at the earliest stage after impressing against Germany only to come away empty-handed.

In an open game, Germany led after eight minutes through Jann-Fiete Arp only for Ibrahima Soumah to level matters just before the half-hour mark with his second of the tournament.

Nicolas Kuehn gave the European side the lead once more after finishing off a counter-attack after 62 minutes and it was only in stoppage time that the Germans clinched victory with a penalty. 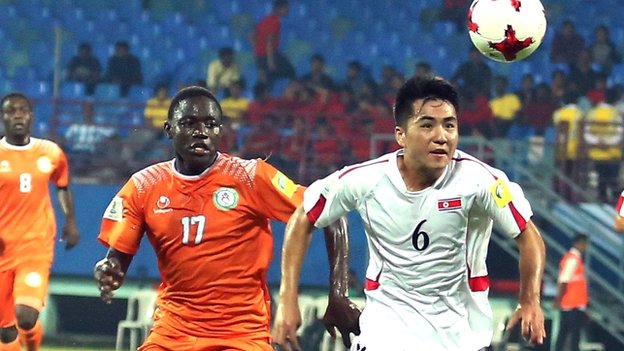