The inquest into the 1971 death of anti-apartheid activist Ahmed Timol has found that he was murdered, shattering a five-decade-long claim by security police that he had committed suicide.

In a packed courtroom, Judge Billy Mothle ruled that he “was pushed” out of the window of the 10th floor building where he had been detained by the apartheid police.

Applause rang out in court at the end of his ruling – vindication for the Timol family at last.

But what is the significant of the ruling for South Africa and other families who have lost loved ones in a similar way?

Many of those who were with Mr Timol at the time have since died but the judge found that they were “complicit” in his death and recommended that prosecutions should follow because perjury had been committed by some former state security members who testified at this hearing.

And so for the first time in the history of its atrocities, it seemed as though the apartheid system of white minority rule was on trial in South Africa.

The inquiry offered a rare glimpse into the gruesome workings of the racist regime – and demanded answers.

For those brief few weeks it was as though Mr Timol was speaking for himself – and on behalf of those who died like him.

Mr Timol’s family had for years campaigned for a new investigation, saying he was not “one to give up” – that he would have never taken his own life.

Many other families here have for decades struggled to make peace with the deaths of their loved ones – largely due to the secrecy around it.

Activists say that between 1963 and 1990, at least 73 anti-apartheid fighters people died in police detention, in some situation their deaths bore an uncanny resemblance to that of Mr Timol.

Still no-one was ever called to account – the murderers were faceless, protected by the state even after the advent of democracy in 1994.

For the Mabelane family, this case has inspired hope. Matthews, then aged 23, was said to have jumped to his death, like Mr Timol.

His older brother Lasch Mabelane tells me the family has for decades been haunted by not knowing what really happened to Matthews.

“The day before he died, the police came to my parents’ home and told them they need to make an appointment if they want to see him. They said: ‘Do you know you have a naughty child?’ and said they would discipline him,” he says.

“Many people like my brother supposedly jumped from the 10th floor, it’s the same story – the same floor,” he adds.

“We’ve never believed that he killed himself, he loved life and loved his family. The pain of losing him changed all of us, especially my parents.”

His father, Phillip Mabelane is 95 years old and a widower – he believes his wife died of a broken heart.

“Our child died in a painful way. We were left with so many questions and couldn’t even ask them. This trouble my wife until the end,” he says.

“The apartheid police were known to be violent, you didn’t ask questions, you just accepted what you were told. How can you ever find peace in a situation like that?” he asks.

Taking secrets to the grave

Peace and stability in this country were paid for in blood and an unspoken vow by those who worked for the state to take secrets to the grave.

This country’s vast landscape is dotted with the unmarked graves of apartheid activists. Dinner table conversations frequently drift into stories of exiles who disappeared without a trace – leaving behind a trail of unanswered questions.

The Timol inquest could forever change that legacy.

This was the first inquest in democratic South Africa to specifically look into apartheid deaths in police custody.

While an investigation into Mr Timol’s death was conducted at the time, many had believed it was a cover-up for the abuses that were happening at the height of white minority rule.

The long-awaited proceedings took weeks to conclude but had many glued to TV screens as high-ranking security police officers, men who until now had lived in the shadows, testified about the torture of activists at the height of the fight for freedom here.

In August fresh eyes began looking at the evidence led in court.

Some of the expert witnesses testified that some of Mr Timol’s injuries, his cracked skull, were not consistent with the conclusion the apartheid police had reached at the initial inquest back in 1971.

Files with evidence of his bludgeoned body told tales of assault, witnesses testified to seeing Mr Timol days before his death being escorted by the police in the corridors of the police station and that he could barely walk.

These records are some of what led to Judge Mothle’s historic findings.

Mr Timol isn’t the only activist to die under suspicious circumstances – Steve Biko also died while in police detention, supposedly because he had been on a hunger strike. No explanation was ever given for the bruises on his body.

In the minds of many, Mr Biko was murdered.

Nkosinathi Biko, through the Steve Biko Foundation, says their research puts the deaths of high-profile detainees, including his father, at 160.

“Many of them have as a cause of death, suicide or slipped on a bar of soap, that sort of thing. So uncovering the truth is important not only for those families but for the country. It should be a national record,” he told the BBC.

There have been attempts at unearthing the truth in democratic South Africa such as the Truth and Reconciliation Commission (TRC).

However, in recent years the TRC’s failure to compel apartheid loyalists who testified at the commission to “tell all” has come in for increasing criticism, along with granting perpetrators amnesty for their testimony.

While the hearings were hailed as a necessary process to help move the country into a peaceful democracy, many said it denied justice to victims of apartheid.

In the minds of many, justice will only come if those behind the murders and torture are prosecuted and punished for their crimes.

“You cannot forgive what you do not know, what was never acknowledged. The people who killed our children must be made to tell the truth and face the consequences of their actions,” Mr Mabelane Snr says.

And for the first time it seems the scales of lady justice are tilting in the favour of those long forgotten, men and women whose names have not made it into the history books. 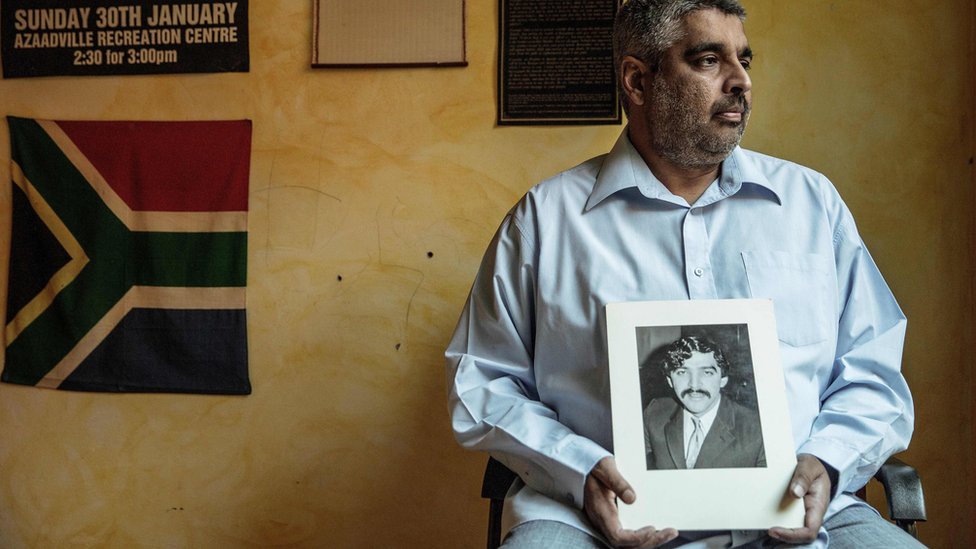