Five arrested in Delhi over assault on African

Police in the Indian capital Delhi have arrested five people after a video circulated showing what appears to be a mob severely beating a Nigerian man.

They have also detained the Nigerian, whom some residents accused of theft.

The video shows four or five men using sticks to beat a man of African appearance who has been tied to a post.

There was a spate of attacks on African nationals living in India last year, including one in which a Congolese man was beaten to death in Delhi.

Police said the latest incident happened on 24 September, and the Nigerian victim was also arrested due to a theft allegation.

A resident of the Savitri Nagar neighbourhood claimed the man broke into his house and tried to steal valuables from his room, police said.

“It is a case of attempted burglary. Those living in the house got alerted. They caught him and beat him up,” Dependra Pathak, chief spokesperson of the Delhi Police told the Press Trust of India news agency.

In March, five Nigerian students were attacked by crowds, while another was beaten by a mob inside a shopping mall living in Noida, near Delhi.

Six months ago, African ambassadors in India criticised the government for not doing enough to stop a string of alleged racist attacks on Africans in Delhi. 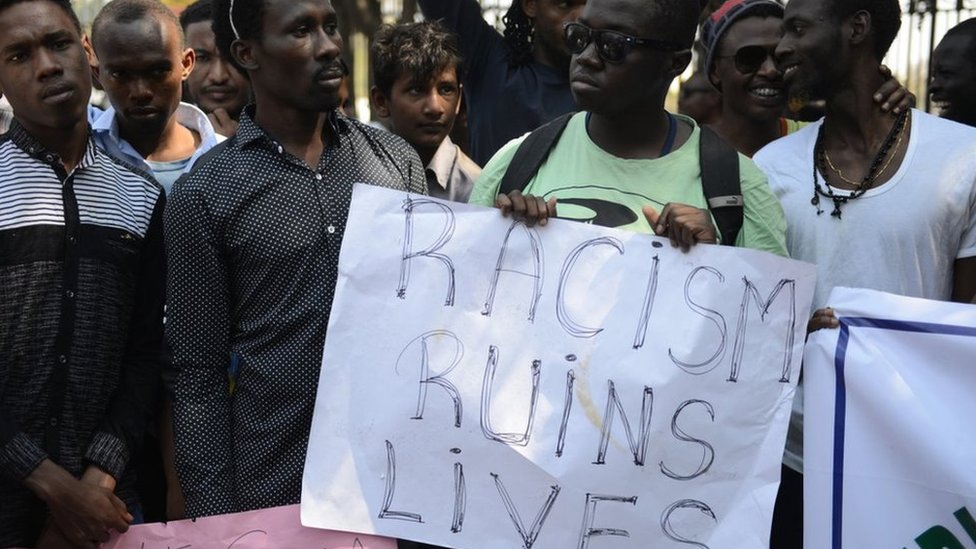