Hosts Uganda and the Black Stars of Ghana had to settle for a goalless draw in their 2018 World Cup qualifier at the Mandela National Stadium in Namboole on Saturday, a result which takes their qualification hopes out of their hands.

The draw virtually ends Ghana’s hopes of reaching Russia, although Uganda will hope that Congo Brazzaville can defeat Egypt on Sunday.

A victory for the Pharoahs against Congo in Alexandria will put Egypt through with one match remaining.

Only the five group winners will qualify for Russia 2018 from Africa.

Uganda striker Emmanuel Okwi kept the Ghana defenders busy with his quick runs which – one of which resulted in Ghana skipper Daniel Amartey getting booked.

Farouk Miya blasted wide from a free kick after six minutes, while Okwi’s cross cross after 17 minutes was also punched out of danger by Ghana’s goalkeeper Richard Ofori.

After 34 minutes Daniel Opare had a chance for Ghana, but his shot from a corner kick missed the target.

Despite a tricky playing surface, Ghana looked comfortable on the ball, but still lacked the killer punch in-front of the Uganda Cranes goal.

Daniel Nsibambi came close for Uganda, but with just the goalkeeper to beat he headed out a well taken Geoffrey Walusimbi cross.

In a tense finish, Okwi had a shot saved, and Ghana thought they had scored in the dying seconds only for the strike to be ruled off-side.

“I think it was a good goal because the goalkeeper punched back the ball,” said Appiah after the match.

As for the Cranes coach Moses Basena, he said he was disappointed they failed to collect three points.

“We shall keep working hard because this is a young team,” Bassena said. 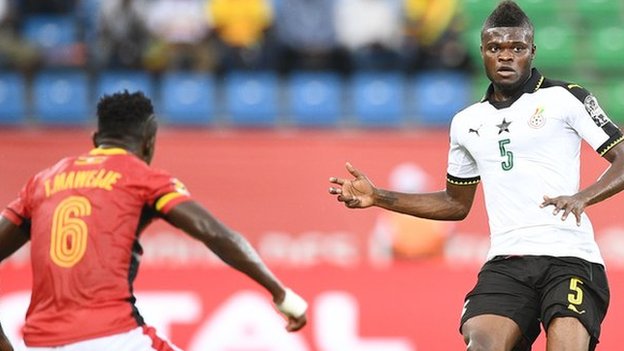