Debutants Niger made history on Saturday by winning their first match at the Under-17 World Cup in India, but Guinea were beaten in their opening group fixture.

Niger were 1-0 winners over North Korea in Kochi to record a victory in their first Group D match.

Salim Abdourahmane struck Niger’s goal in the 59th minute to seal the win.

Brazil are top of Group D after a 2-1 win over Spain.

Niger will next play Spain on Tuesday.

In Goa, Guinea fell to a 3-1 win to Iran in their first match of Group C.

After a tight first half, Iran raced to a 3-0 lead in the final 30 minutes of the match with goals from Allahyar Sayyad, Mohammad Sharifi and Saeid Karimi.

Guinea got a consolation goal in stoppage time through Fandje Toure.

Iran are top of Group C followed by Germany who beat Costa Rica 2-1.

Guinea, who are bottom of the standings, face Costa Rica next on Tuesday. 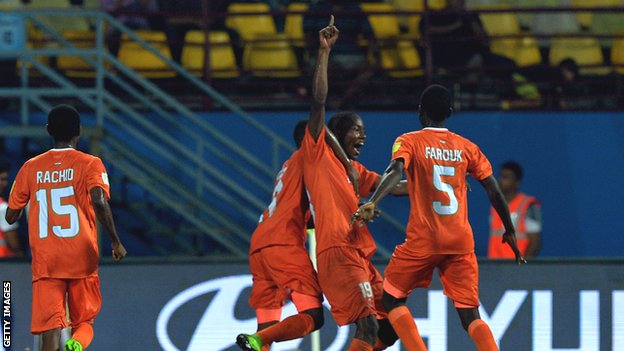